Last Tuesday on CNBC’s Fast Money I was asked about some signs that might think are signaling that we are close to capitulation, I had the following to say:

Another wild day for stocks with the market making a huge comeback. But @RiskReversal says Microsoft and Apple are the two stocks to watch for a “sign of capitulation” in the broader market. $MSFT $AAPL pic.twitter.com/bik43i64wz

The last bit about the two largest market cap companies in the U.S. (AAPL & MSFT), two stocks that had shown decent relative strength from the highs vs the broad market and many mega-cap tech stocks, is the one I want to focus on here. Shares of AAPL are down about 11.5% over the last two trading days vs the S&P 500 (SPX) which is down about 7% during the same period. AAPL is now down 35% on the year, and down 33% from its 52-week and all-time highs made last month, now in line with the sell-off from the highs in-line with the SPX. It is worth noting that since 2012, AAPL has had three other peak to trough declines of at least 30% and in all three instances the stock doubled in the next couple years from the bottom: 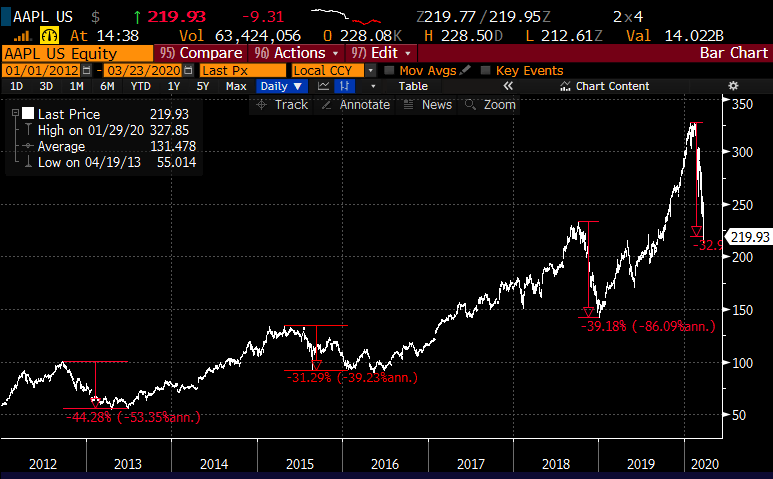 The trillion-dollar question for AAPL shareholders or those looking to initiate a new position in the stock is how much further can it go?

Well, there are a few really important things to consider in the near-term about AAPL’s business. First things first, China, where all of their iPhones are made, and a good bit of their future growth is expected. AAPL’s nearly 40% sell-off from its highs in 2018 was largely predicated on fears of trump’s brewing trade war with China causing production disruption and weaker demand due tariffs in China, a region the company gets between 15 and 20-% of their total sales from. Prior to trump calling the coronavirus the “Chinese Virus” which many Chinese here and abroad find offensive because of the context in which it is used, AAPL was already losing smartphone marketshare in China to local OEMs to under 7% in Q1 2019, in 5th place.

The push to deglobalization that started in 2018 with trump’s trade war, and now the disruption to our manufacturing supply chains will dramatically accelerate and I would look for companies like AAPL to bear the brunt of consumer nationalism.

I would also add that a big part of last year’s 85% gain in the stock in a year where the company did not grow sales, earnings, gross margins or iPhone units and Services, the new new thing for them grew only in the high teens, was the concept, yep again that there would be an “upgrade supercycle” in the fall due to the rollout of new high-speed 5G phones. That is NOT happening this year, not only because AAPL won’t have the hardware due to manufacturing disruption, but I suspect wireless carriers have curtailed spending on the buildout of the networks and who the hell in this environment is going to be buying $1000 phones sooner than they need to so they can download Stranger Things from Netflix faster??

AAPL’s PE multiple nearly doubled last year from about 12 in January to about 23 in Sept, that in a year where EPS was flat, so purely in anticipation on what could happen in 2020. Well it ain’t happening in 2020, and while estimates have started to come down since the company pulled their fiscal q2 guidance in Feb, consensus estimates are still calling for 11% eps growth and 4% sales growth in fiscal 2020.

To my eye on purely a technical basis the stock looks to have decent near-term support dating back to early 2019 between 200 and 180ish, another 10% on the high-end and around 18% on the low end, which seems a tad extreme (assuming the global recession is short and shallow): 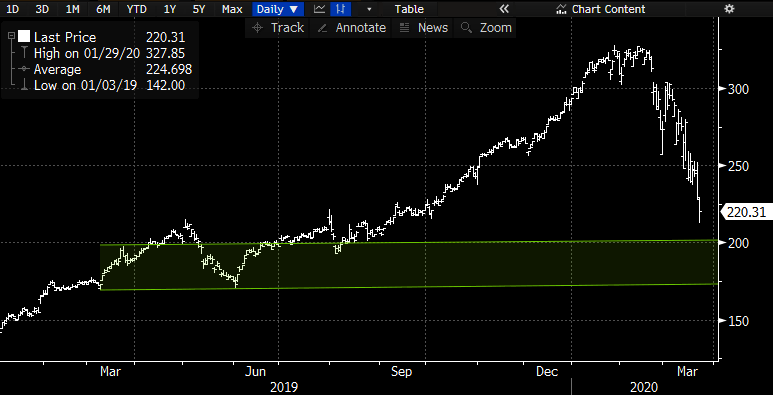 For those looking to express views in the name with defined risk its worth noting something usual has happened, where 30-day at the money implied volatility (blue line below, the price of options) is moderating a bit while 30-day at the money realized volatility (white line below, how much the stock is moving) is at multi-year highs, some might suggest they are cheap on a relative basis, but that would only be the case if realized stayed this elevated, which it is not likely to do for more than a few more days:

It is worth noting that because realized vol is screaming and implieds are below, short-dated call sales for those who are long, don’t look that attractive. If you were long, no going to sell, but looking to sell some calls against the stock to take in some high premium (yield) you would want to do so at least 10% out of the money for a month out… For instance with the stock at $220 the April 240 call is $8 bid or about 3.3% of the stock price. If you were long and sold that call and the stock closed below 240 on April expiration you would bank the $8. But if the stock were above 240 on April expiration than your gains would be capped at 240, plus the $8 in premium, so effectively your call-away level is about about 13%, that seems little too tight for that yield and an 8 buffer to the downside. The options market suggests there is about a 34% chance of the stock being at 240 on April expiration.

There will be a great buying opportunity for AAPL true believers, but even if the stock bounces from severely oversold levels, I would be shocked if it makes “buy of the next few years” low… the stock was way overbought coming into this sell-off with unusually high sentiment. I suspect that the challenges facing the company in this new world order are unique, but investors will lean into their balance sheet, cash generation, execution, and innovation history and there will certainly be new and cool products to come, just not in 2020.