Last night while I was on CNBC’s Fast Money, as we were talking about the potential capital needs of Boeing (BA) and the market rumors that they were seeking a financial lifeline from the government, news broke that BA board member, Nikki Haley, the former Governor of South Carolina and most recently under the current administration, Ambassador to the United Nations resigned from their board after a little more than a year. Despite being a critical time for the company, navigating our country’s largest exporters’ future and the future of its 160,000 employees (not to mention the tens of thousands in their supply chain), Haley thought best for her to consider the future political ramifications of being associated with a government bailout. Sad!

Here was my take on air, and my comment on Twitter after I had a little more time to think about it:

Feckless corporate ambassador…If she was still South Carolina Governor & $BA was the largest employer in her state, in need of a bailout, she’d be tip of the spear despite the risk to her future political ambitions. I suspect we see lots of R’s jumping off lots of ships in 2020 https://t.co/IBE8IY39On

My comment on CNBC has little to do with how we got here, all of these very important industries to our economy (travel, aircraft manufacturing, autos, energy, homebuilders, retail, including the millions of small businesses), will all likely need to be bailed out in some way shape or form, which is not including what needs to come first, directing cash to our most vulnerable citizens asap. If you didn’t agree with the bank, auto, airline and insurance bailouts of the last couple of decades for fiscal and or political reasons, then you are likely to find it equally distasteful this time around. While the reasons will be very different, act of god, unpreparedness, lack of political leadership to avert a crisis… the illusions of economic well being for the last few years have all been a mirage. The tax cuts enacted on Jan 1, 2018, where the admin cut critical funding on pandemic prevention (among other things) to push through a corporate tax cut where we borrowed $1.5 trillion from the future and handed it the largest, companies in our country so they could over the course of 2018 and 2019 buyback their own stock to the tune of $1.5 trillion has exacerbated the so many economic and market problems. Oh and the exploding U.S. budget deficits, which was not supposed to be a problem because growth was going to pay for the tax cuts, not only did they not stimulate growth, they, of course, but also did NOT pay for themselves, putting our Treasury in that much weaker of a spot to combat an unforeseen economic shock like the one we are faced with now. This was compounded by the fact that trump emboldened by his tax win, started a multi-front trade war in early 2018 not only with our arch economic enemy, China but with our allies in North America and Europe, serving as a severe headwind to global growth at the exact wrong time. Oh and I’ll save the Fed’s contribution to this mess for another post.

The trump economy as many were calling it in the financial press in 2017 & 2018 (which made me cringe every time a real journalist on a non-propaganda network would speak it) was much like his business career prior to becoming a politician, all smoke and mirrors, and the “stock market president” who for years viewed the market as a barometer of his success, cheerleading the whole way up, now defending it the whole way down has now seen virtually all gains since his election go up and smoke, and we are likely to be left with financial devastation in its wake, long after he is likely booted out of the White House in November. 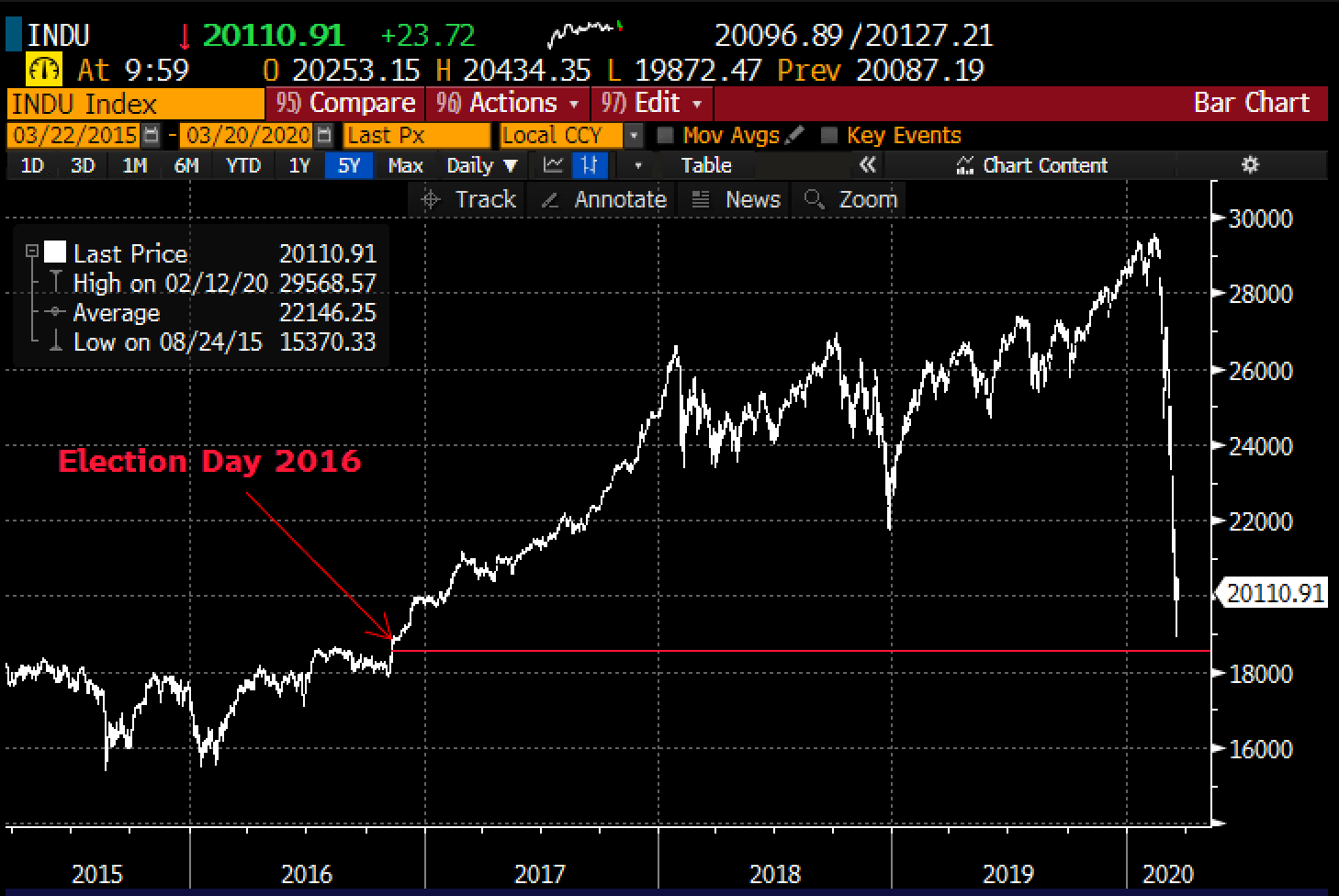 So trump sucked at capitalism in the private sector, he is proving to be far worse in the public sector and he may end up presiding (for a short term) over the largest socialist experiment in the world’s history.

We need to get better at capitalism. We have become very good at allotting the winnings of this system to a smaller and smaller group and more frequently socializing massive losses that have further exacerbated what I thought until a couple of months ago was one of the largest existential threats to our country, income inequality.

Delete and unfollow any pundit or advisor who is telling you we will see a V reversal in the economy and financial markets, even in the best-case scenario of a shallow health crisis, it will all take more time than we hope and think is practical to dig out of this economic quagmire.