Today is my 20 year wedding anniversary. For lots of reasons, I don’t have a hard time remembering how many years I have been married, largely cause of the nice round number of the year I got married in. I met my wife in the months after we both graduated from college in 1995, and the rest you might say is history. At 47 years old, we have spent more than half of our lives together… both sets of our parents in their late 70s have been married for more than 50 years, or about two-thirds of their lives… it’s weird how the numbers work… once you starting testing them, they go higher and it becomes less easy to control the narrative.

Another reason why I don’t have a hard time remembering my anniversary as I readied myself to shut down my trading book for more than two weeks in March 2000 for the wedding and honeymoon to Asia as the stock market was making some fairly weird palpitations at what was then all-time highs. Many called for a top and a correction, but what was to come over the next two years, specifically in the Nasdaq which was ground zero for most of the excess in the financial markets (that bled into the economy), was not what most bears had wished for.

From the day I started in the business at a hedge fund firm in January 1997 to its highs the week of my wedding, the Nasdaq Comp rallied 300%. From my wedding to its lows in October in 2002, the Nasdaq lost nearly 80% of its value.

While the dotcom bubble burst was the story of 2000 and early 2001, the attacks of 9-11 and the response to our new world order was the punctuation to a deep but fairly short recession (less than a year). 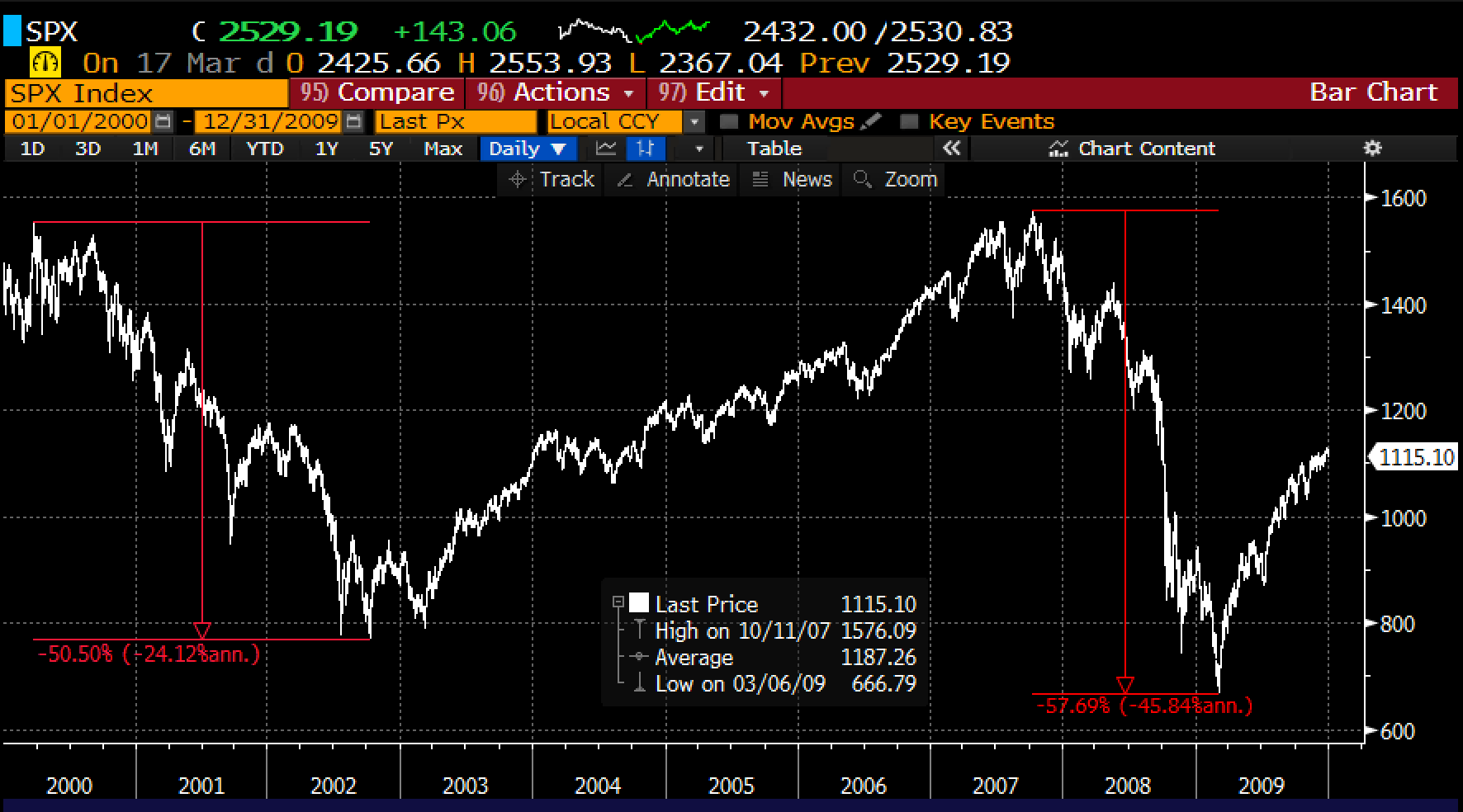 What we face now appears to be a mixture of the two prior recessions, a very different market structure than in both prior market crashes, and what many would argue is a near impotent central bank, whose toolbox has been dramatically depleted after years of easy monetary policy.

Last night on CNBC’s coverage of the market turmoil, that we used to call Fast Money, I was asked about what were some clues that might give us a sense that we are near a bottom or capitulation?  To summarize, bottoms are processes where capitulation might merely be a waystation. Back in 2001, there were two 20% rallies off of then lows, and one in 2002, all three failed and saw new lows.

Another wild day for stocks with the market making a huge comeback. But @RiskReversal says Microsoft and Apple are the two stocks to watch for a “sign of capitulation” in the broader market. $MSFT $AAPL pic.twitter.com/bik43i64wz

Time and exhaustion will be important ingredients for a bottom. I would also highlight the point I made about Apple (AAPL) and Microsoft (MSFT), the two largest market cap companies in the U.S., both outperforming the broad market in peak to trough decline and year to date losses, and both still well off of their 52-week lows and year over year levels, I suspect we will not have capitulation until both have just been tossed on the trash heap with so many other fine companies. The absolute destruction to transports, industrials, financials, energy, consumer discretionary, homebuilders and recent tech IPOs have been draw dropping in such a short time, I am not sure they have too far lower too go in the near-term.

Near term, I expect the extreme volatility (5-10% daily moves) to subside, to let investors regroup a little bit, and that is likely to come with the passing of a massive fiscal package from Congress and signed by the White House. But the headlines on the virus are likely to get worse before they get better and I would expect a new low coming off of however violent a bear market rally we get in the coming weeks/months.

On March 6th on CNBC’s Closing Bell, when we were then remarking on the 3-4% daily moves, which then equated to about 1000 points in the Dow Jones Industrial Average I was asked if the late Friday rally of 1000 points signaled a near term bottom… my answer was a resounding NO… basically what comes next won’t be particularly comfortable:

There is little to celebrate at the moment, we are in the hands of the unknowable on so many fronts, our health, our livelihoods, our savings, our democratic freedoms… it all seems fairly bleak at the moment, and as my wife and I have had to explain on numerous occasions to our two teenage daughters over the last couple weeks, we are in unprecedented times, and we all need to hunker down, change our mindsets a bit, but be constructive, hopeful and kind. I am happy to hunker down and face these challenges with someone I have spent the last 25 years with, in mostly good times, it has set a very sound foundation for battling through what comes next and I think the same can be said for the stock market.

For those looking for a little levity, you have to check out Seth Rogen’s commentary last night living tweeting the movie cats (here), it is one for the ages…

Also, if you want to watch another movie with Rogen, one that he starred in, co-wrote and co-directed, that was made for this time, it’s This Is The END, probably one of the funniest movies of the last decade. I woke up like McBride this am!