Aside from the social distancing that we are all practicing to avoid the spread of the coronavirus, my good friend and long time writing partner CC Lagator yesterday remarked that my morning missive (He has no idea… no idea what it is like out there… They Know Nothing) yesterday based on some of the email and tweet traffic received was a great attempt at “social distancing myself from the MAGA crowd”, leaving me more time to interact with investors who believe whether to wash one’s hands is not a political act.

This morning I got a tweet asking a question I have heard many times over the last couple of months, but for two very different reasons:

Back in January and early February when the stock market waa still screaming, coming off of an astounding 29% gain in 2019 that was fully predicated on the hope that the trade war headwinds would subside and despite no expected earnings growth for the year, that U.S. corporations were uniquely positioned to reap the benefits in 2020. That looked to be the case as it was hard to find a soul, including the president of the United States, who were merely worshiping at the altar of price when the S&P 500 (SPX) was at its highs on Feb 19th:

In my 25 years in the stock market, I have heard the old saying hundreds of times, “no one rings the bell at the top” well this ding-dong did, causing me to write (Pride Goeth Before the Fall). In my entire career navigating financial markets, a business where most who are outside the business look for trustworthy sources to help them make decisions about how to manage their money, never have a seen such an intellectually dishonest take, at the exact dead high. I have circled the date of the tweet on the chart of the SPX, it’s uncanny: 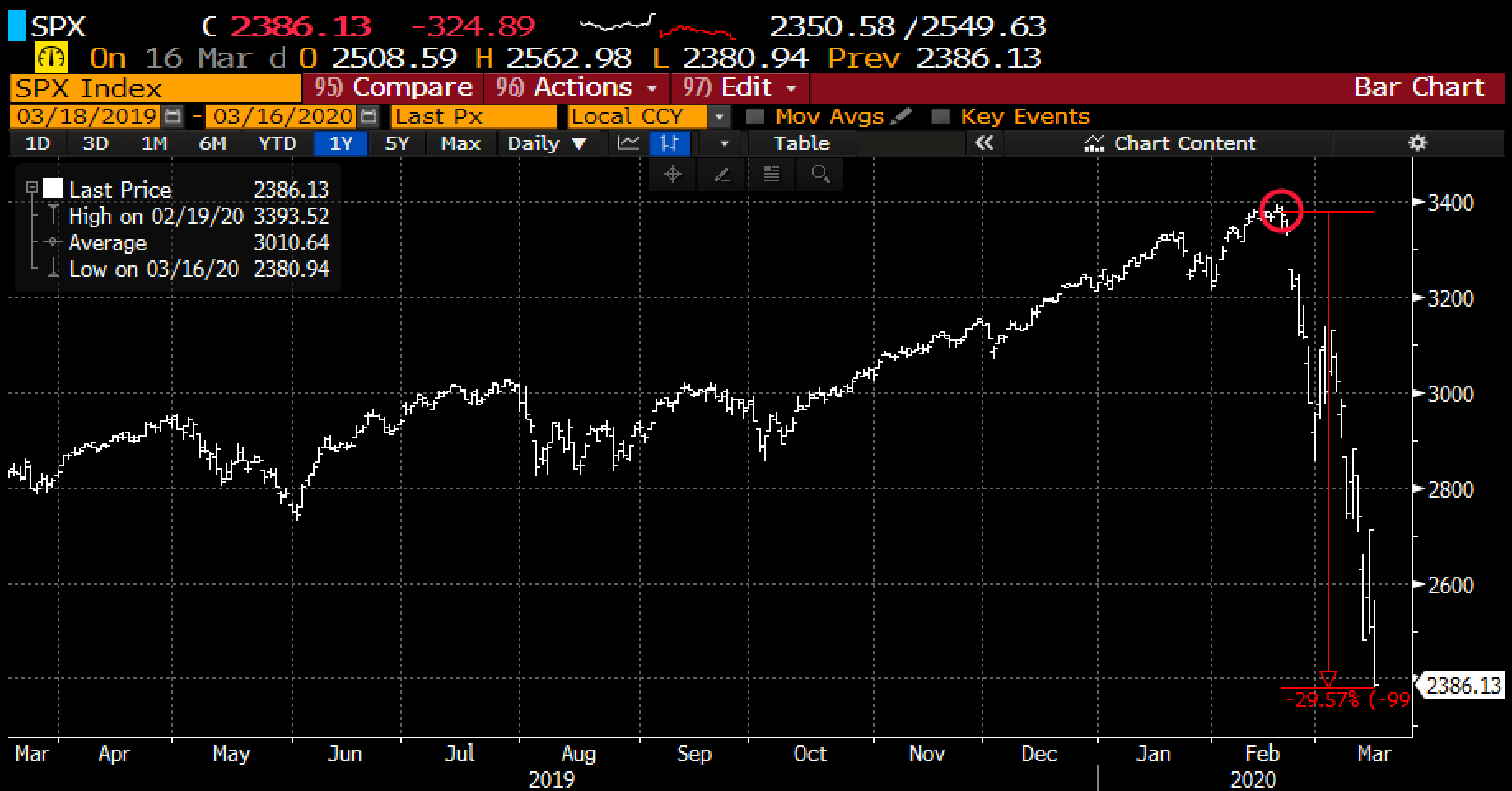 My answer to @MauiMeow00 is quite simple, but it is important to have a sense of history: 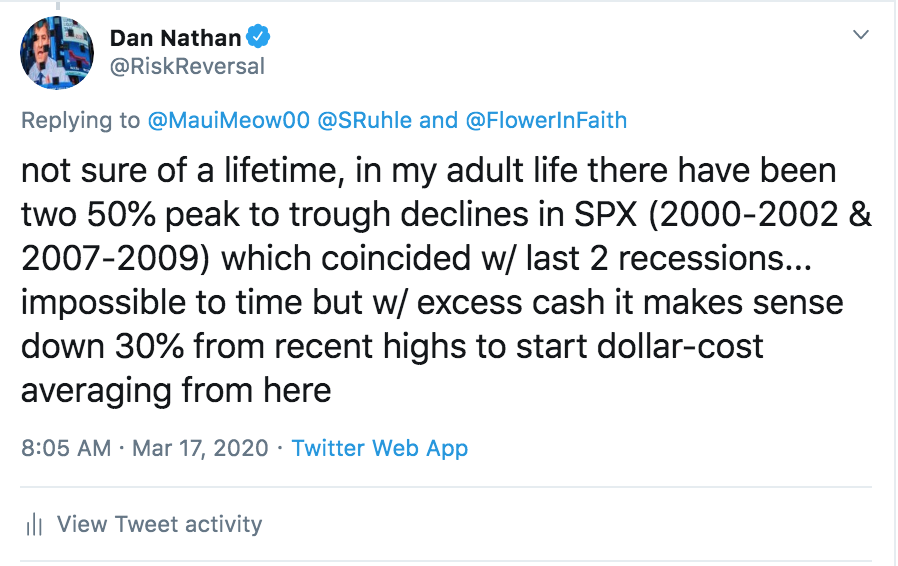 Those two recessions were caused by two very different excesses, I suspect what we have here this time around is a combination of the prior two but a toolbox now to combat a recession and market crash a bit more creative despite being somewhat depleted. I have no idea how this ends, but if we assume that at least a mild recession is in the cards, likely at least two quarters, but likely more, and we take the average of the last two SPX declines which is about 53% and take that off of the recent highs, then we get very near the prior two highs from 2000 and 2007 which should serve as massive technical support: 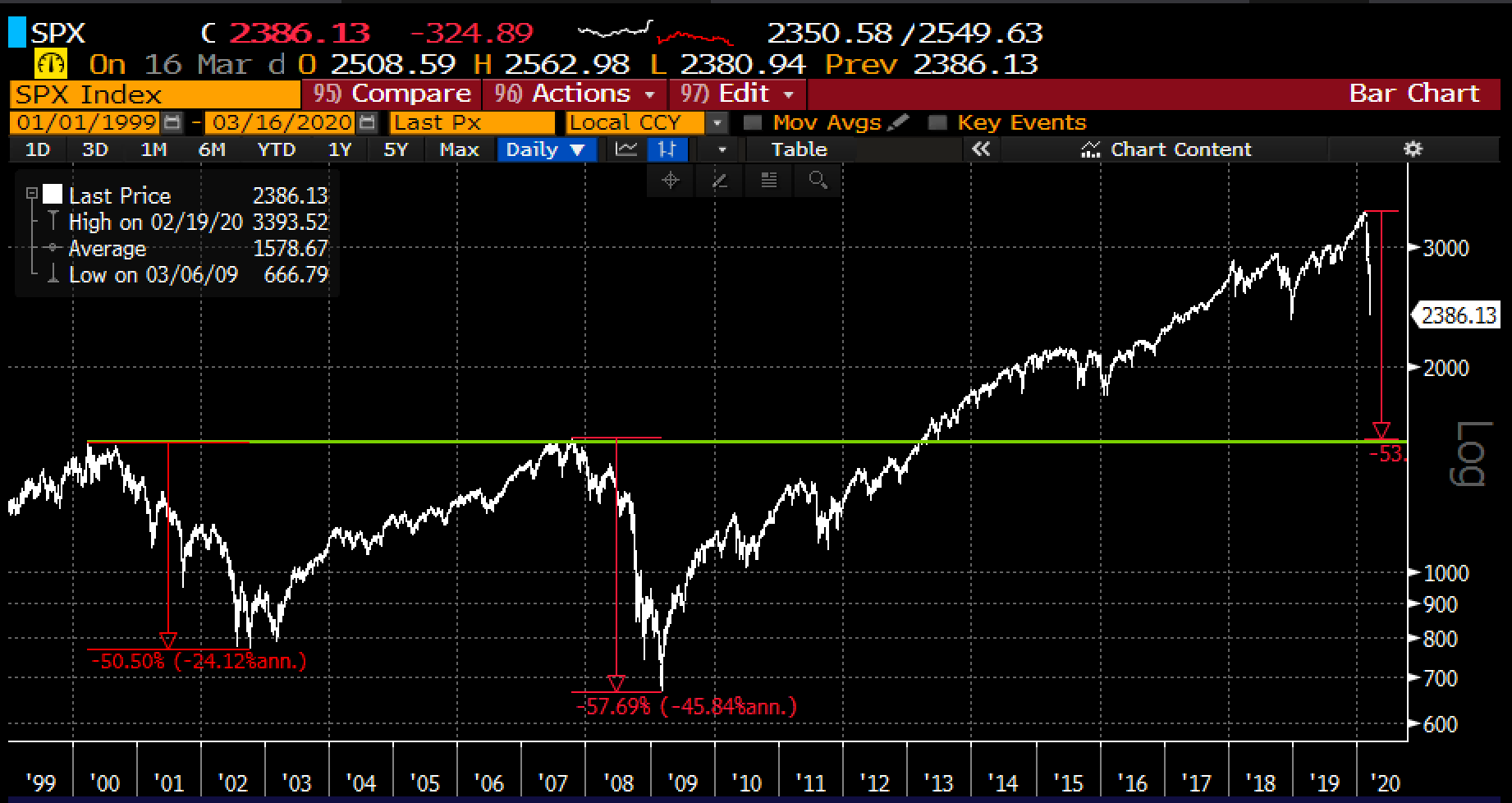 THIS IS NOT A PREDICTION. My point is simple if you have cash if you are a long term investor if you realize it is nearly impossible to nail the bottom, then starting to dollar cost average into the SPX makes sense knowing that there is more room to the downside, which is why you leave dry powder. Could the stock market turn on a dime today and yesterday’s worst point decline in the Dow Joans mark the bottom? Sure, but it is not likely… Bottoms are processes and one of the defining characteristics is usually time.

I will point you to some data from Michael Batnick of Ritholtz Wealth Management who suggests in a recent blog post “As stocks decline, they become more dangerous in the short-run but more attractive over the long-run”: 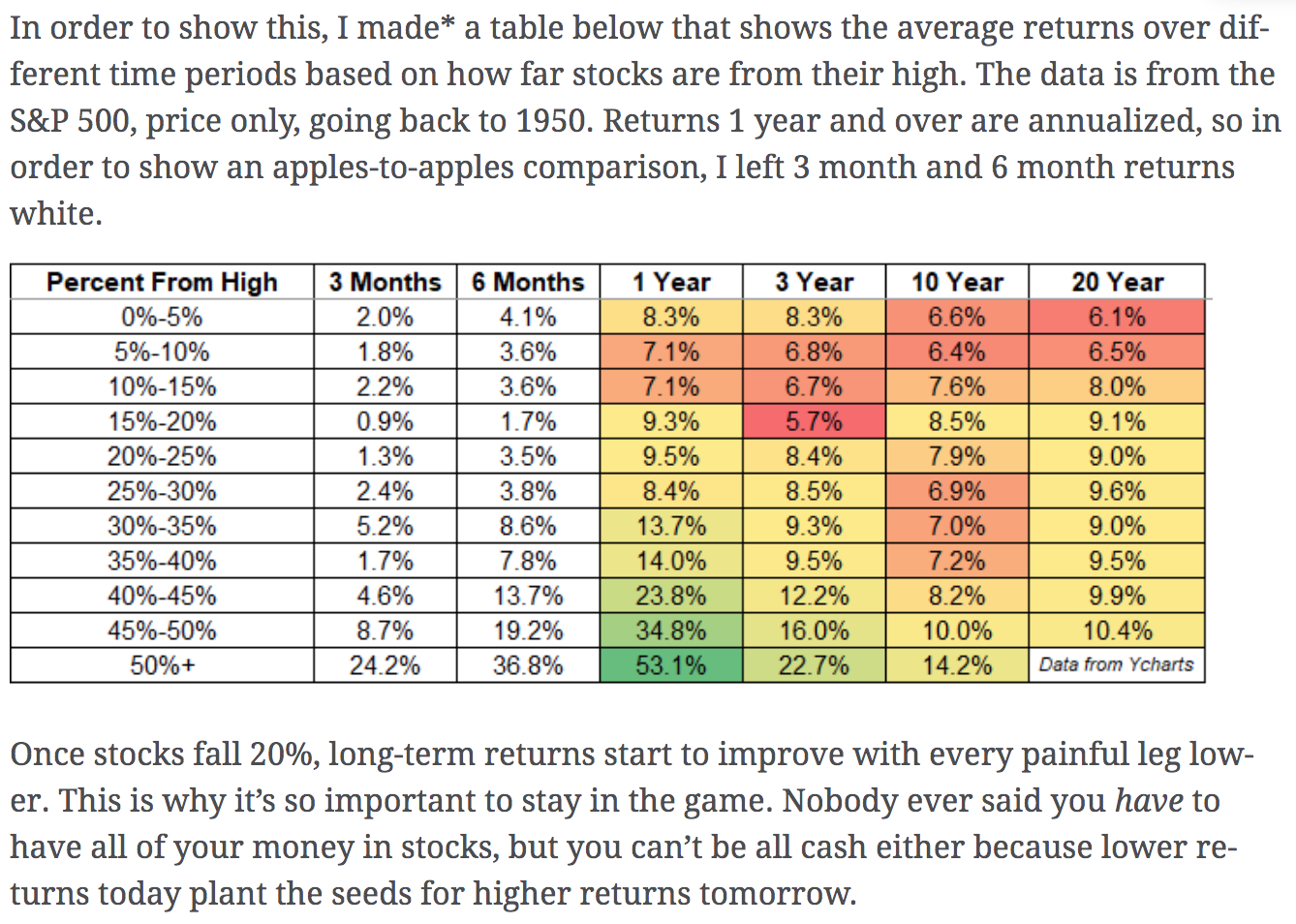 So if you have cash, you have time, you have a tolerance for risk when things feel bad, then start small, work lower, know that it is not likely to be different this time, but it is always darkest before the dawn.

I will add one other point though, that is different this time, as I consider the economic impact (I AM NOT an ECONOMIST) of the virus and the attempts to mitigate its spread, I am hard-pressed not to consider the fact that the negative wealth effect of stocks declining usually comes far later in a correction/recession cycle, this time we saw 30% of most people’s equity portfolio gone in a month. For those forecasting a short but deep recession, I suspect the timing of a stock market recovery might have more to do with it this time around.