I used to write daily running commentary on this site. I stopped after the 2016 presidential election. As the kids say, I just can’t anymore. Since then, I infrequently Tweet, I am not on Facebook or Instagram, and frankly have few cares about what most people have to say about most things aside from my family and close friends, and usually just about issues and causes near and dear to me and mine.

If you are reading this it’s not because I am your hedge fund manager, investment advisor or stockbroker and you are breathless with anticipation to hear the risk mitigation strategies I have taken to safeguard your capital because I have miraculously foreseen this Hydra-like crisis coming. I am not, and I did not. Nobody did, not for this reason. While most market commentators like to sound confident and smart, with a dash of wit, while trying not to offend, I’ll just give it to you straight.

To state the obvious, things just got real. What started for trump as a political hoax by his domestic enemies and the press, morphed into a conspiracy riddled  “foreign virus”, has turned into a wrecking ball for our health and safety, our democratic freedoms, our free-market economy, and our financial markets. But because of the state of denial in the White House for over a month until last week’s turn, we are now in a full-blown political crisis in our country, a crisis in leadership, both here and abroad, that will have to be the last battle fought once our citizens are out of risk of contagion, financial markets are less volatile and the economic aftershocks diminish.

So we have three crises, 1) health/humanitarian, 2) Economic / Financial Markets Crash and 3) Political…

Let me quickly address all three.

For those of you who watch me on CNBC, I have been consistent on this virus, I have nothing to offer of any use on the health and humanitarian crisis, we can leave that the experts, you know the geniuses that trump still keeps within inches of him at podiums, shaking their hands, contradicting them at every turn of the page while his teleprompter is updating. But I can tell you that I likely feel very similar to those of you who don’t get their news from Fox, I am worried for my family’s safety, worried that we are going to be in a period of discomfort for some time, and when things get back to normal we will have to take care of many around us who will take longer to bounce back,

Despite having to opine frequently on monetary policy by our Federal Reserve, I am not an economist, and can only consider their actions through the lens of the stock market, which I have spent the last 25 years staring at Bloomberg screens trying to decode, with bouts of success and plenty of failures. For the time being, I have little faith that the monetary response ALONE, which has included two surprise emergency rate cuts of 50 basis points a week and a half ago, last week’s repo actions to the tune of $1.5 trillion and last night’s 100 bps cut coupled with $700 billion of QE will put a bottom in the crash we are seeing in global financial markets.

Which leaves us in Congress’s hands to fill the gap of investor confidence with a massive fiscal package which includes flooding the system with cash, from the most vulnerable in our society who lack health-care, savings etc to small businesses that run on razor-thin margins to large companies who will be forced to layoff tens if not hundreds of thousands of middle-class workers. I suspect the recession will be deeper and take longer for us to come out of than most think.

Onto the stock market… trump signs a chart of the Dow Joans Friday and sends to Lou Freaking Dobbs of Fox Business after declaring a national emergency and seeing an epic short squeeze. This is NOT helpful for the stock market psyche from the guy who bankrupted six companies over the last thirty years. We are set to give most if not all of the gains back on the opening this morning. 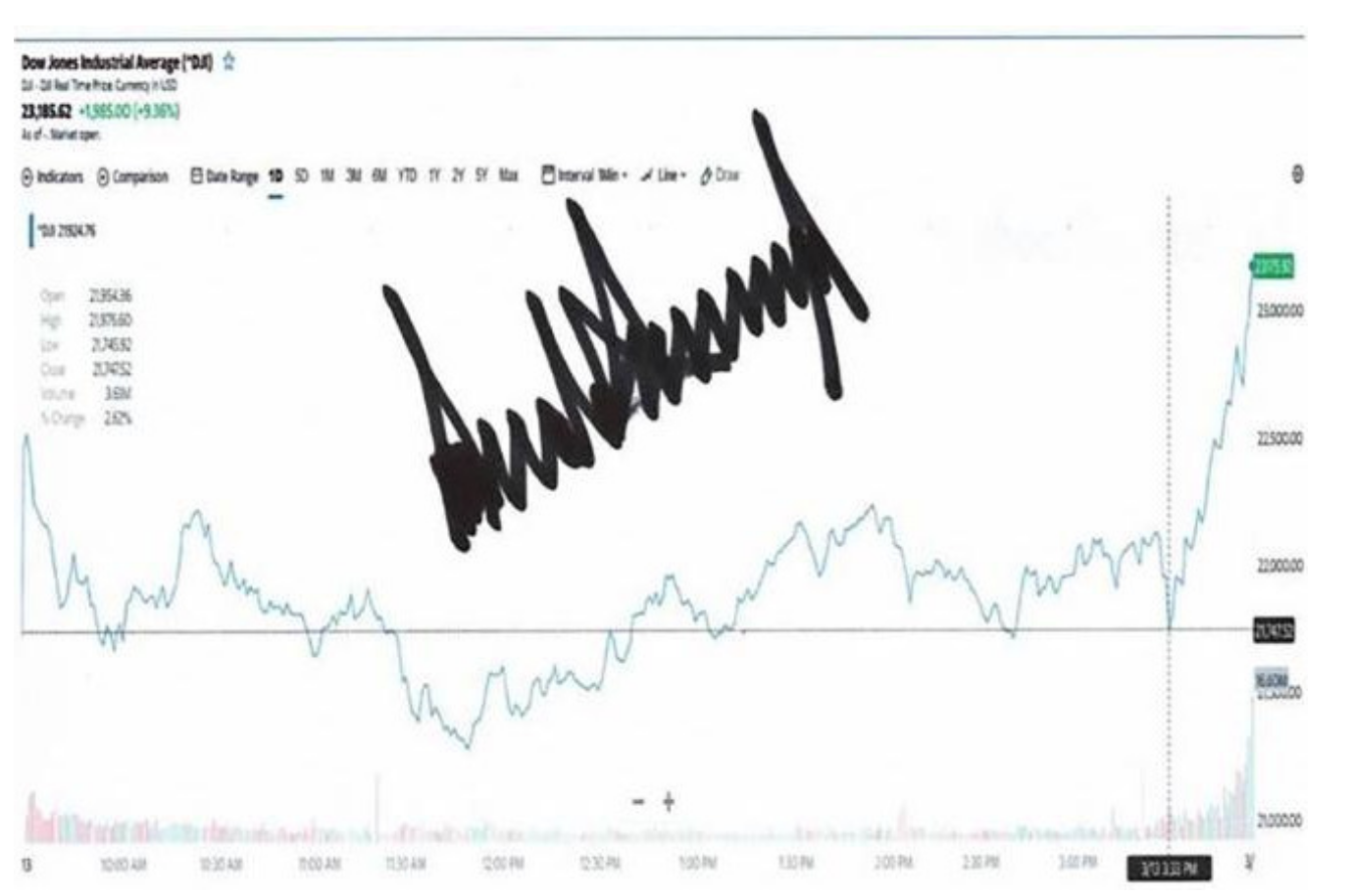 trump is learning the VERY hard way that there are no victory laps in the stock market, it doesn’t care who you are, or what you think you have control over.

trump wanted lower interest rates, well he got them, despite our Fed Chair, who he appointed, knowing in 2018 the best bet was to raise rates them in good times so we had some dry powder to lower them in the face of an unforeseen economic shock. Well, he got his cut to zero and the stock market is crashing as investors see little left in the monetary stimulus tank for the time being.

trump wanted lower oil, well he got it, to the tune of an epic crash that has only exacerbated the tightening of financial conditions as it has weighed on the credit markets, which is likely the next shoe to drop.

I can’t help but remember Jim Cramer epic rant on CNBC in August 2007 about financial conditions in the U.S., a whole year before things got “crashy” during the financial crisis… watch it, and tell me it does not apply to this very moment, trump “KNOWS NOTHING… and has no idea how bad it is out there”:

trump needs to stand down on the stock market, work with the health experts, our allies and demonstrate confidence in our response to the coronavirus crisis, work with Mnuchin, Pelosi, McConnell to get the fiscal response done, and in a big way. Only then when he demonstrates sound, non-bipartisan leadership will his political crisis abate.

As for the stock market, I have offered my views on S&P 500 (here), Nasdaq (here) and Interest Rates (here) signaling that there has been some unsustainable price action.

So where do we go from here? The next stop is near the Dec 2018 low around 2350 in the SPX (yellow line), followed by what it’s likely a total roundtrip of the move in the index from the day of trump’s election Nov 9th, 2016 (red line) as the mark of the total and complete repudiation of his economic policies which have only exacerbated the decline, the 2018 tax cuts, subsequent massive deficits, the global trade war he started in 2018, and his incessant pressure on the “independent” Federal Reserve. 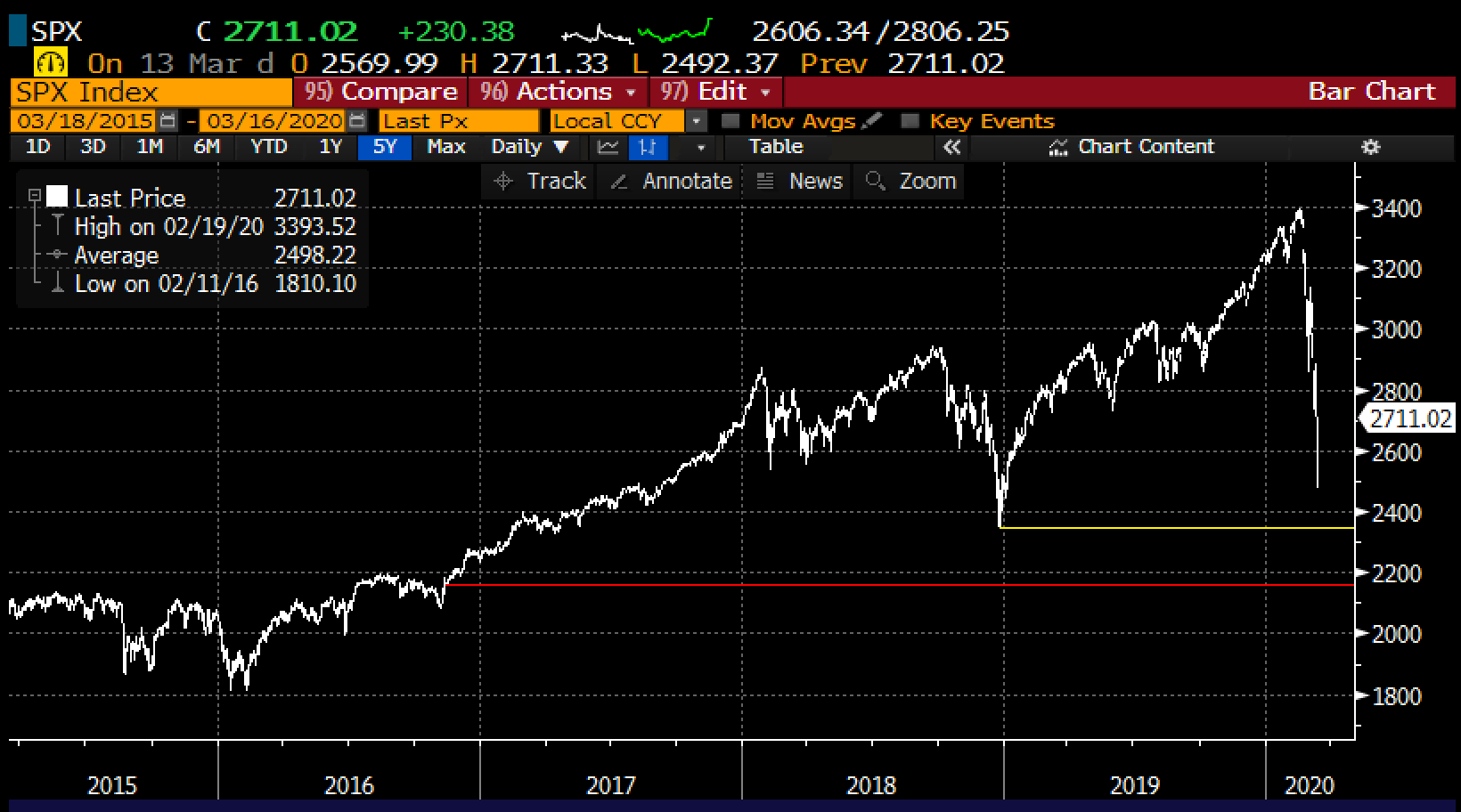 If you are trying to figure out where that truly long-term support is in the SPX you will have to go back to the last two times that we had recessions 2007-2009 and in 2001, in both instances, the SPX topped out near 1600 and in both instances, the SPX saw peak to trough drawdowns of 50% plus. If the SPX were to drop 50% from the recent highs just below 3400 it would take you back towards the double top:

I am sorry I can’t be a bit more optimistic about the stock market and the economy, that won’t come until we have more clarity on the path of the coronavirus… with the economy locked down, I can’t really see the stock market finding a bottom in the very near term. We will get through this, hopefully the loss of life will be minimal, but the economic and political blowback will be around for months, if not years. We need to buckle-up for what will be a tough slog no matter how quickly the stock market recovers the fiscal stimulus will need to come in waves for time to come to keep this ship afloat.