With a market decline like we have had, especially in such a short period of time, I think it makes sense to start putting together a shopping list that might soon make its way into a cart ready for purchase. That doesn’t mean buying blindly just based on price dislocation, but starting to consider what the drivers could be for a bottom and what the longer-term prospects look like, I am going to try to introduce some ideas on single stock names and offer up some of the inputs I might focus on that could cause me to pull the trigger as the markets attempt to find a bottom.

I often get asked what are the most important inputs I use to come up with trade ideas, and the answer often differs depending on the market environment we are in. In a raging bull market, it might start with stocks of company’s with the most momentum, in a bear market it might stocks what show great relative strength, but usually, it is a combination of sentiment, catalysts, valuation, and technicals.

As I am looking around now for ideas, surveying the recent damage, what was a raging bull market a month ago, and now a bear market, it is easy to identify stocks that have been unduly punished given their lack of exposure to specific issues, but the ones that might feel the most attractive are those who have direct exposure to the current issues causing the market volatility and have been absolutely murdered, in the current case travel-related stocks, or energy stocks.

The travel situation is interesting, as cancelations due to restrictions and fear of spread are non-stop, this week I have canceled three trips for the coming months which include flights and airfare, but would have included multiple Lyft rides, rental cars, and meals at restaurants. That is lost business, but it will come back. But for industry’s like Airlines, Hotel and Cruise that are very capital intensive the length and depth of the travel recession will determine their ability to stay afloat. Most institutional investors who want to make a contrarian play in these spaces would likely look at the debt before equity if considering worst-case scenarios.

But one part of the travel-related business that has also been punished but far less capital intensive, with a solid better balance sheet and higher margins is the travel booking space, like Expedia (EXPE). Shares of EXPE have been murdered, down 43% on the year, down 56% from its 52-week highs last year, and down 61% from its all-time highs made in 2017. The simple fact though looking at the seven-year chart below is that before the Coronavirus hit the global economy the stock was already weakening with a massive 27% drop in early Nov on an earnings miss. The long-term chart was an epic head and shoulders top with the neckline at $92: 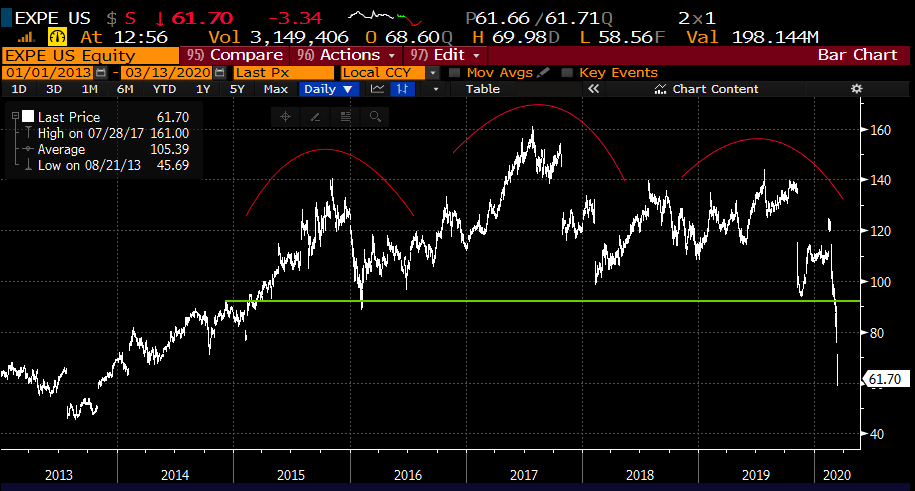 If the stock were to go below $60, the next real level of technical support is in the mid $40s, ugh. So despite the crush, it is really in no man’s land from a technical perspective.

Valuation, despite looking dirt cheap on a P/E basis at less than 9x expected 2020 eps, I would say is also in no man’s land because no man knows what they E will be… right now expected to be up 13% yoy to a new high, that ain’t happening no matter how quickly the virus abates.

So if the expected $7ish a share this year is actually $3.50, then you can do the simple math, the stock will be trading at about 17x which over the last 5 years has been cheap: 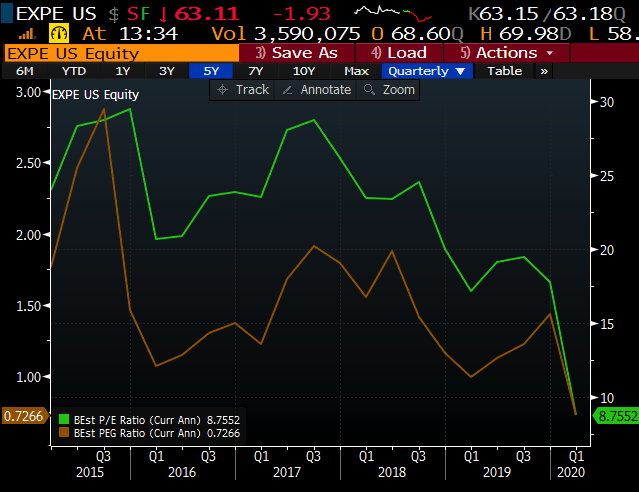 As for the balance sheet, with a market cap of less than $9 billion, and n e debt of less than $2 billion its ok, with an ev sales of about which is well below its 5-yer peak at 3x… the $12 billion enterprise value though could make the company an attractive take-out candidate.

But here is the thing, the news flow will get worse before it gets better and as I said before there are a lot of inputs to this story that are very unclear and I am not sure we have seen capitulation yet.

If you were looking to define your risk, it is worth noting that implied volatility, the price of options is at multi-year highs, making long premium directional trades nearly impossible, meaning you could get the direction right but the trade structure wrong.