Yesterday in my In The Money series with Fidelity Investments, we discussed the market’s continued volatility, the expectation of Fiscal Stimulus to be combined with last week’s monetary stimulus in the form of the U.S. Federal Reserve’s “surprise emergency” interest rate cut to combat the compounding negative economic effects of the spreading of the coronavirus. I also detailed an options strategy in Disney (DIS) for those looking to leg into bullish exposure (with defined risk) in high-quality stocks that have been hit hard on business disruption due to the virus. I also discussed an options trading strategy that makes sense for buy and hold investors in an effort to add yield to a defensive stock AT&T (T), which is primarily domestic-focused, has a product that is viewed as a utility, and pays a high dividend yield that could cause the stock to show relative strength to the broad market in this period of downward volatility. Click below to watch:

Disney is down more than 30% from its 2019 all-time highs on fears that its parks will be closed and consumers will not go to movie theaters to see some key summer releases. I can’t tell you that DIS will not go down much below $100 where it found support in late 2018, but a call calendar allows for a defined risk way to play for the stock to be re-testing that key support level by the fall.

Given the volatility since we shot this video I am going to adjust the prices from the video:

Break-even on April expiration:
Profits above $124.50, but ideally want the stock to be 120 or slightly lower on Apr expiration, have short April call expire worthless and own the long-dated Oct 120 call.

$120 served as massive technical resistance from its highs in mid-2015 to its breakout in April 2019 when the company introduced its Disney + streaming service. 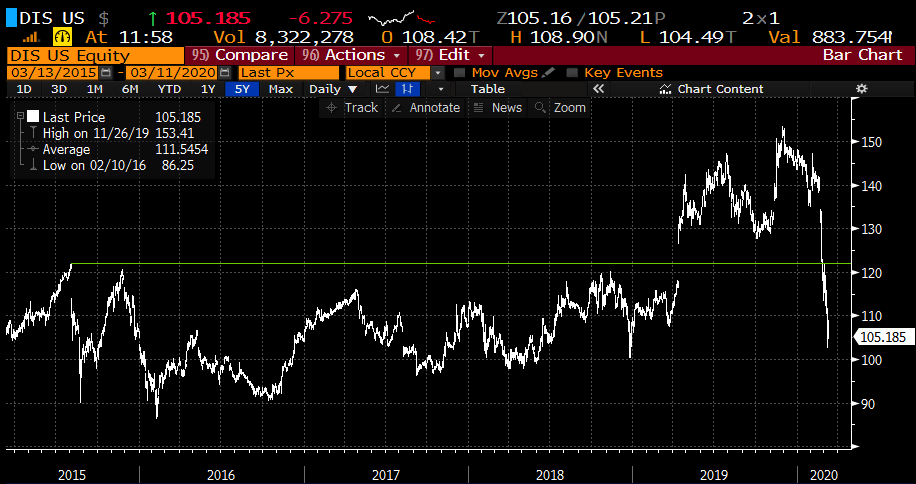 AT&T’s domestic focus, product viewed as a staple and 6% dividend could cause the stock to outperform the broad market… looking for strategies for the stock to appreciate from here, but also take advantage of high levels of implied volatility (the price of options) given the macro environment makes sense.

Given the volatility since we shot this video I am going to adjust the prices from the video:

Profits of the stock up to 38, up 9.5% in a month. If the stock is below 38 then the 50 cents received for the call sale will act as 1.4% added yield, annualized that would be 17%. If the stock is 338 or higher the stock would be called away, but effectively at 38.50 (the short call strike plus the premium received). The stockholder could always cover the short call if the stock was above 38 prior to Apr expiration to keep the long position in place.

Losses of the stock below 34.20, the current price less the 50 cents in premium received,

The 38 strike was chosen given the technical resistance between 38 and 39: 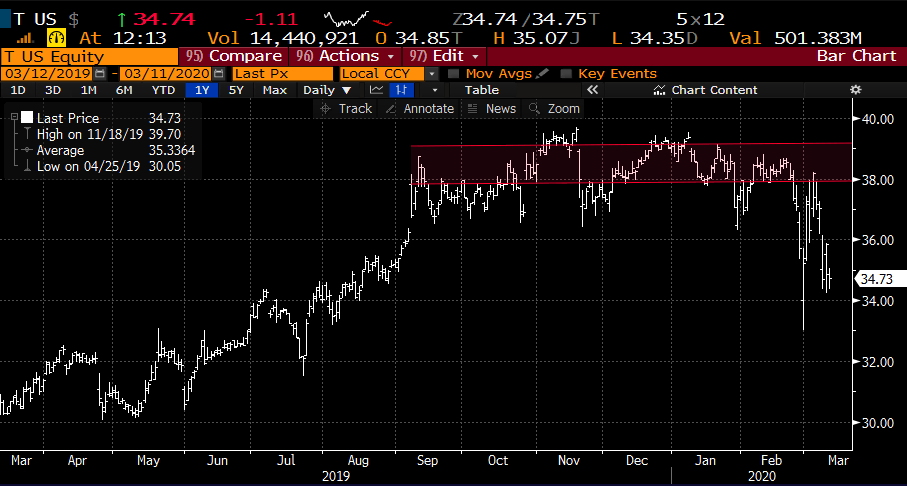 The one year chart of 30-day at the money implied volatility at 48% is at a 10yr high, making sales of options far more attractive than purchases, especially for existing long holders or those looking to add defensive stocks to their portfolios:

Trade Update: On last week’s show I detailed a bearish strategy in the XLK, the Technolgy Select etf, where Apple (AAPL) and Microsoft (MSFT) make up 40% of the ETF’s weight:

I suspect that mega-cap tech stocks that make up most of the weight of the XLK will test Friday’s lows prior to Q1 earnings season. Apple and Microsoft have already withdrawn their earnings guidance that they gave for the current period, and given the uncertainty about the spread of the coronavirus I suspect we will continue to see companies, and consumers act in conservative ways until the coast is clear. This means that visibility will remain poor for companies forecasting their businesses and it makes sense that some of the valuation premiums that stock’s like MSFT and AAPL got in the last year or so should be discounted. Also, investor concentration and the massive outperformance in these names could cause them to be used as a sort of “source of funds”.

With the XLK at $85, this put spread is worth about $5, or double of what it cost when the XLK was $92.50. On Monday morning when XLK was 82 this put spread was worth nearly $10. If XLK is down there again it makes sense to take the profit near the short strike of the spread. For those unsure in the middle of this spread, with a double, it might make sense to take off half of the position and play with the house’s money.