Crude Oil had been declining for a whole host of reasons into the weekend, but crashed overnight, trading down at its lows 30%, now down 16.5% as I write $7 off of its lows: 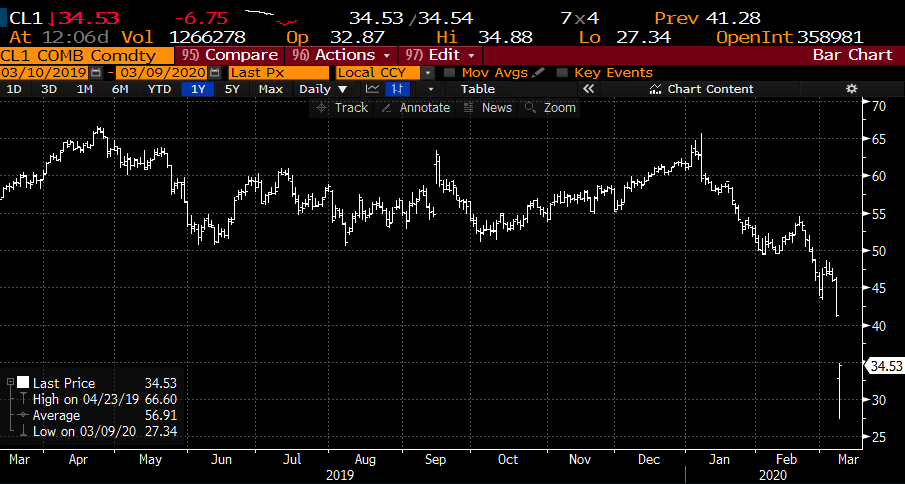 Why? Crude Prices Collapse After Saudi Pledge to Boost Output per WSJ:

a clash between oil giants Saudi Arabia and Russia threatened to flood a world already hobbled by the coronavirus outbreak with a glut of crude.

Saudi Arabian state oil giant Aramco’s move over the weekend to cut most of its official selling prices triggered the oil-price crash, with a barrel of Brent crude down 22% at $35.49 on Monday. Saudi officials said the kingdom also plans to boost crude output.

An “oil price war unequivocally started this weekend” said Damien Courvalin, head of energy research at Goldman Sachs, noting the price cuts were Saudi Arabia’s biggest according to some measures in at least 20 years.

For those looking to be a tad contrarian, and Russia and Saudi Arabia might come to their senses, and thinking that large integrated oil companies with good balance sheets like Exxon (XOM) and Chevron (CVX) have gotten thrown out the baby with the bathwater… it makes sense to look at the Energy Select etf (XLE) where those two make up 45% of the weight of the XLE:

The XLE gapped this morning below its 2009 low, which some technicians might have viewed as an important psychological support level, which could now become resistance: 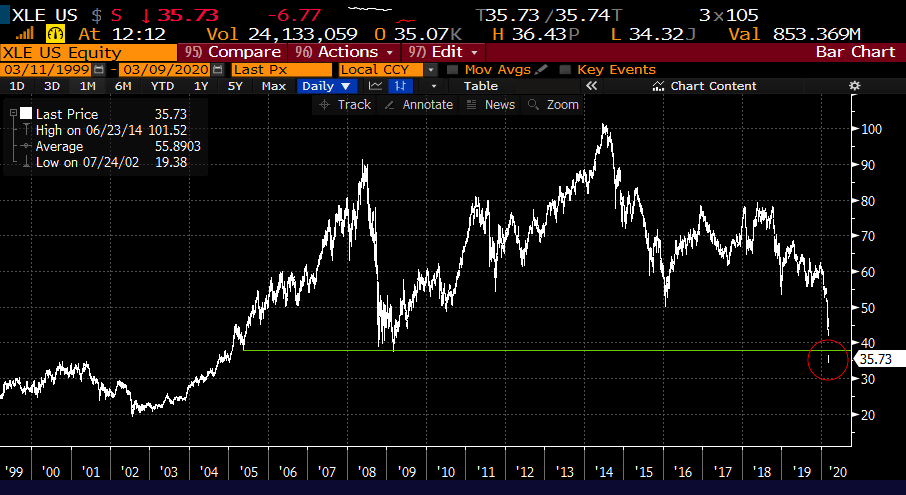 Here is the problem with being contrarian in the sector that is blowing up, even doing so with defined risk, options prices in the space of blown out to levels that make it very hard to make long premium directional bets as short-dated options prices (30-day at the money implied volatility) has nearly doubled the highs dating back to 2010:

One strategy that makes sense though is a call calendar, selling short-dated out of the money calls and using the proceeds to help finance longer-dated calls, and I might consider that $40 breakdown level as a level to lean on…

If the XLE is below 40.21 on April expiration then the short strike will expire worthless. The ideal scenario is that the ETF is near or just below 40.21 and can either be covered for a small amount and the long Dec 31st 40 call has appreciated an the cost of it has been reduced by half. At that point depending on where the ETF the Dec can be turned into a calendar again further reducing the premium at risk or turn into a vertical call spread by selling a higher strike call in Dec 31st expiration.

The max risk of this trade idea is $1.80 and would be at risk on a large move above the 40 strike or below current levels.

This is clearly a contrarian view and not one I would express in being merely long the XLE or its components, but it sets up as attractive options trade if you think large integrated oil stocks are currently capitulating and trying to find a bottom. This trade idea risks only 5% of the ETF price and ETF that is down 17% as I write.