On Tuesday in my In The Money series with Fidelity Investments, we discussed the market’s continued volatility, the U.S. Federal Reserve’s “surprise emergency” interest rate cut to combat the compounding negative economic effects of the spreading of the coronavirus. I also detailed an options strategy in the S&P Technology Select ETF (XLK) where Microsoft and Apple make-up 40% of its weight and discussed a defined risk way to play for a bounce over the next few months in Jetblue, whose stock has declined nearly 30% in the last month. Click below to watch: 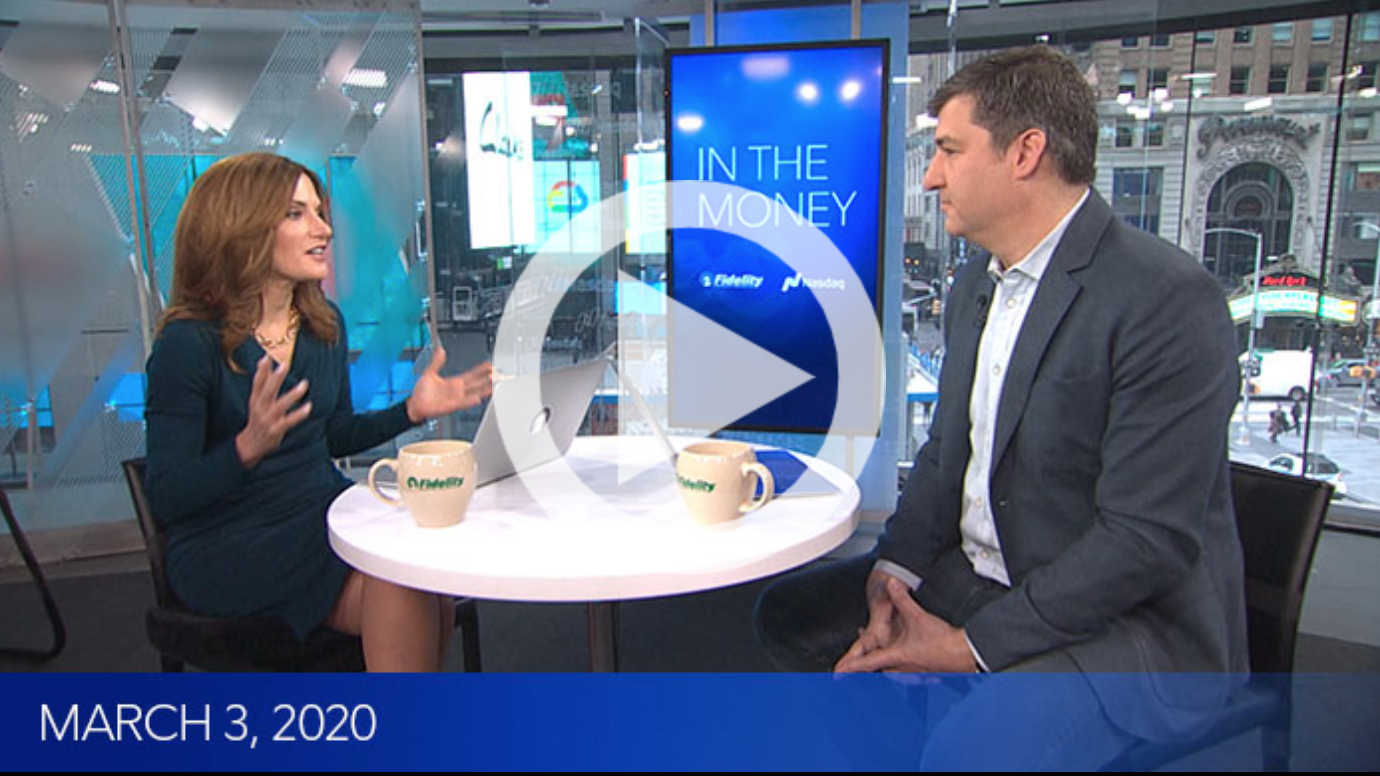 I suspect that mega-cap tech stocks that make up most of the weight of the XLK will test Friday’s lows prior to Q1 earnings season. Apple and Microsoft have already withdrawn their earnings guidance that they gave for the current period, and given the uncertainty about the spread of the coronavirus I suspect we will continue to see companies, and consumers act in conservative ways until the coast is clear. This means that visibility will remain poor for companies forecasting their businesses and it makes sense that some of the valuation premiums that stock’s like MSFT and AAPL got in the last year or so should be discounted. Also, investor concentration and the massive outperformance in these names could cause them to be used as a sort of “source of funds”.

On Friday the XLK bounced at its 200-day moving average, also the uptrend from the June 2019 lows, this is the level I would play for on a re-test:

Shares of Jetblue have gotten destroyed as fears of the spreading of the coronavirus have caused travel restrictions by many governments and resulted in many cancellations of routes by airlines. This has mostly been an issue for U.S. carriers like United, Delta and American that rely on international routes for a good bit of their profitability, by domestic carriers like JBLU have been absolutely destroyed of late as investors fear U.S. travel will also slow down. 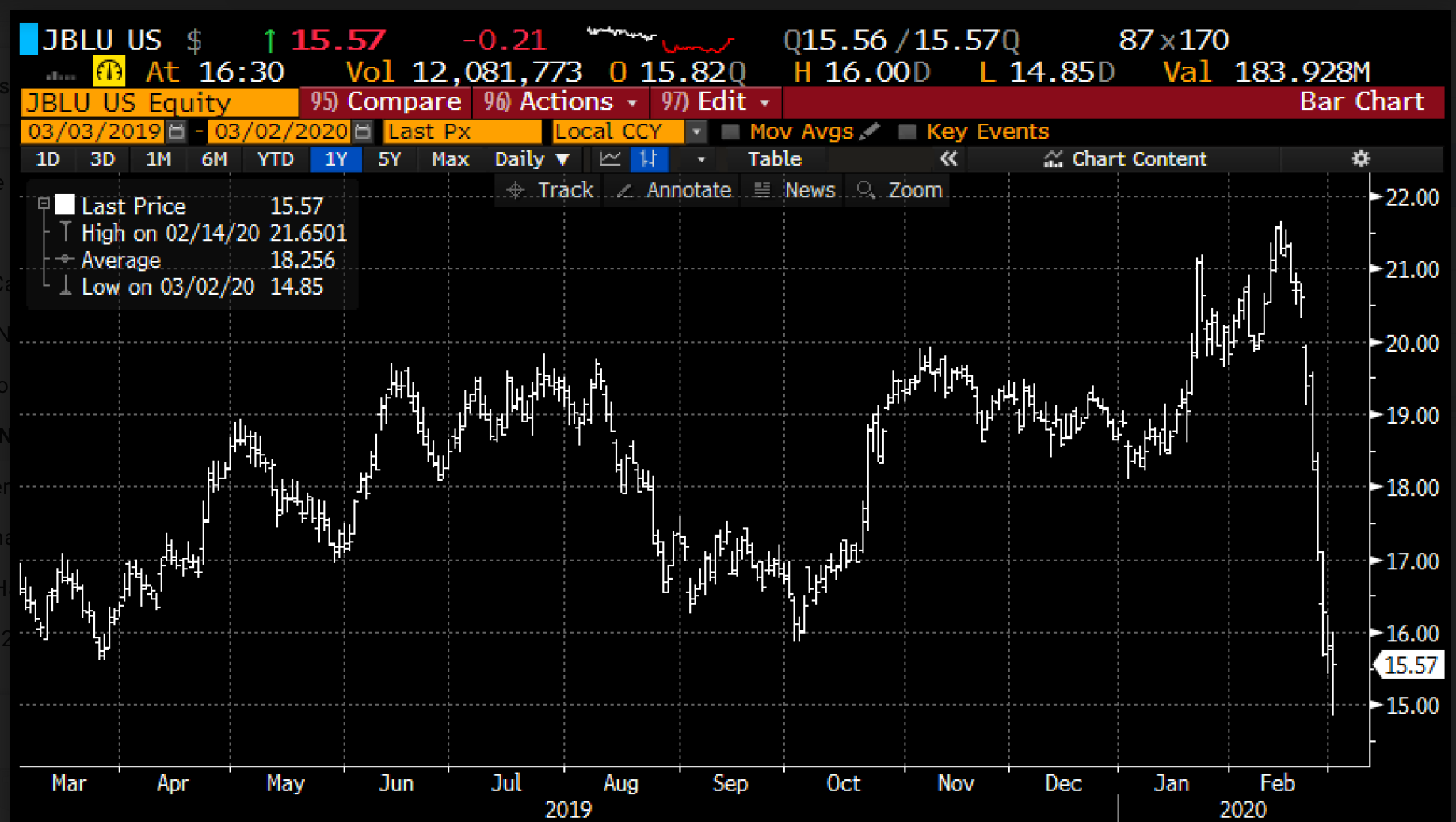 The five-year chart below shows good support near $15: 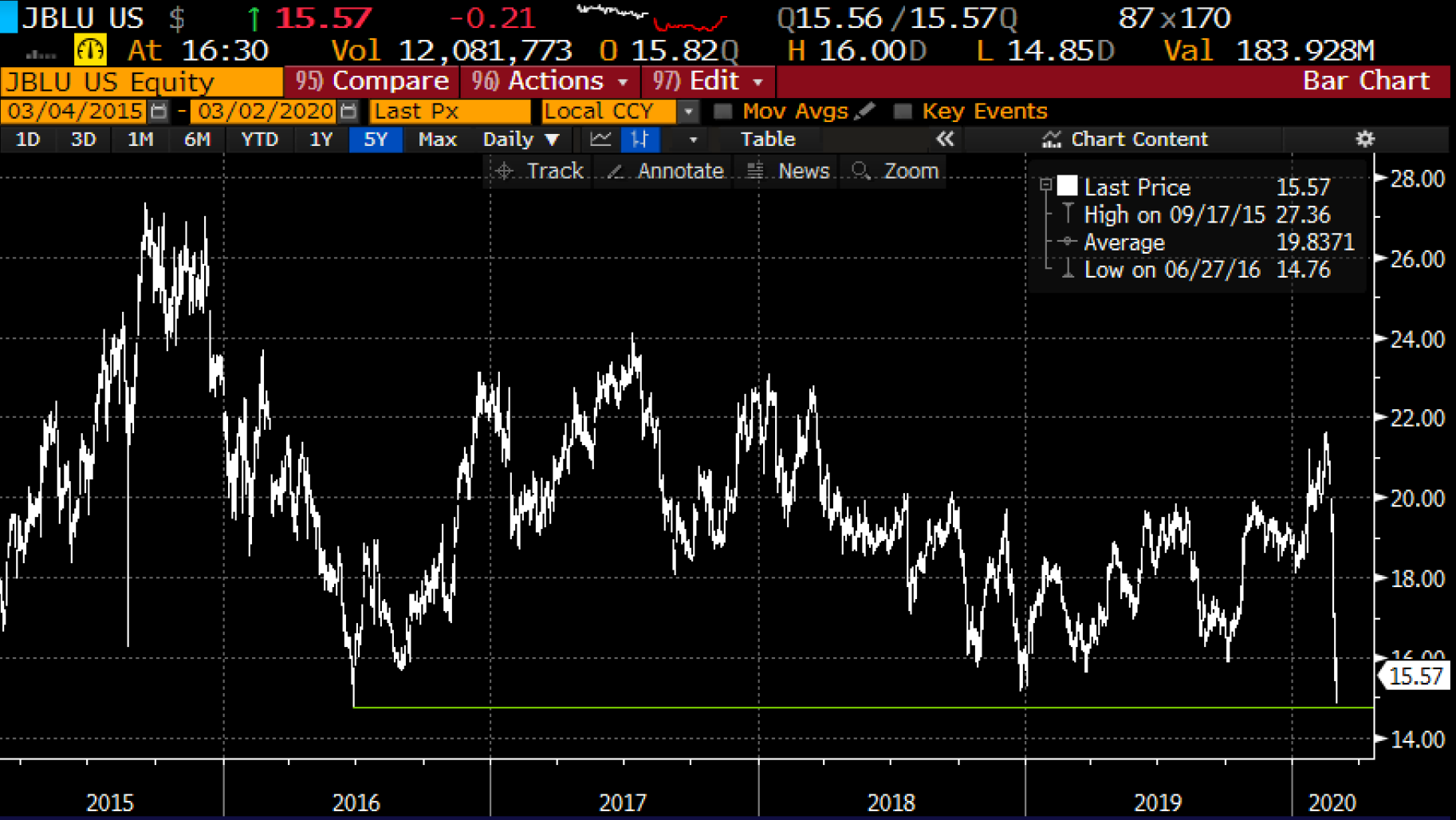 If you are of the belief that the U.S. will deal with the spread of the virus better than other nations have so far, and that our consumer will come roaring back in late Spring, then looking at domestically focused names like JBLU could be a great way to take advantage of the recent downward volatility. But given the uncertainty, it makes sense to define one’s risk:

We also discussed the long-term uptrend in the S&P 500 (SPX) from the 2009 financial crisis lows, and it makes sense to consider how far a market decline might go if things were to get worse before they got better relating to the uncertainties of the virus and its adverse economic impact. 2855 was Friday morning’s low, but 2500, down about 10% from there would be the next big support level: 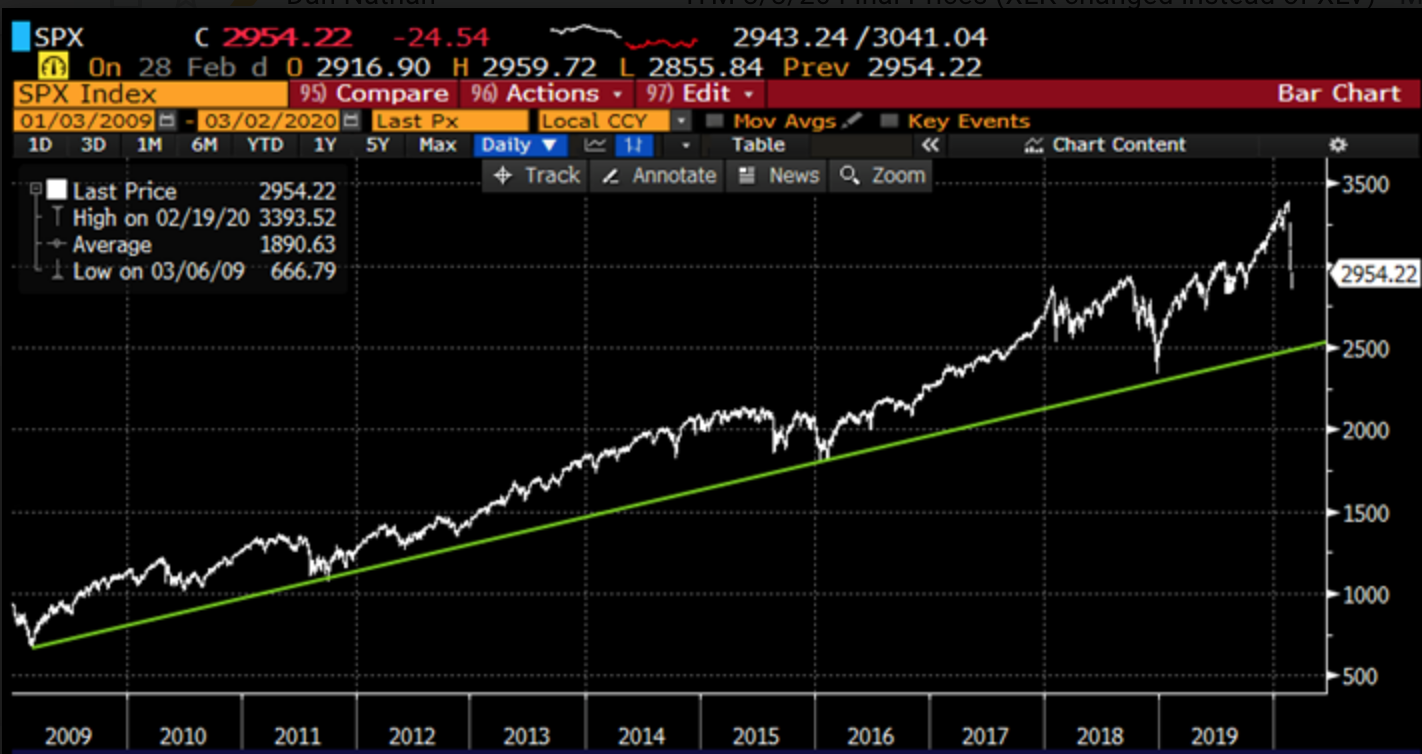 Also, I have not shut up about my bearish view on U.S. treasury yields. Yesterday they finally broke the psychologically important 1% level and the breakdown level at 1.31% should serve as important technical resistance. If rates were to get above there (and stay there), despite the Fed’s insistence on lowering Fed Funds, it might be viewed as a sign of economic stability, and send an all-clear for stocks: 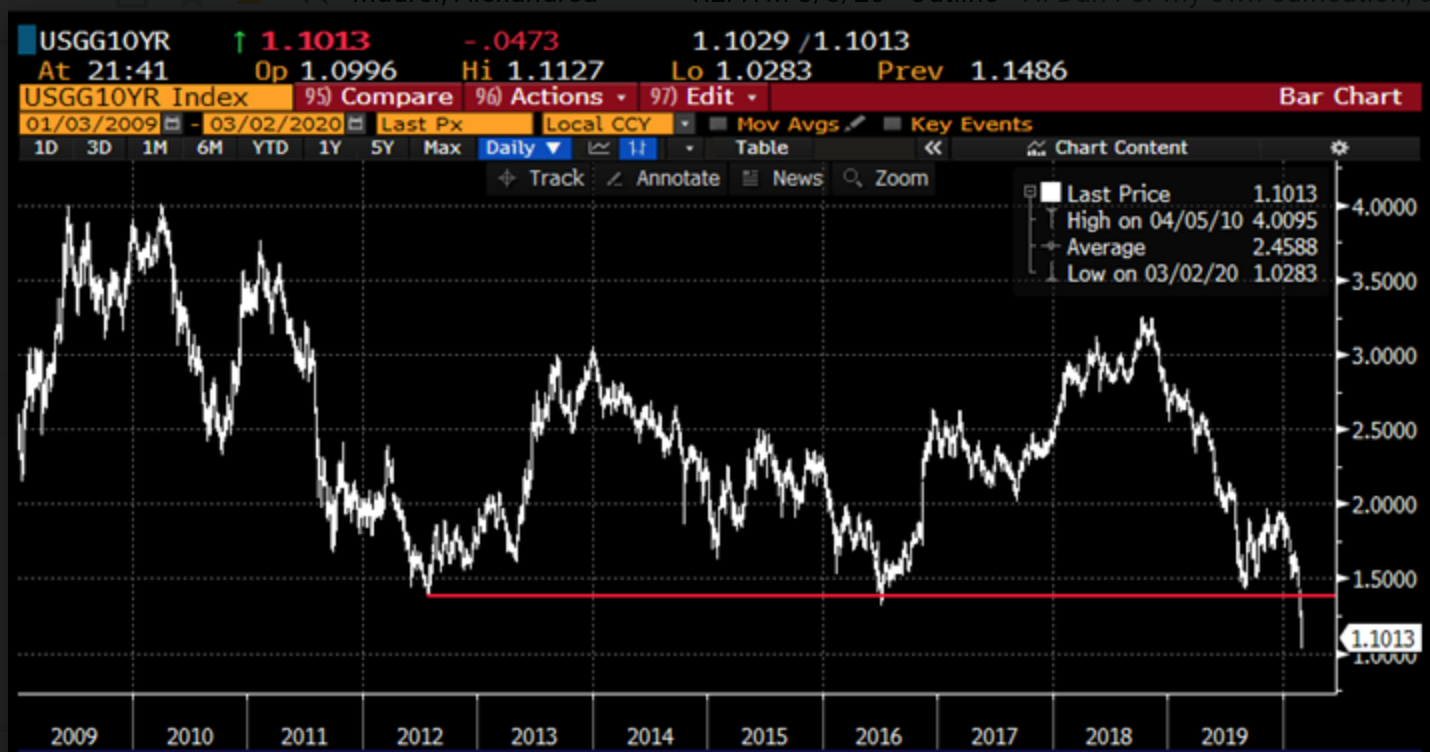