On January 29th, when Tesla (TSLA) was trading at a mere $577 prior to its Q4 earnings report, I previewed the quarter (read here) and concluded with the following regarding trading options in the name:

Just to demonstrate how challenged it is to make money long options into today’s print, and considering the $60 implied move if you were bearish and wanted to play for a move down $60 (with the stock at $576) you could buy the Jan 31st weekly 575 – 510 put spread, but that would cost you $23, your break-even would be at $552, down 4% with a max gain of $42, not even 2x the premium at risk down 10%. NOT a great risk-reward. Not even a good hedge for long holders. You need to get a lot of things right to only lose a little money by the week’s end, first and foremost direction, then the magnitude of the move and of course timing.

If I were long the stock and wanted to hedge, I might look at longer-dated put spreads, risking what you are willing to lose, but allowing for more time and a far wider range to the downside. For instance with the stock at $576, I might consider the June 550 – 350 put spread for about $55, breaks even down at 495 and mitigates losses of 145 down to 350, not protection below, BUT that is nearly 10% of the stock price for protection down 14%… also not a great hedge as the options market is only implying about a 25% chance the stock is $495 on June expiration.

You get the point, with premiums so elevated, you needed to be right in more ways than one to make money… the good thing for call buyers, and put sellers is that the stock’s ramp was so violent it made long punters feel like geniuses and anyone with a cautious stance look like an idiot.

What’s fascinating about how the stock has traded since earnings are NOT the 10% gap higher the day after the results, after the stock was already up 45% on the year, but three trading days later when the stock went parabolic from $650 to nearly $1000 on massive volume: 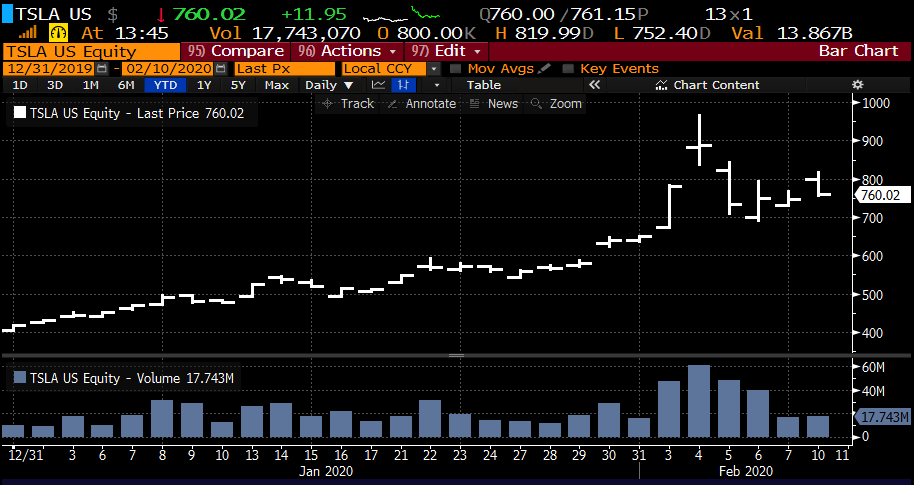 I’d love to tell you that the fever has broken, but until it is below $600, the prognosis remains volatile.

With the stock at $770, the at the money weekly (Feb 14th) straddle (the call premium + the put premium) is offered at $76, or about 10% of the stock price, or about $14.5 billion of the company’s enterprise value. As a reminder, the at the money straddle is essentially the implied movement in the stock via the options market over the period of time between now and the expiration date. The value of the straddle will be a constant battle between time decay and the movement in the stock, which can help to offset decay. If the stock were to close this Friday at $770 both the call and put of that strike that equal a combined $76 today will be worthless.

Over the last five years, the stock had been about a 50 vol name in the options market, which for a $20 to $30 ish billion market cap stock was high, but given their liquidity issues and the industry they are in maybe this made sense. But for implied volatility to top 100% as the company’s market cap got above $100 billion, this is virtually unprecedented in the last decade since the financial crisis.

Once the fever breaks though, and this stock settles somewhere, I suspect premiums will settle in somewhere in the 60s.

Taking a look at the chart since 2014, the recent breakout level at $400 should serve as massive support for some time: 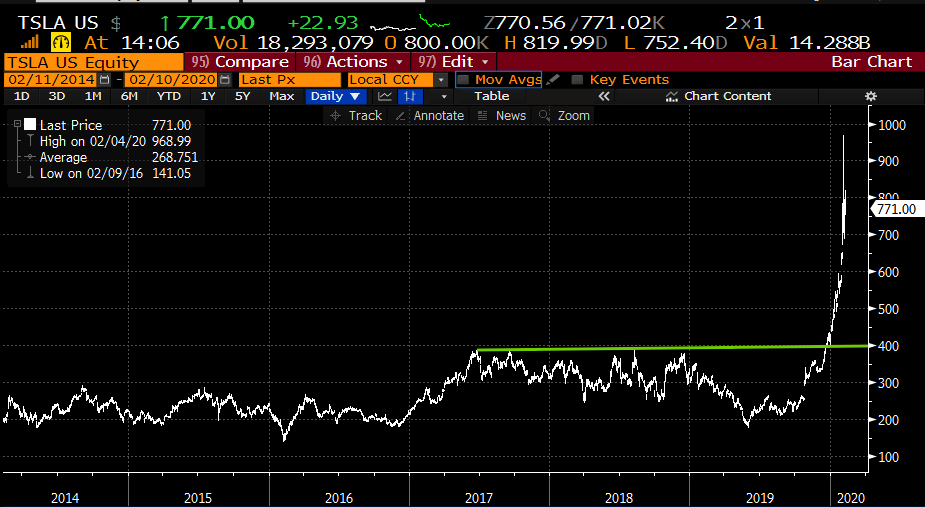 If you were looking to put a long place holder, or good till cancel order in at $400, selling the Jan 2021 400 put at $23, or about 3% of the stock price makes sense, if margin not a huge issue for you. The worst-case scenario would be the stock is below $400 on January expiration and you would be put 100 shares of stock per 1 contract sold and suffer losses below. But really you are long at the short strike, less the $23 premium received, so down at $377, or down nearly 50% from current levels. But it is worth noting that the 52-week low in the stock is $177 last June.