Wynn Resorts (WYNN) will report its Q4 results today after the close. The options market is implying about a $7.25, or about 6% one day move tomorrow, which is double the average of almost 3% over the last four quarters. As one might expect, short-dated options prices are elevated into earnings, but given the company’s exposure to Macau, and the effects of, and the company’s response to the coronavirus, I might have expected implied volatility (the price of options) at or above 52-week highs:

Last night on CNBC’s Fast Money, my friend, and head strategist at OptionsPlay, Tony Zhang had a quick preview of how options are set up into the print:

The trade that Tony discussed, was one that he saw trade yesterday in the market, in good size where a trader sold the March 110 puts and used the proceeds to buy the March 150 calls… and did for a 5 cent debit. when the stock was near $132.

Regular readers know that we call this strategy a “risk reversal” where the trade will be profitable on expiration if the stock is above $150 with the worst-case scenario the stock is below the short put strike at $110 and the trader would be put the stock at that level and suffer losses below. On a mark, to market basis, the trader will have gains prior to March expiration as the stock gets closer to the long call strike, and losses as the stock get closer to the short put strike. It is also worth noting that given the fact that the stock is currently $18 or 18% from the long call strike and about 20% from the short put strike, the highest likelihood is that both options lose most of their value without a greater than expected move post earnings and the trade expires worthless. This trade is also likely taking advantage of the elevated levels of put prices to get long exposure, but also the put sale indicates they are willing to get long the stock down at $110.

As Guy said in the clip, this stock is really in no-man’s-land in the mid $130s, but we can see why this trader is positing for a breakout above technical resistance near the $150 double-top and support near the triple bottom just below $110: 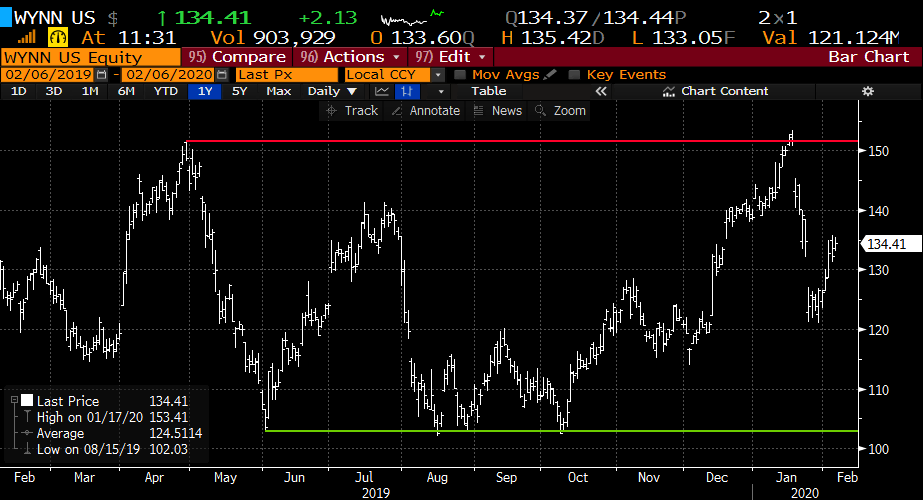 Taking a slightly longer-term view of the chart, the stock convincingly broke out of a wedge pattern late last year with a re-test of the downtrend this month, and a hold, barring a material uptick in coronavirus disruption, $110 should serve as staunch technical support in my opinion: 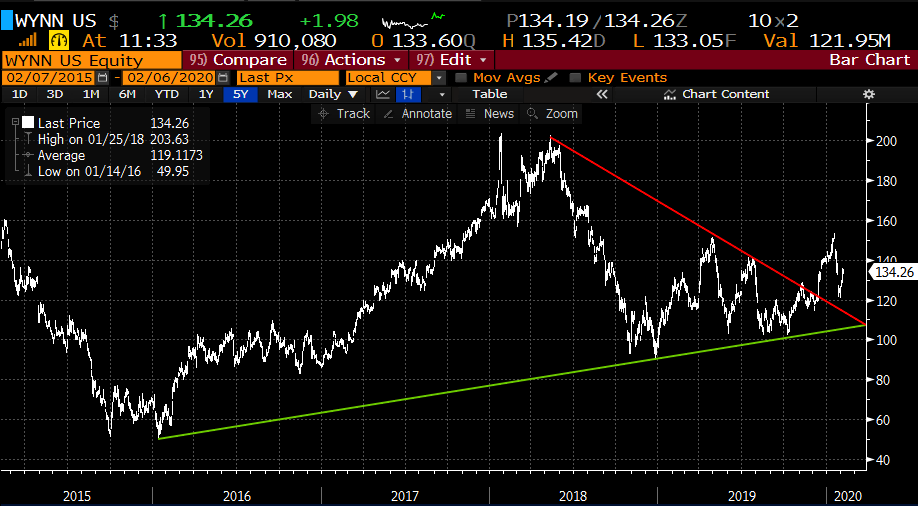 All that said, with casinos in Macau closed for the near future, and guidance clearly impacted, with little visibility, positioning for a re-test of $110 might make sense near-term.

If I were inlined to play for a move to support, with defined risk, I might consider the following put spread in March:

Rationale: this trade idea risks 3.75% of the stock price over the next six weeks, offers a break-even down 6.7%, a little more than the implied move, and profit potential of $15, or 11% of the stock price if the stock is down 18% on March expiration, which the options market suggests is about a 12% probability. To enter a bearish trade like this one would need to be convicted that a miss and guide down is NOT in investors’ expectations and disruptions from the coronavirus are going to get worse near-term before they get better.