Tesla (TSLA) will report its Q4 results today after the close. The options market is implying a nearly $60 move in either direction tomorrow, or about 10%, or about $10 billion in market capitalization. The 10% move is basically inline with its longterm average one-day post-earnings move, but the last two results have been particularly volatile with up 17% post Q3 and down 13% post Q2. 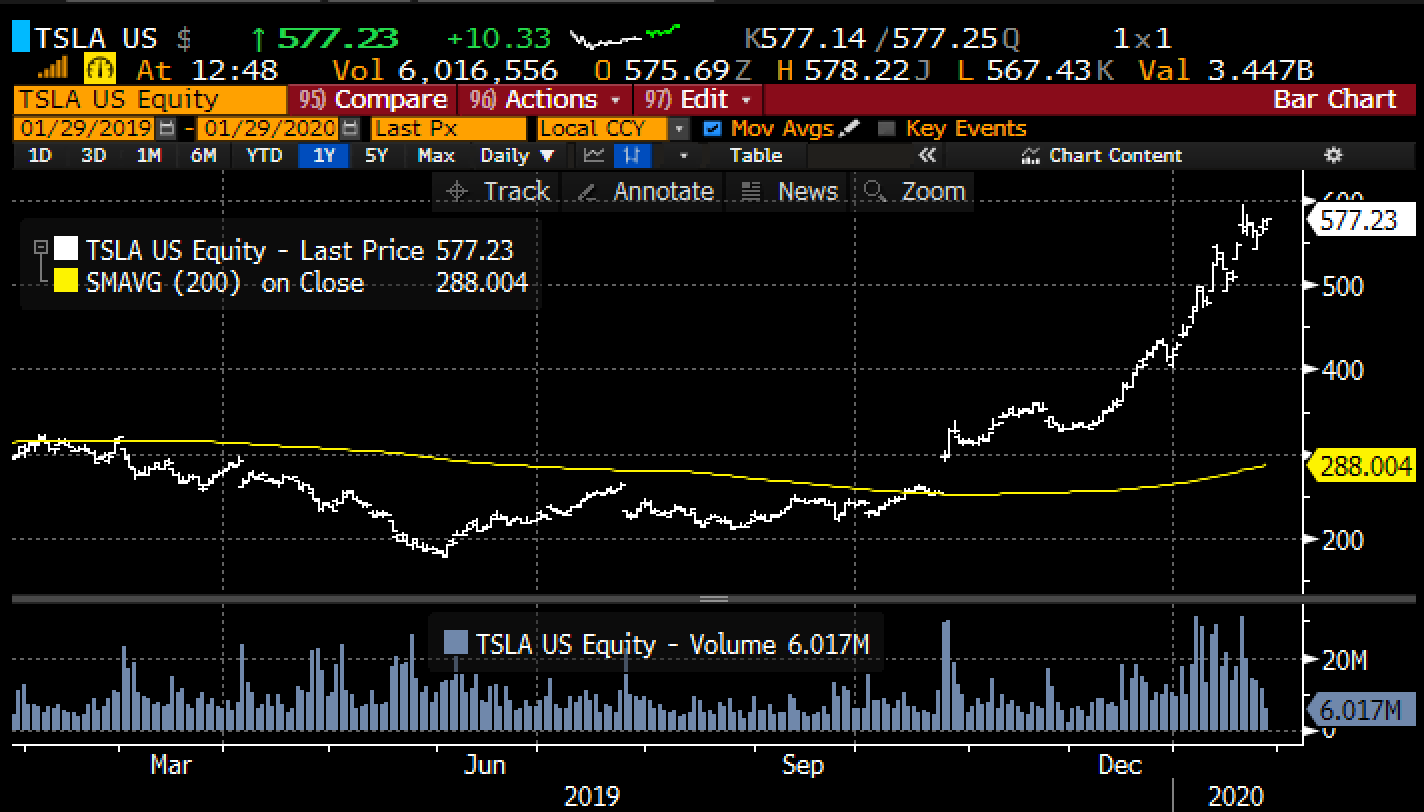 The stock’s move over the last 8 months is one of the biggest manias I can remember in the stock market in my nearly 25 years in the business.

I would also note that given the move of late, short interest in the stock remains in the high teens’ percentage of the float, and Wall Street analysts remain massively off-sides with only 9 Buy ratings, 17 Holds and 11 Sells with an average 12-month price target of $388.

Regular readers of Risk Reversal and viewers of CNBC’s Fast Money know I have not been a fan of this stock for months, and frankly, I don’t have a strong opinion at the moment aside from one simple rule I learned nearly 20 years ago, don’t try to call a top in a Mania, the stock has rallied a couple of hundred dollars above what most bulls might have expected in the last few months, there is no reason it could not double again…

Short-dated options prices are through the roof as one might expect, making near-term long premium directional trades difficult:

Just to demonstrate how challenged it is to make money long options into today’s print, and considering the $60 implied move if you were bearish and wanted to play for a move down $60 (with the stock at $576) you could buy the Jan 31st weekly 575 – 510 put spread, but that would cost you $23, your break-even would be at $552, down 4% with a max gain of $42, not even 2x the premium at risk down 10%. NOT a great risk-reward. Not even a good hedge for long holders. You need to get a lot of things right to only lose a little money by the week’s end, first and foremost direction, then the magnitude of the move and of course timing.

If I were long the stock and wanted to hedge, I might look at longer-dated put spreads, risking what you are willing to lose, but allowing for more time and a far wider range to the downside. For instance with the stock at $576, I might consider the June 550 – 350 put spread for about $55, breaks even down at 495 and mitigates losses of 145 down to 350, not protection below, BUT that is nearly 10% of the stock price for protection down 14%… also not a great hedge as the options market is only implying about a 25% chance the stock is $495 on June expiration.