So year to date, the two best performing sectors in the U.S. stock market (via etfs) are mega-cap Tech stocks, and Utilities… weird right?

That is a fairly unusual event. For some reason, investors are suggesting that high growth high valuation Tech stocks are as defensive as low growth high valuation Utilities stocks. That does not make much sense to me. Does this odd occurrence suggest that the U.S. stock market headed for a “disaster of biblical proportions”?

For the last couple weeks, I have kept an eye on the performance of the XLU, the etf that tracks the Utilities group, and its near straight line higher:

This could be explained by the relative yield differential of the group vs the drop in the U.S. treasuries. But I guess then it begs the question why would yields be going much lower if the Fed is in hold after last year’s supposed “mid-cycle” adjustment and most strategists and economists pointing to higher global growth in 2020 in the heals of the big phase one trade “deal” with China.

As for the XLK, nearly 40% of the etf is Apple (AAPL) and Microsoft (MSFT) and their YTD outperformance explains the gains in the S&P Technology Select etf. 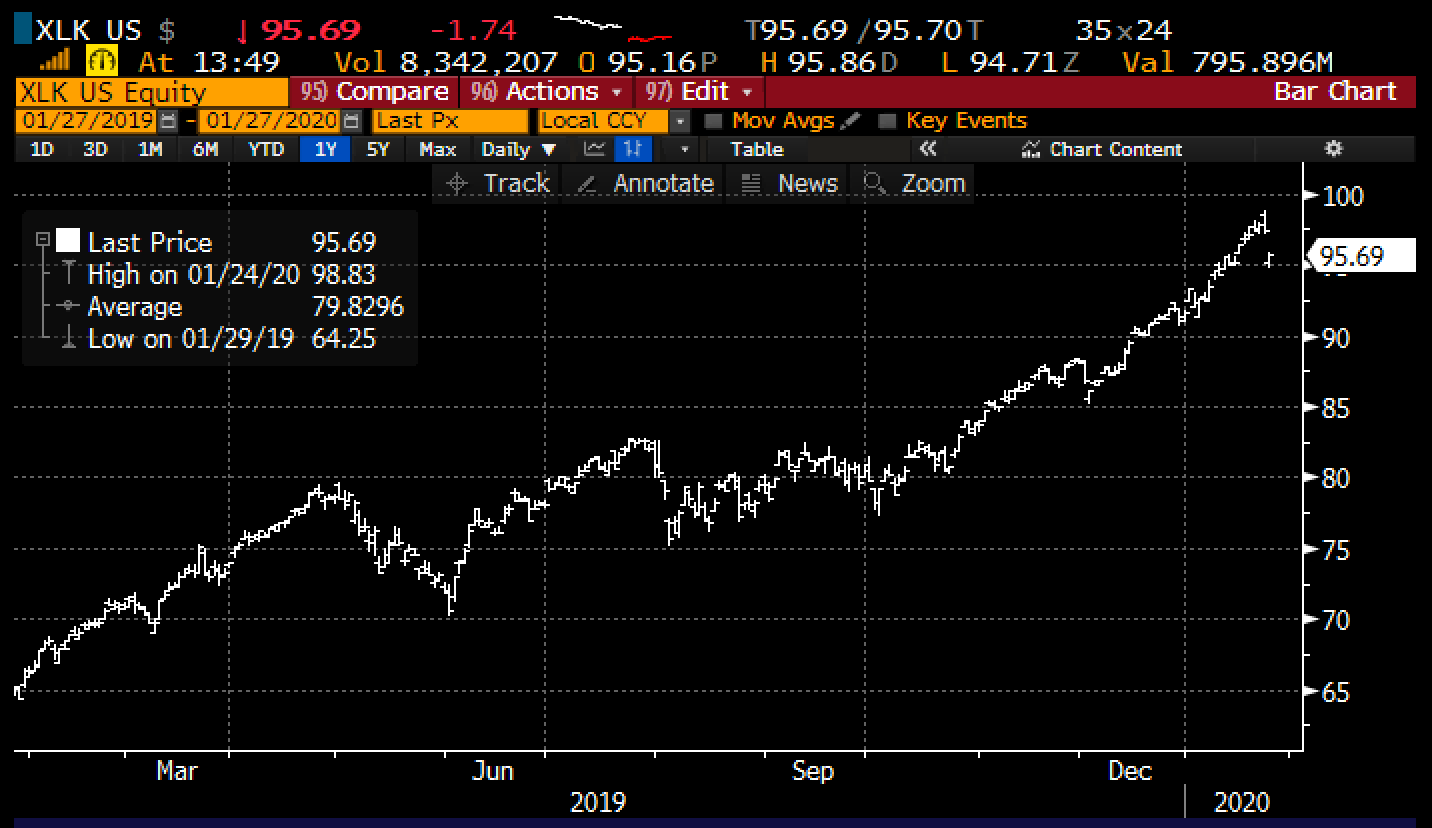 Both AAPL and MSFT report fiscal Q1 & Q2 earnings respectively this week. Together they have a combined $2.6 Trillion market cap, The options market is implying about a 4.5% move on average for the two. If they were both to move in the same direction that could mean a $115 billion move. That’s a big if and an even bigger if that they go the same way. But if they did, and it was lower it could start a mass sell-off in tech stocks that have had a nearly unabated three-month run.

At this point, the safe bet might be that the XLU is unlikely to be able to hold the recent gains no matter what happens in the broad market. If the market were to find its footing and headwinds to growth like coronavirus were to go away, then I suspect defensive sectors like XLU would pull back. And if we did have an epic disaster (not that likely), I suspect the XLU would also join the party, if not to the same degree as it did in Q4 2018, selling off 12% vs the SPX’s 20% peak to trough decline.

With options prices on the etf relatively low, playing for a move back to the January lows near $64 with defined risk offers a very good risk-reward… for instance…

Rationale: this trade idea risks 1.5% of the etf price for almost two months with a break-even down a little more than 1.5% with a max payout approximately 3x the premium at risk.