Boeing Co. is considering either suspending or cutting back production of the 737 MAX amid growing uncertainty over the troubled plane’s return to service and could disclose a decision as soon as Monday, according to people familiar with the matter.

Boeing management increasingly sees pausing production as the most viable among difficult options as the plane maker’s board began a meeting Sunday in Chicago, these people said. Support for halting production comes days after U.S. regulators warned the aerospace giant it had been setting unrealistic expectations for when the jet would be allowed to fly again, these people said.

Cutting production further, following an earlier reduction in April, would inflate Boeing’s costs and trigger charges against its financial results as fixed expenses would be spread among fewer planes. It could also spur job cuts and furloughs across the global aerospace industry, as well as further disruption to airlines hit by the grounding of a fleet of around 800 jets that is likely to stretch to nearly a year.

Boeing has already taken a $3.6 billion charge to cover additional production costs and has set aside $6.1 billion for customer compensation.

The company cut 737 production by a fifth in April and shelved plans to boost output this past summer, forcing suppliers to adjust their own plans to deliver parts and supplies for a backlog of more than 4,500 orders for the jet.

The global MAX supply chain involves about 600 firms, plus hundreds of smaller subcontractors. Boeing has been assisting them through easing payment terms and extending working capital, said companies involved in the chain.

Most MAX suppliers had cut output in line with Boeing’s current 42-plane-a-month rate, which allowed some such as engine maker CFM International, a joint venture between General Electric Co. and Safran SA, to catch up from production bottlenecks that hobbled deliveries last year.

Boeing cut monthly output of the 737 to 42 from 52 last April. Executives said in October that they hoped to resume deliveries in the fourth quarter, and clear the backlog by the end of next year, allowing it to resume its previous production plan. Some airline and industry executives have said it could take two years. Boeing had been planning to ramp up production to 57 planes a month by the end of 2020.

This is obviously an unwelcome headline for a company that has a backlog of 4500 737 Max jets and was expected to make them at about 50 a month for years…Shares of BA are down 3.3% today in this report, miraculously still up about 2.5% on the year. If there is a meaningfully cut to production or a total halt, I suspect the next piece of news will be the departure of their CEO. There are not too many scenarios where I see things turning around too quickly for BA, because once this plane does get recertified, the PR around what Airlines will have to do to get people back in these planes, let alone the consumers desire to avoid these planes will be present for a while.

All that said, I get why existing investors don’t want to sell their stock, because like most unfortunate situations that result in the death of customers, eventually things blow-over. This time might be different as 346 people perished in what is becoming increasingly clear the result of a good bit of negligence on BA’s part and lackluster regulatory oversight.

But time is the keyword.

with sales expected to decline 21% year over year

If the company is to full-on halt production then I suspect 2020 estimates get throttled, CEO is out, and the company is in disarray for at least 2020. If I am long, think upside might be capped, but want to define my risk I might consider a collar, selling an out of the money call vs my long and using the proceeds of the sale to purchase an out of the money put of the same expiration, for instance…

Gains of the stock up to $370, less the $3 in premium paid for the hedge, the investor could always buy back the short call if stock is above $370 to keep the long intact and suffer losses on the call.

Rationale: an investor would place a hedge on a stock in this situation if they did NOT want to sell the shares, but wanted to define their risk tot the downside for a period of time, while also have the ability to participate to the upside to a price. But most importantly, willing o limit potential upside in place of defined risk to the downside. 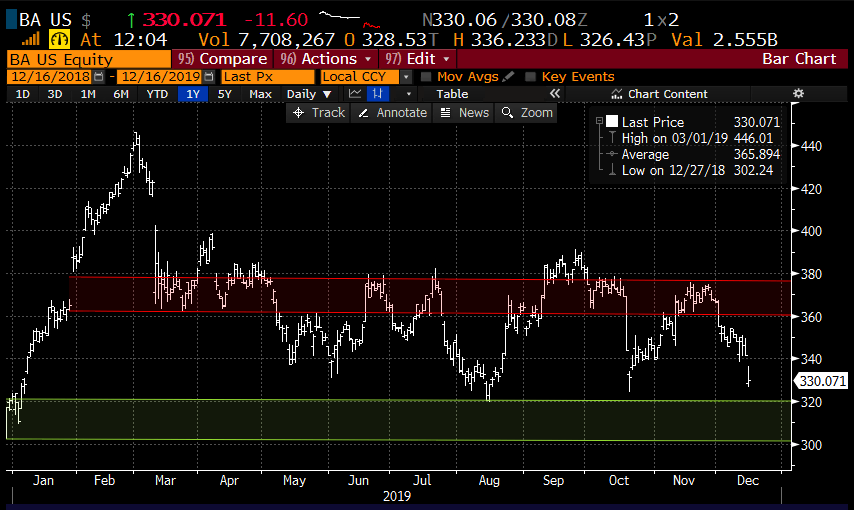 Taking a five-year view of the chart and it becomes clear why put protection at $300 makes sense given the uncertainty: 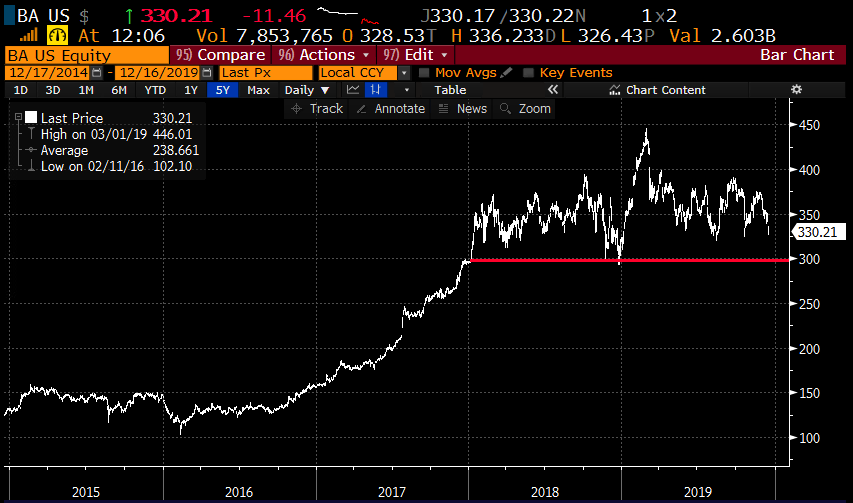