Salesforce.com (CRM) is scheduled to report its fiscal Q3 results today after the close. The options market is implying about a 4.75% move in either direction or about $7.50, which is basically inline with the 4.6% average over the last four quarters, but below its ten-year average one-day post-earnings move of about 5.8%.

With the stock near $160, the Dec weekly 160 straddle (the call premium + the put premium) is offered at about $7.50, if you bought that, and thus the implied movement between now and this Friday’s close, you would need either a rally above $167.50 or a decline below $152.50 to make money.

Shares of CRM are up 17% on the year, massively underperforming the Nasdaq’s 27.5% ytd gains, the S&P 500’s 23% ytd gains and mega-cap software peer Microsoft’s 45% ytd gains. It is also notable that much of CRM’s performance has come in the last month or so with the stock up 13% from its October lows. 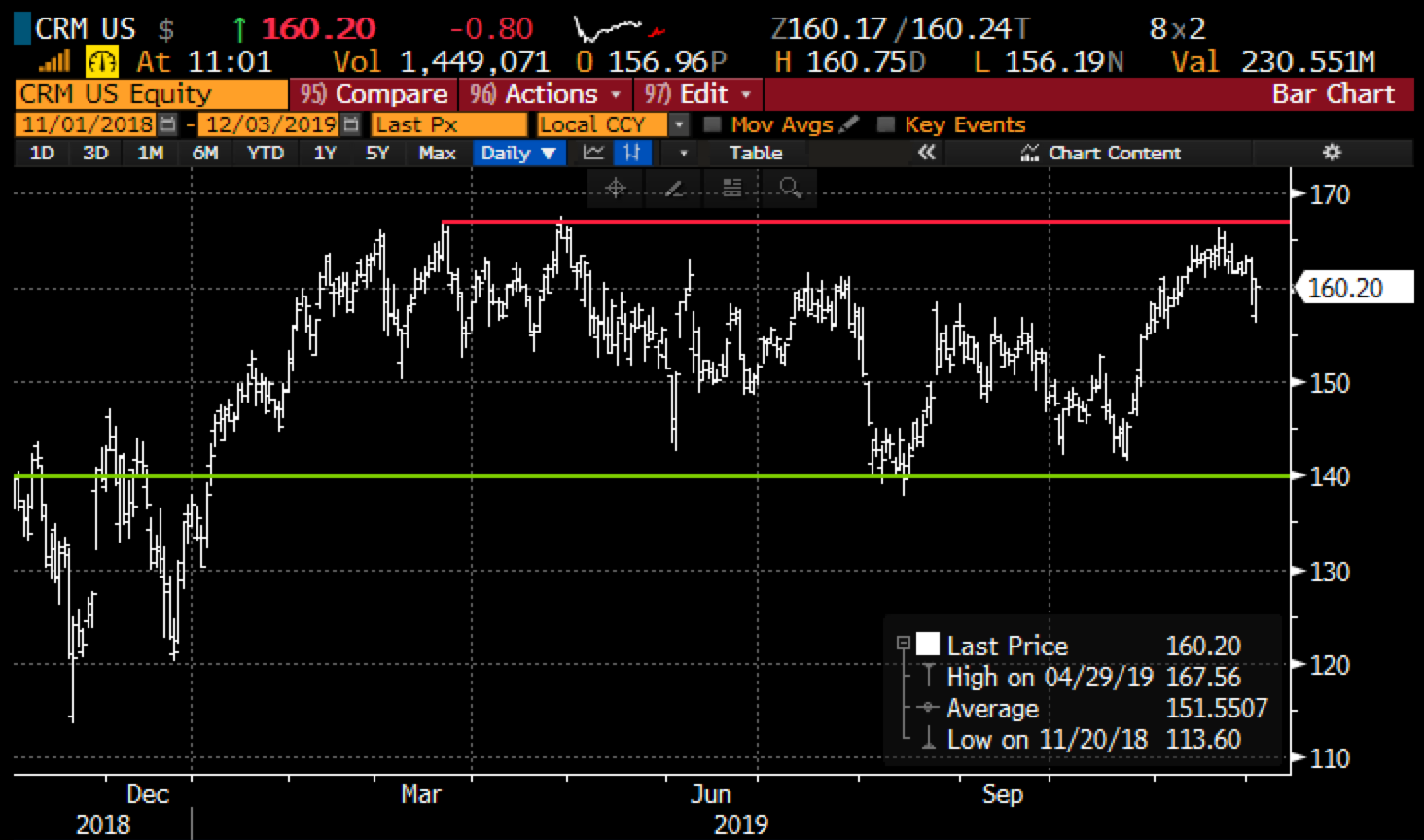 The technical resistance comes at all-time highs near $167.50, while the recent technical support near $140 is the intersection of 2019 support and the three year uptrend that has yielded 100% gains: 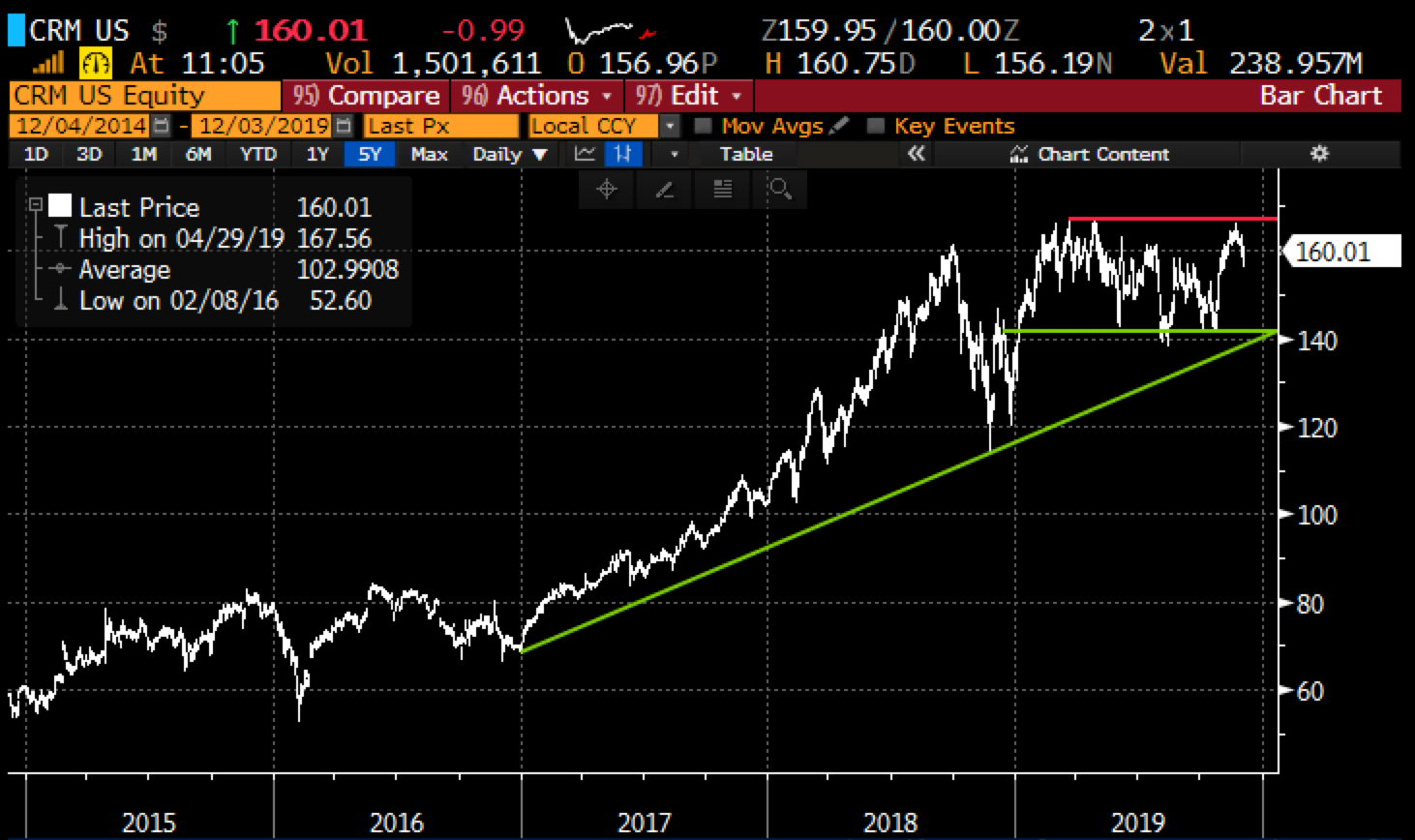 Why the relative underperformance? in a post back in August I cited the following as one potential reason (I don’t think sentiment has changed much despite the stock’s recent rally):

The tech publication, The Information had a fairly detailed take in a recent article, suggesting that their recent announced purchase of Tableau for $157 billion, which the article notes are a greater sum than all of their prior 28 acquisitions combined. They highlight two major issues for the stock of late, one leading to the other, decelerating growth, high valuation, and integration of Tableau:

Salesforce is still growing—revenue rose 26% last year, the fourth year it posted growth in that range. But that’s down from annual growth in the 30–40% range over the preceding decade. Meanwhile smaller, younger subscription software firms like Twilio and Zendesk are growing in the 40–60% range. And the company’s growth has slowed despite the spate of acquisitions—raising the question of how slowly Salesforce would be growing if it didn’t keep buying other companies.

Investors may also be worried about the risks of the Tableau deal. Not only is it much bigger than previous acquisitions, it takes Salesforce in a new direction. The acquisitions of recent years enabled Salesforce to diversify from its original business of selling software that companies use to manage their sales teams. The purchases of InStranet, ExactTarget, Demandware, Heroku and MuleSoft laid the foundations for the company to offer customer service, marketing, online shopping, app development and integration software products, respectively. Each of the services acquired became part of the Salesforce platform, making it easier for Salesforce customers to sign up for them.

Heading into the print short-dated options prices have started to tick up with 30-day at the money implied volatility near 30% (blue line below), which is far below where they were in August prior to the Q2 print above 40%, but realized volatility (white line below, how much the stock has been moving has collapsed) which actually makes options prices look expensive:

So what’s the trade into the print? Despite the stock’s relative underperformance in 2019 Wall Street analysts remain overwhelmingly positive on the stock with 39 Buy ratings, only 3 Holds and NO Sells with an average 12-month price target of about $187, up about 17% from current levels.

The implied move to the upside would bring you nearly inline with the technical resistance level where the stock has failed 4x in 2019.

I might also strongly consider the opinion last night of a guy who has been a massive bull on CRM for years (and very right), Jim Cramer, the host of CNBC’s Mad Money, who had the following to say:

“We’ve seen it regularly since the software-as-a-service meltdown in April of 2014,” Cramer said. “You have to be careful because these kinds of moves can be brutal and, more important, they can be longer-lasting than the typical dip. In 2014 the whole group got hammered, led by Salesforce.com, which plunged from $67 to $48.”

Salesforce, the customer relationship management cloud platform, is slated to report third-quarter earnings Tuesday afternoon. While the stock is about $3 off its November high and the company has consistently topped Wall Street estimates, Cramer warned that investors should be cautious approaching this one because it “may be rolling over” with the cloud cohort.

He pointed out that the security had “four major declines since 2014” and that they were “multiday or even multiweek shellackings.”

“If you’re nimble enough to be a trader, then I actually would lighten up here and then buy it back at a lower level, but for most people that’s a bad piece of advice,” Cramer said. “I think you should stick with it through the pain because you never know if you’ll be fast enough to actually get back in [at] a better price.”

If I were long, and agree with Cramer’s view (as I do) and worried that the stock at 56x fiscal 2020 eps growth which is decelerating and think the stock may be priced to perfection and the slightest weakness in forward guidance might cause a few Bulls to trim the sails of fiscal 2021 estimates and possibly ratings, then I might consider buying a collar against my long stock position (selling an out of the money call and using the proceeds to fund the purchase of a downside put) defining one’s risk to the downside, but also allowing for gains to a certain point… for instance:

Gains of the stock up to $170 between now and Jan expiration, profits capped above $170. On or before Jan expiration investors could always cover the short call strike if the stock is at or above 170 to keep the long position intact.

Losses of the stock down to the 150 long put strike. Protected below 150.

Rationale: an investor would do this if they did not want to sell their long position and are more worried about extreme downside near term then they are about extreme upside. Most importantly willing to suffer losses down to 150 and have gains capped at 170 between now and Jan expiration.