Hewlett Packard Enterprise (HPE) will report fiscal Q4 results today after the close. The options market is implying about a 4.25% one day move tomorrow, which is rich to the 2.75% one-day average post-earnings move over the last four quarters, but basically in-line with the average since 2015.

Shares of HPE are up 30% on the year, one that has to date been fairly volatile with a massive rally in Jan& Feb, followed by a 25% decline into the summer followed by a 35% rally to its current levels, above the prior 52-week highs: 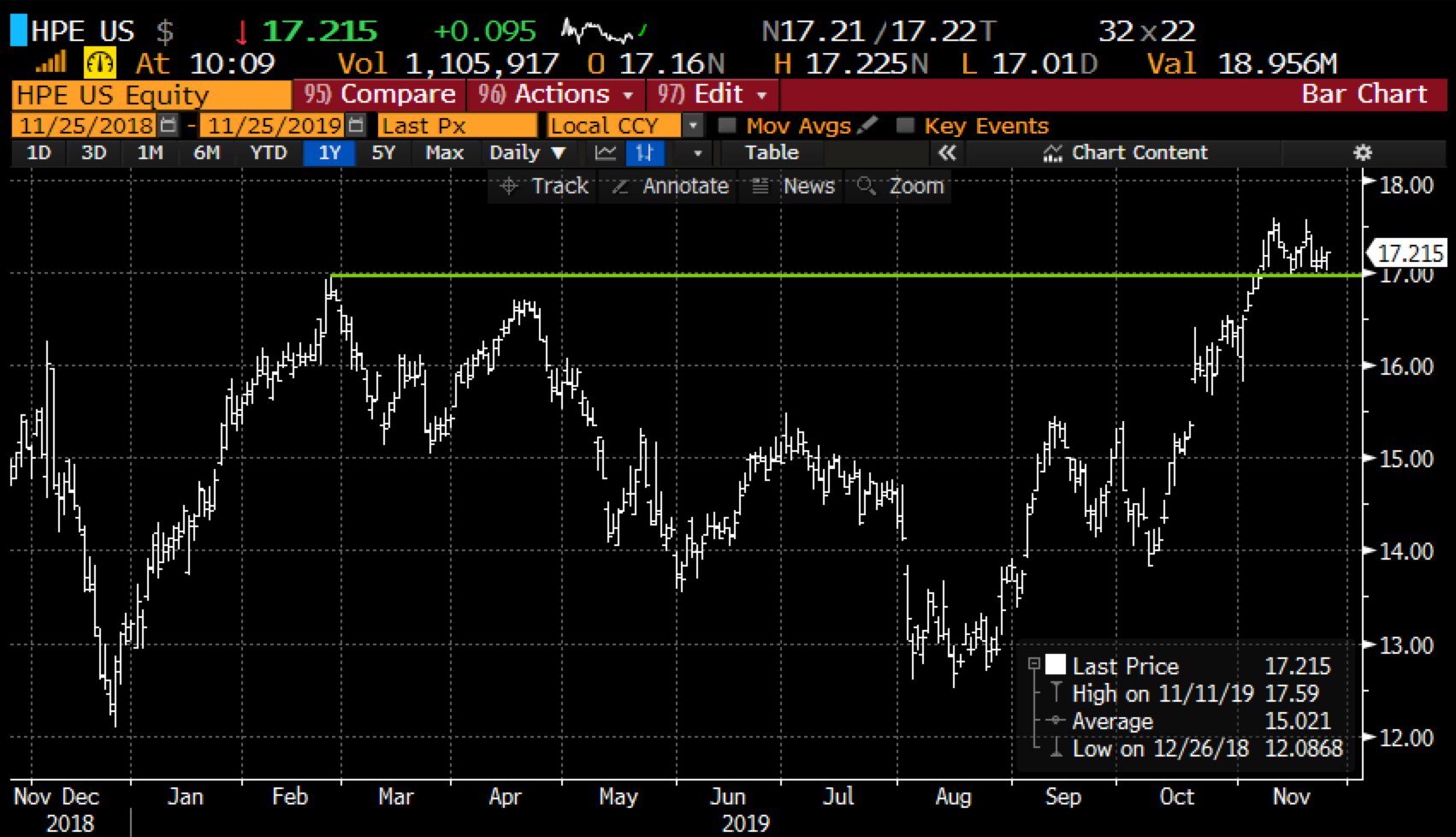 Backing the chart out to 2015 when the company was split in two, supposedly the faster-growing software and services (HPE) and the slower growth, legacy hardware businesses (HPQ), and you can see that the stock has been in a descending wedge pattern for nearly two years, but has since broken out to the upside. 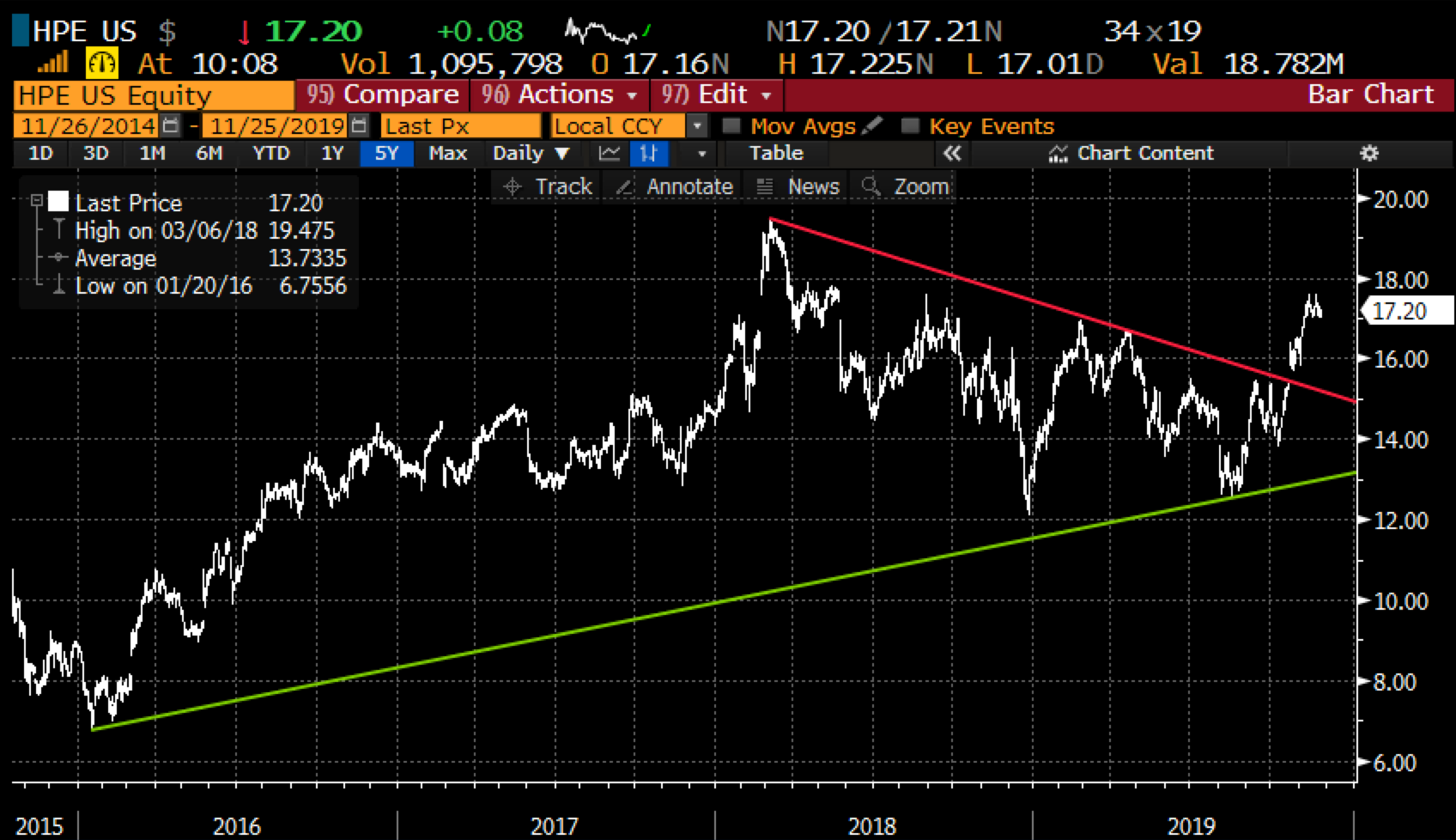 Wall Street analysts are overwhelmingly negative on the stock with only 6 Buy ratings, 15 Holds and 3 sells with an average 12-month price target of $16.55, below where the stock is currently trading.

Shares of HPE trade at about 9.25x expected 2020 eps, which is expected to grow at 7% on 1% sales growth. It is worth noting that Cisco’s (CSCO) recent guidance and commentary extrapolated to HPE (ex-hardware) might suggest weak near-term visibility, per CNBC re CSCO:

“We did see in July some slight early indications of some macro shifts that we didn’t see in the prior quarter,” Cisco CEO Chuck Robbins told analysts on a Wednesday conference call. He said in the quarter Cisco company saw “significant impact” on business in China because of the U.S.-China trade war.

In China, Cisco’s revenue was down 25% on an annualized basis in the quarter, Kelly Kramer, the company’s chief financial officer, said on the call.

“What we’ve seen is in the state on enterprises … we’re just being — we’re being uninvited to bid,” Robbins said. “We’re not being allowed to even participate anymore.” Sales to carriers declined more forcefully as well, he said.

So what’s the trade? The stock’s recent gains might suggest that any and all good-news is IN the stock, but its cheap valuation, leverage to improved global growth, and constructive technical set up could put the stock to a path to the prior all-time highs on a beat and raise… Ill lay out two trade ideas to play both scenarios:

Bearish Trade Idea: play for weak guidance and a re-test of the downtrend that has been in place since the Jan 2018 highs just below $16:

Rationale: this trade idea risks 2.3% of the stock price into an event that breaks-even down 3.7% and has a max potential payout of 6.4% if the stock is down 10% in a little less than a month.

Bullish Trade Idea: play for a move in the next couple months back towards the 2018 all-time high near $19.50:

Rationale: upside calls look dollar cheap and don’t look like great sales to form call spreads, if the stock started to go higher I might consider selling a higher strike call and make a vertical call spread or look to roll up and out on any gaps.