Today after the close Skyworks Solutions (SWKS), a semiconductor company that gets more than a third of its revenues from Apple iPhones in one way shape, or form will report fiscal Q4 results. The options market is implying about a 6.5% one day move tomorrow, with the stock at $102 the Nov 15th weekly 102 straddle is offered at about $6.50, if you bought that, and thus the implied weekly movement you would need a rally above $108.50 or a decline below $105.50 to make money by Friday’s close. SWKS has moved about 8% on average the day following its last four quarters.

Shares of SWKS are up 52% this year, making new highs daily since its Nov 1 breakout following better than expected earnings and guidance from competitor Qorvo (QVRO), which is also a 30% plus customer of AAPL: 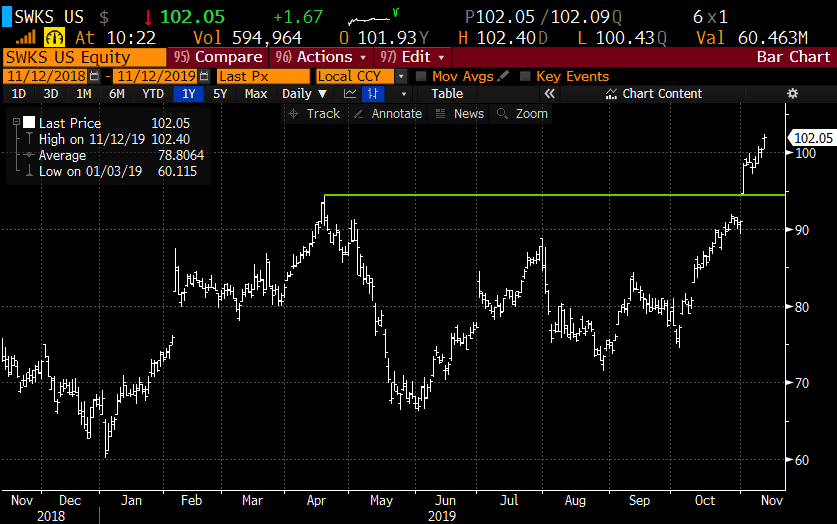 Looking at the five-year chart of SWKS you see the breakout above a descending wedge in early Oct which has proven to be nothing short of powerful, but I suspect it will be very hard to sustain this upward momentum given the already positive sentiment into the print with the 2017-2018 highs near $115 serving as massive long-term resistance: 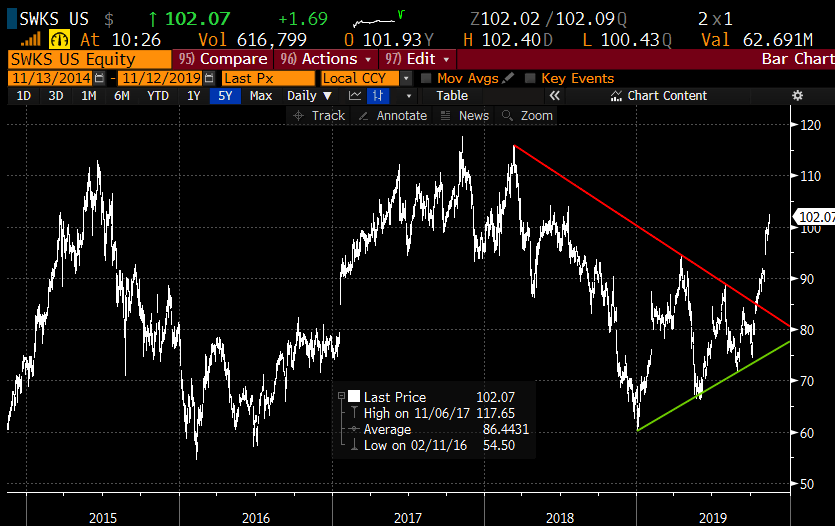 Despite the stock’s ytd performance, and cheap valuation (trading 16.5x expected 2020 eps) Wall Street analysts remain fairly mixed on the stock with 15 Buy ratings, 11 Holds and 2 Sells with an average 12-month price target of $91, well below where the stock is trading. EPS and sales which were down mid-teens % in 2019 are expected to rise 10% and 7% respectively in 2020, not exactly gangbusters when you consider their exposure to the smartphone market that is expected to be on the cusp of a major 5G upgrade cycle in 2020.

So what’s the trade? I am not sure the company will have the visibility given the continued trade uncertainty and what might be overly optimistic forecast for iPhone sales in China, a year after iPhones sales were down 30% in the region in the calendar Q4 2018. While SWKS and QRVO have plenty of exposure ex-AAPL (Samsung & Hauwei are large customers) they are widely perceived to be proxies for AAPL’s iPhone sales.

If I were inclined to play for a disappointing quarter and a retracement this week to the mid $90s, the Nov 1 breakout level, that should serve as decent near-term support I might consider a weekly put spread, for instance…

Rationale: this is a fairly binary trade, with 3 trading days to get it right. Get the direction wrong tomorrow and the trade has a high probability of being a total loss if not exited quickly. This trade risks 1,5% of the stock price for 3 days to possibly make 3.5%, so a potential 3 to 1 payout if the stock is down a little more than the implied move, which the options market places at about a 20% probability.

Alternatively, I think the likelihood of a massive gap is not great, and if you were inclined to play for further consolidation near these highs, but a reignition of upward trajectory in the new year I might consider a call calendar… for instance

The idea scenario is that the stock is at or near the 105 strike price and the short Nov 105 call expires worthless or can be covered for a small amount. At that point, the trade is left long the Jan 105 call for just $2 with 2 months to expiration. At that point you could sell a higher strike call in Jan turning into a vertical call spread, further reducing the premium at risk or let it ride a bit outright.