Disney (DIS) will report its fiscal Q4 earnings on Thursday, November 7th after the close. The options market is implying about a 3.8% move in either direction next Friday, or about $5, which is rich to its average one-day post-earnings move over the last four quarters of about 2%. With the stock at $132.50 the Nov 8th weekly 132 straddle (the call premium + the put premium) is offered at about $5 if you bought that, and thus the implied weekly movement, you would need a rally above $137 or a decline below $127 to make money.

Last night on CNBC’s Fast Money program my co-panelist Tim Seymour did a “FastPitch” on Disney, which I agreed with all of the fundamental points he made, but from my comment towards the end, you can see I am less sure about the long entry in front of a couple of important near-term catalysts.

.@TimSeymour has a World Series-level pitch. Check out why he’s all-in on Disney. $DIS pic.twitter.com/xsCuyKNXzi

So here is my issue… and maybe today’s bounce in the stock gives bulls more conviction that the $130 support level will hold, but let’s consider what the drivers are for the stock, and what we might or might not get from the company when they report?

First things first, the gap above $120 in April on the announcement of their soon to be launched Disney+ streaming service came after a more than four-year base: 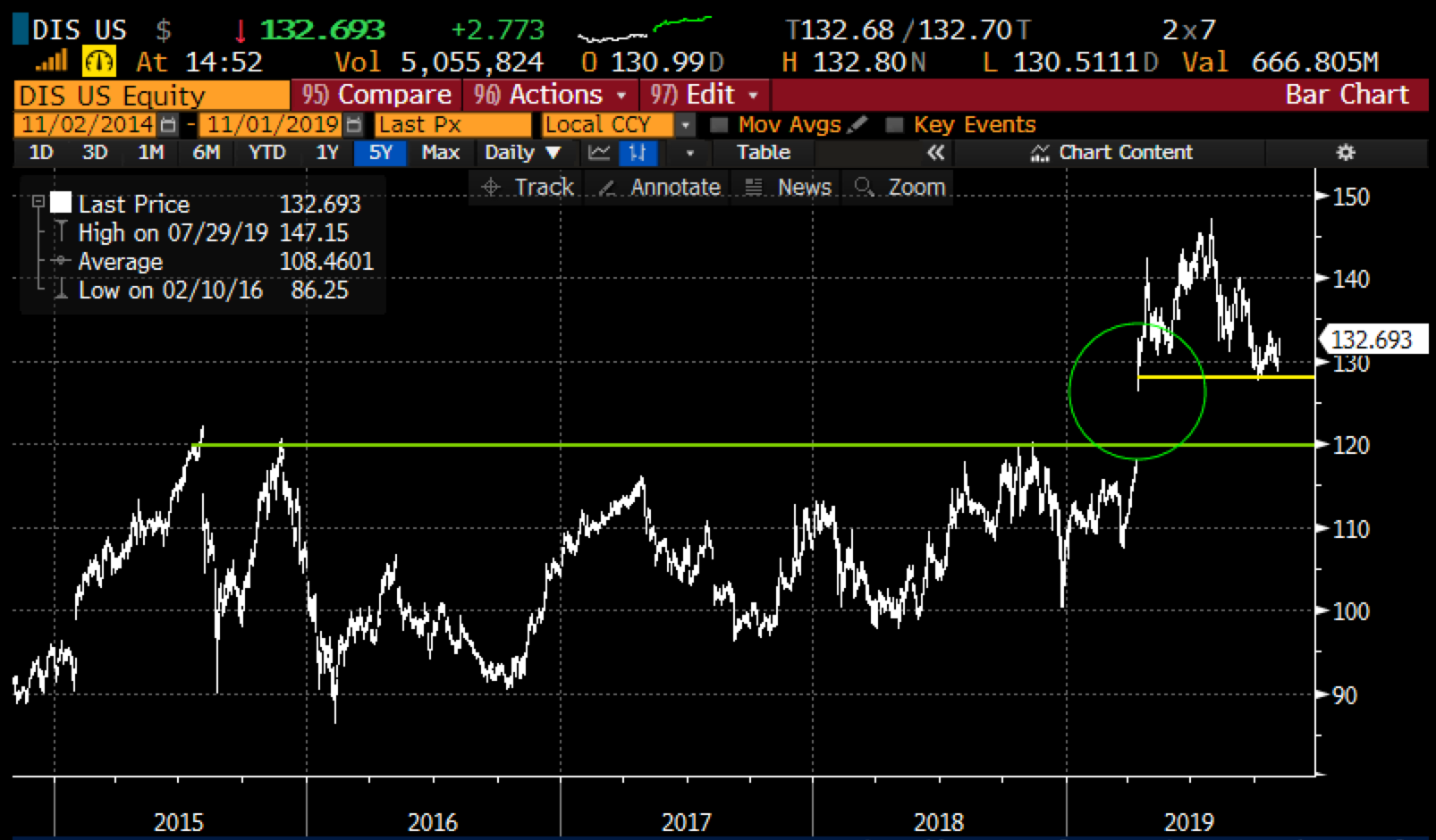 It is my opinion that it would take a massive market decline or a material miss-execution by the company in the near-term for the stock to trade meaningfully below that $120 support level.

Which brings me to next week’s report, estimates for subscribers for their streaming service are all over the place with some thinking they could be between 5 to 10 million by the end of this year and as high as 20 million by the end of next year, but in 5 years maybe 120 to 130 million below Netflix’s current 158 million. But this is all guessing as DIS+ offering is very different than NFLX, most importantly the price point at $6.99 vs NFLX most popular $12.99 offering and also important is that NFLX will no longer have DIS content. After last week’s announcement that Verizon will give their unlimited customers one year free of Disney+, investors will like to get a sense of just how many of VZ’s 150 million subscribers are unlimited and what will DIS get paid for this offering. I suspect for no shortage of competitive reasons the company will keep all of this close to the vest, and investors might be disappointed in the lack of clarity on sub expectations despite the report coming less than a week before the official launch of the offering.

And now back to the chart, the one year below shows the stock’s bounce yesterday off of its 200-day moving average and the level it has held since the April gap. But it also shows the air pocket to the downside which would be back towards $120, or about 10% lower:

It is my sense that DIS+’s original content like the Mandalorian will be very well-reviewed and the catalog of Disney, Pixar, Lucas and Marvel will be to the streaming bundle that HBO was to the cable bundle for decades. This sort of quality of content and offerings is one of the main reasons why DIS has commanded a rich multiple to most media peers and clearly the broad market for most of its existence.

So what’s the trade? I can’t tell you with any certainty that $132.50 is the right entry for a long-biased trade if you are playing for more positive news on their streaming operation, but I can tell you that this is a stock that should do just fine if the market is to breakout and the company does not underdeliver on this key initiative, let alone the integration of the recently acquired Fox assets.

If I were inclined to play for a move back to the prior highs, but looking to give myself a little room the downside to work into the position I might consider a strategy called a risk reversal, where i would be selling a downside put to help finance the purchase of an upside call in the same expriation. For instance…

Rationale: this trade strategy is basically risking less than 1%  of the stock price to have exposure above $140 and below at $120. I think most bulls in the stock would look to add to the stock at $120.