Today after the close Facebook (FB) will report their Q3 earnings results. The options market is implying about a $12 move in either direction tomorrow, or about 6.5%, which is rich to the 5.5% average one day move following the last four quarters.

Shares of FB are up 42% on the year, up 51% from its 52-week lows in made in late December, but recently have stalled out a bit, down 10% from its 52-week high made in late July prior to its Q2 report and down 15% from its fairly epic all-time high in July 2018 when it dropped 19%, the largest one day drop of any stock in market cap terms. Near-term the stock has found some support in and around its 50, 100 and 200 day moving averages: 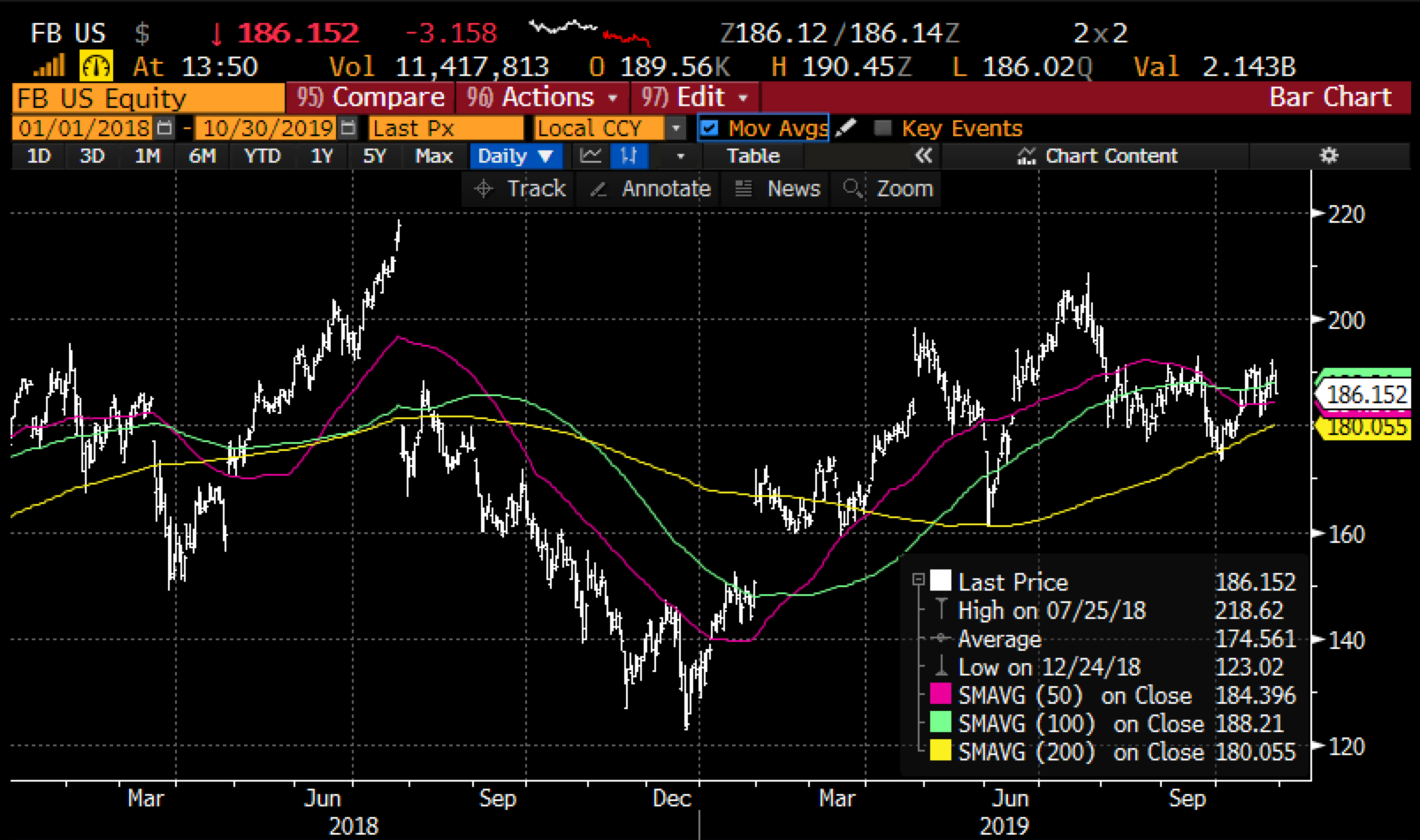 Looking at the year-to-date chart $175 looks to be an important near-term support level, or possibly the neckline of an emerging head and shoulders top pattern: 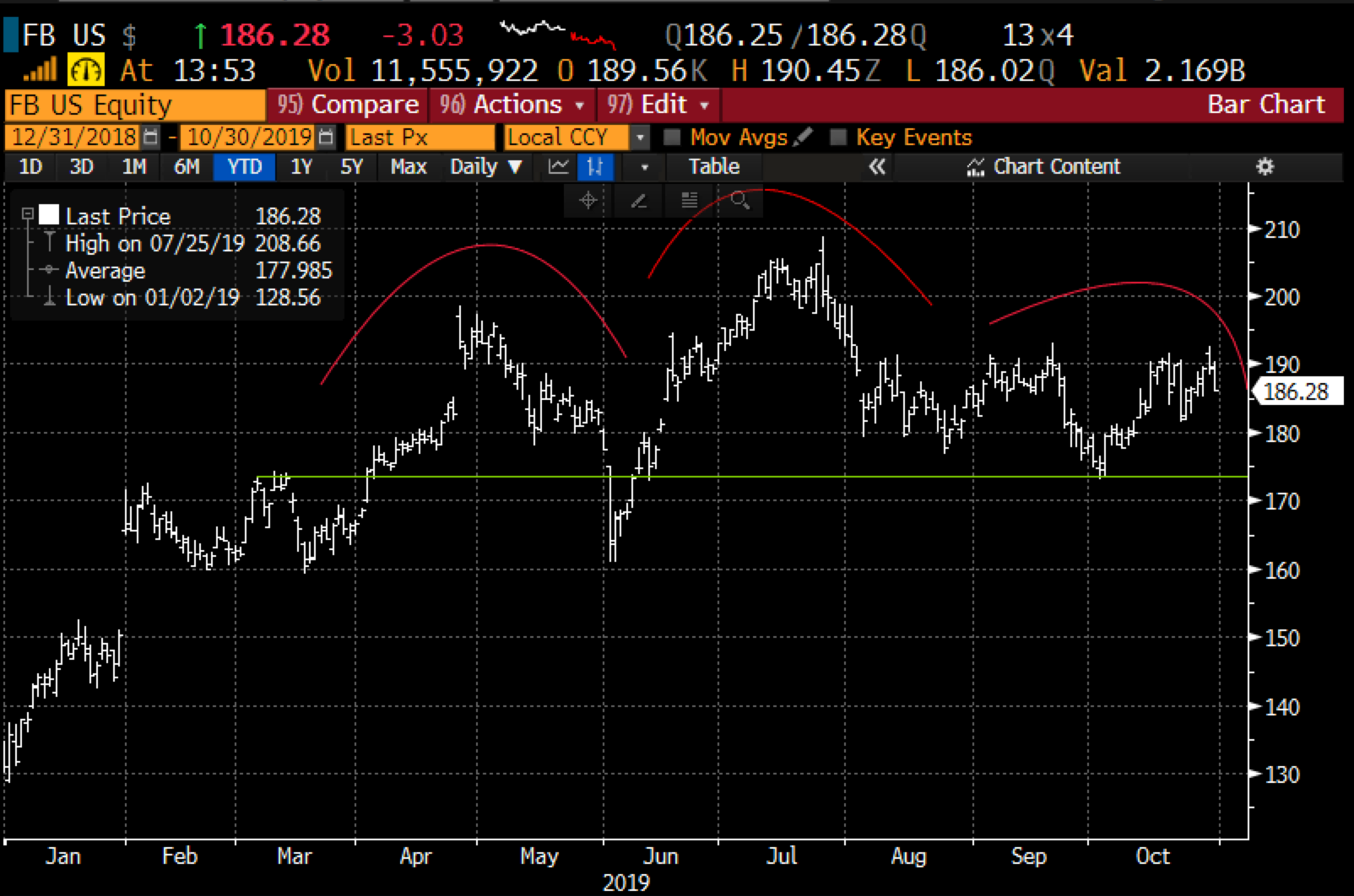 You could also draw an uptrend from the December low, and see the break below it last month and the rejection this month on a couple of occasions at the former support level (which is now technical resistance) as an important level to shoot against on the short side: 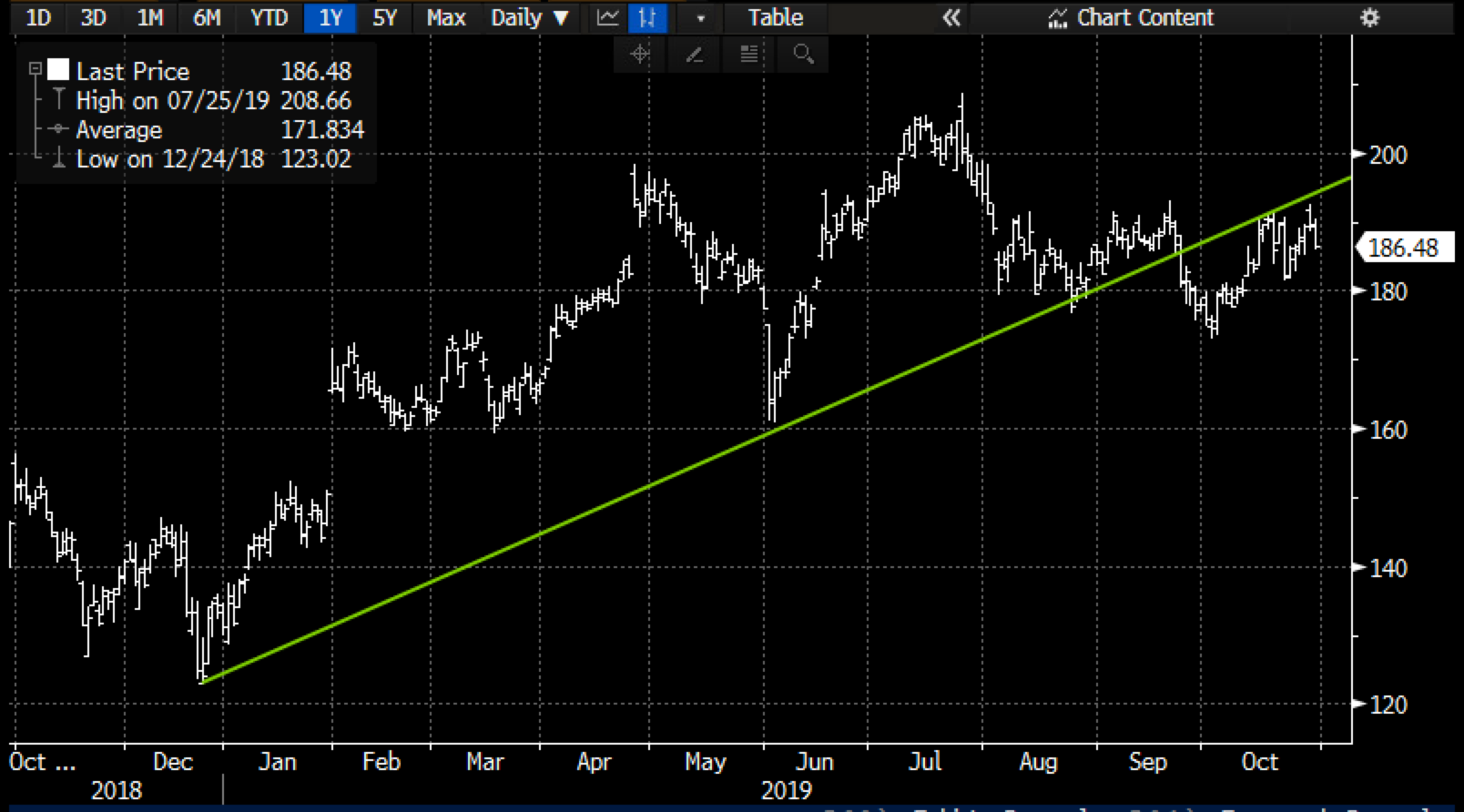 Despite what seems to be no shortage of negative headlines for the company, Wall Street analysts remain fairly steadfast in their Bullishness with 47 Buy ratings, 5 holds and only 2 Sells. One reason for that is that despite the year over year deceleration in eps growth from 26% in 2018 to an expected 5% in 2019, sales are still expected to grow 26% yoy in 2019 and 22% in 2020 to a whopping $85 billion, and the stock trades at just 20x next year’s expected eps. Simply put the stock is cheap, especially for a company that has one-third of the world’s population as a monthly active user.

There are a couple of things that might cause investors and analysts to take a pause on the stock, most notably weaker user engagement/growth and continued deceleration in gross margins which peaked at 87.47% in 2016 and are expected to be 80.79% this year. I suspect given Google’s results earlier in the week that the FB results will be fine and it comes down to spending at a time where the company faces significant regulatory scrutiny which includes fines massive fines and pressure to secure user privacy and safeguard the platform into the 2020 election season from bad-actors.

If I were inclined to play for a sell-off over the next couple months I might consider a re-test of the June lows:

Rationale: this trade idea risks 2.5% of the stock price to make up to possibly 8.3% if the stock is down 14% by December 20th expiration.

If I were inclined to play for a bounce I might target the $200 level near term a level that appears to be overhead resistance:

Rationale: this trade idea risks 1.6% of the stock price, for a break-even up 3.2% well within the implied move with a max gain up 7% in two weeks from the current trading level.