On October 1st, a week after Nike’s (NKE) better than expected fiscal 2020 Q1 results, I detailed a collar strategy for long holders after the stock had broken out to an all-time high (read here), suggesting:

NKE’s results are defying some of the narratives about global trade, as no shortage of consumer brands who rely on overseas sales for growth are struggling this year with the uncertainty of tariffs, China’s and Europe’s slowing growth and the resurgent U.S. Dollar, NKE share price is buoyant, up 26% on the year.

Earlier this year in August after first threatening a new round of tariffs on consumer goods coming into the U.S. from China, trump put off a good slug of threatened $300 billion until December 15th after the bulk of the holiday selling season. If there is no more progress in the coming months on a trade deal, and I suspect there won’t be much by way of a substantive deal that includes the reasons for the tariffs in the first place (combatting China’s practices of forced technology transfer and IP theft) than there is a good chance we see these consume tariff’s in mid December. If that were the case long holders of stock’s like NKE might look to lock in gains between now and year-end and protect below key support at $90.

At the time the no cost hedging strategy looked like this with the stock at $94:

To do so without selling your shares, while also allowing to participate in some upside, to a point, an investor could consider a collar, a hedging strategy where they sell 1 out of the money call vs 100 shares of long stock and use the proceeds to buy 1 out of the money put of the same expiration, thus collaring their stock, with gains stopping at the short call strike, and losses stopping at the long put strike, for instance…

Profits of the stock up to $100 (less the 60 cents premium paid for the hedge), the stock on Dec expiration would be called away at 100 or higher, but the investor could always cover the short call to keep the long position intact.

Losses of the stock down to $90 (plus the 60 cents paid for the hedge), but protected below.

Rationale: a long holder of NKE would place a hedge like this on their stock if they wanted to lock in gains to a certain point, and importantly willing to give up upside above $100 in the next two and half months in return for protection below $90.

Shares of NKE traded $96.87 on Oct 21st, but has since come in hard following last week’s announcement of a CEO change, now threatening the important support level of $90: 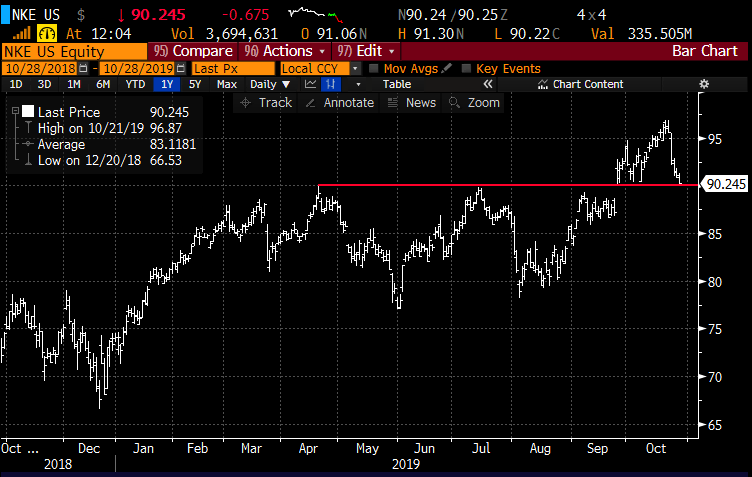 The collar strategy detailed above was meant to protect against a failed breakout followed by a considerable decline below technical support. So let’s take a look at how this collar that costs 60 cents when the stock was 94 looks now. The Dec 100 calls that could have been sold at $2.10 on Oct 1st when the stock was $94 are now worth only 40 cents for a $1.70 profit.  The Dec 90 puts that could have been bought on Oct 1st when the stock was $94 are now worth $3.10 for a 40 cent profit. The Collar that cost 60 cents on Oct 1st is now worth $3.50. Importantly though, the stock is down $4 from Oct 1st, so all in all the whole position is down 50 cents. While down is worse than up when owning a stock, it is important to remember the rationale in the first place for placing a collar hedge on a long stock position “a long holder of NKE would place a hedge like this on their stock if they wanted to lock in gains to a certain point, and importantly willing to give up upside above $100 in the next two and half months in return for protection below $90”.

What to do now? I think it makes sense to manage this collar, it  makes little sense to stay short the Dec 100 put for 40 cents, so I would cover that, but I would also look to turn the long Dec 90 put into a put spread by selling a lower strike put in Dec expiration, selling the Dec 82.50 put at 95 cents. That roll would result in a 55 cent credit adding to the mark to market credit of the hedge. This position would look like this, long NKE at $94, so down nearly $4, but also long the Dec 90 – 82.50 put spread for $2.25. The new hedge protects down to $82,50 plus the credit of $2.25, so really down to $80.25 between now and Dec expiration, which on the chart looks like very healthy support.

I would add that for those bullish on NKE and think that when they report Q2 results in Dec that the stock will act similarly to the way it did when it broke out in Sept on strong results then It might make sense to own calls for the earnings that are tentatively scheduled for Dec 20th. If I were inclined to play for another beat and raise I might consider a call calendar, selling short-dated out of the money alls to help finance the purchase of longer-dated calls that would capture earnings, for instance…

This trade performs best with a gradual move towards the 92.50 strike over the next three weeks into Nov expiration. If the stock is below 92.50 on Nov expiration the short 92.50 call will expire worthless and the trade will be left naked long the Dec 92.50 call. If the stock is close to 92.50 then the Dec 92.50 call will have appreciated as it will have picked up deltas. At that point it might make sense to further reduce the premium at risk by selling a higher strike call in Dec turning the trade into a vertical call spread. The max risk of this trade is $1.60 premium paid, and would be at risk with a large move below the current level, or well above the 92.50 strike.