Intel (INTC) will report its Q3 earnings tonight after the close. The options market is implying about a 4.5% one day move tomorrow which is in-line to its four-quarter average one-day post-earnings move.

Shares of INTC are massively under-performing the SMH (the ETF that tracks the group, of which INTC is its second-largest component at 11.65%) up only 11.5% vs the Semi etf up 39%!

The stock has been faced with fairly hefty technical resistance in and around current levels which is also the level the stock gapped to in April following disappointing Q1 results and guidance: 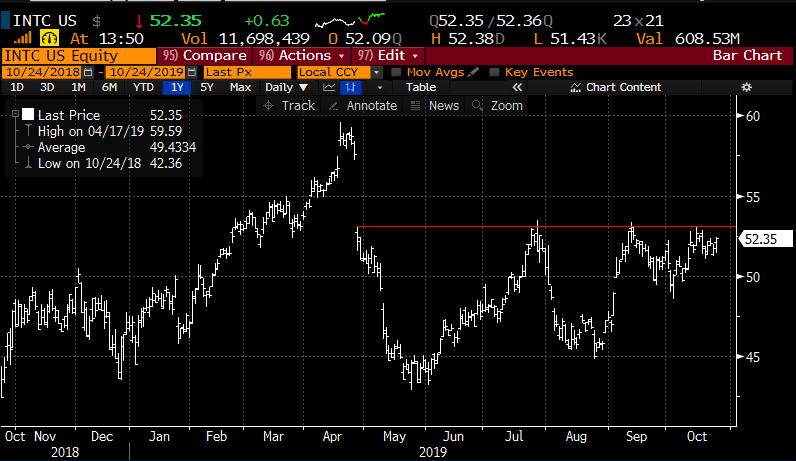 Analysts appear to be well-positioned for the stock’s relative underperformance to its group with 15 Buy ratings, 21 Holds and 9 Sells.

My friend Jared Weisfeld, tech specialist at Jeffries lays out the fundamental investment debate as such:

It’s an interesting set-up (what isn’t these days) as sentiment is fairly negative (although SI is on lows) but most are expecting a robust Q3 given well-known PC strength in the quarter as observed by IDC/Gartner (+1-3% y/y) and confirmed by MSFT last night. With that said, there are investor concerns given the divergence between PC Sell-In and Sell-Through and when that gets realized? And the near-term Q3 strength is a function of pull-in from Q4. There is additional investor concern on the PC Shortages that have seemed to resurface. To the numbers…INTC guided Q3 revenue to $18BN and consensus is right in-line. The Company also guided Q3 gross margins to be flat sequentially (61.6%), which many are viewing as conservative on a +9% revenue quarter, despite the increase in 10nm start-up costs. Some are also of the view that we could see gross margin upside across the board to the extent the Company pushes out its 10nm trajectory, and while positive for gross margins, that would be a problem for the stock’s multiple. From a Q4 perspective, they are up against a tough bogey as consensus has DCG growing +11% q/q against normal seasonality of + high single digits. The Company did a nice job managing gross margin expectations into December, guiding down gross margins by 300-350bps despite a +5% q/q increase in revenues (as implied by their FY guide), although 10nm start-up costs will weigh, combined with the roll-off of the NAND grant.

Bottom-Line: Many are expecting Q3 revenue upside given strength in PCs and Modems (AAPL) –$18.5BN in revenue seems to be the revenue number for Q3- and while there is risk to Q4 consensus from a DCG perspective, most think that Q3 strength will be more than enough for the Company to maintain the FY revenue guide w/no changes to the $15.5BN CapEx guide.

If you think the company is able to beat Q3 and guide up for Q4 then the stock is likely to fill in the April gap back towards $57.50, up about 10% from current levels, and I might consider the following call spread in Nov:

Rationale: this trade idea breaks-even up 3.25% and offers a potential payout of nearly 3 to 1 or 5.5% of the stock price if the stock is up 10% in three weeks.

If you think INTC will miss and/or guide down then consider a put spread in Nov, for instance…

Rationale: this trade breaks-even down 4.5% and offers a 4 to 1 potential payout if the stock is down 12% in three weeks. This trade is playing for a re-test of the lows made in late August.