Back on Sept 6th, (One More Thing) I made a near-term bullish case for shares of AAPL when the stock was trading  $213.50 suggesting the technical set up looked positive, and the narrative around trade in the near-term might provide the catalyst for a breakout and a run to last year’s all-time highs near $233:

On July 31st shares of AAPL gapped to a new 10-month high following their FQ3 results,, but the stock found sellers at $220 and the stock quickly retreated below $215. The following day on August 1st trump tweeted a threat of new tariffs on consumer goods made in China, which would affect many of AAPL’s products and the stock dropped another 10%. It has since recovered on the pushout of some of the tariffs and optimism that talks between the U.S. and China later this month or early next month could yield a positive outcome for AAPL, which would be one of the most adversely affected U.S. multinationals by any escalation in the trade front. AAPL could face the double whammy of U.S. consumers putting off upgrades of phones if the company tries to pass on the increase (or face lower margins by them absorbing them or a mixture of both) AND the longer the trade war goes on the greater the potential for Chinese consumers to choose local smartphone brands like Huawei which happen to be a lot cheaper than Apple’s iPhone.

With the stock now at $226 just 3% from last year’s all-time high and the Oct 215 calls worth $12.50, or nearly double what they would have cost a month ago when then stock was $213.50 I think it makes sense to take profits, or if still bullish look to roll up and out a bit.

But, given the tone of trade talks and my long-held belief that AAPL will be one of the last battles fought in this trade war, I suspect this might weigh on sentiment on the stock just below the prior highs…nearly perfectly book-ending the last 12-months.

The one year chart below shows AAPL’s 40% peak to trough decline in the fourth quarter of last year, and the massive 60% rise in the stock from it’s Jan 2nd low that came after the company’s first negative earnings pre-announcement in more than a decade. I suspect that AAPL may face similar challenges in China this Q4 a region that accounts for most of the company’s future growth, about 25% of their total sales and was down 30% year over year last calendar Q4. I am hard-pressed to see AAPL’s results and guidance expected in the last couple days of the month to cause the stock to meaningfully breakout given the trade headlines. 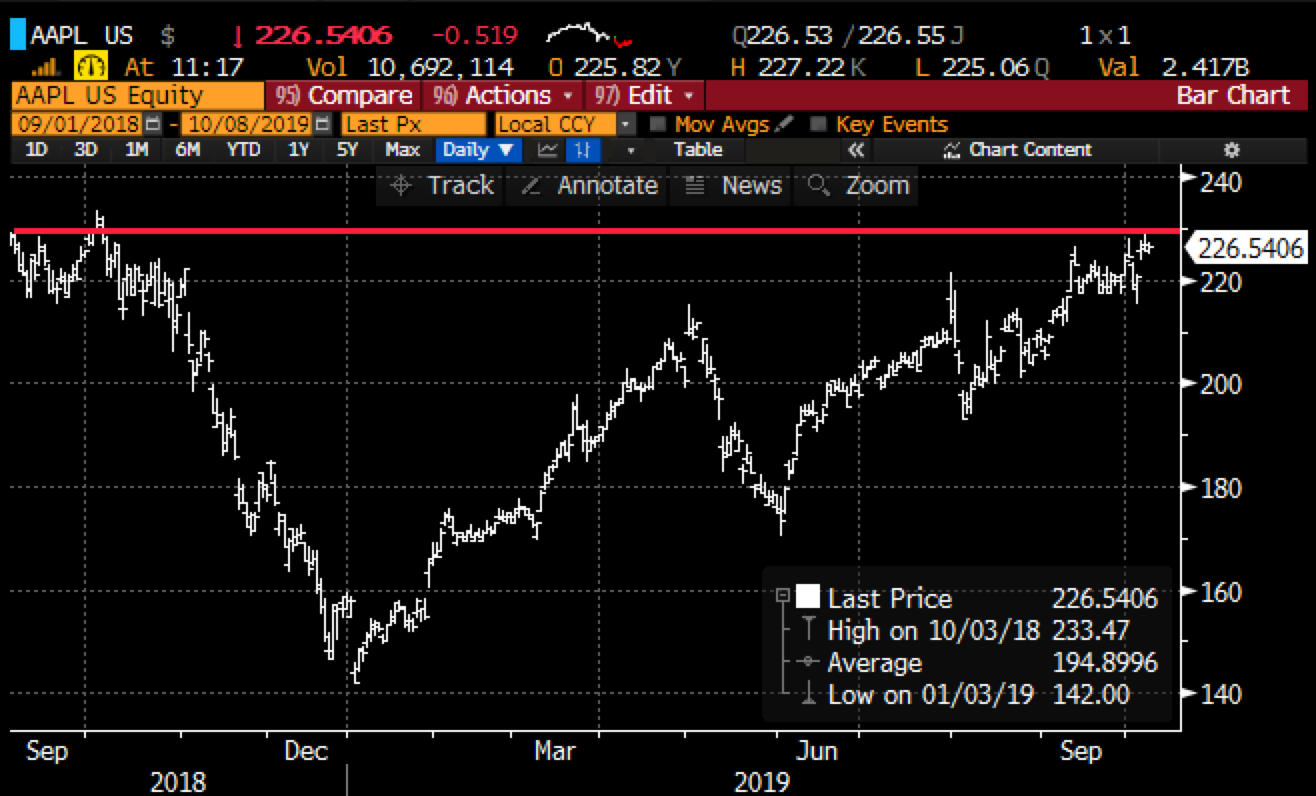 As the stock has risen of late, short-dated options prices have also risen, which is normal in the weeks in front of earnings, with 30-day at-the-money implied volatility at 30% making long premium directional trades slightly challenged:

If I am AAPL management, with their stock near another all-time high, no matter how good I felt about my business at the moment I would offer conservative guidance to avoid having to issue a profit warning as they did in early January after the stock had already gotten creamed.  If there is no meaningful progress on trade before their call, and no matter how good iPhone 11 sales are in North America and Europe, I would offer cautious guidance.

If I am long the stock, not interested in selling the stock, but more worried about a gap lower on earnings than high, I might consider collaring my stock… for instance:

Profits of the stock up to 240 (less the 50 cents premium paid for the hedge). If the stock is 240 or higher the stock would be called away, unless the short call was covered to keep a long position in place.

Losses of the stock down to 210, but protected below (plus the 50 cents premium paid for the hedge)

Rationale: a long holder of AAPL would place a hedge like this on their stock if they wanted to lock in gains to a certain point, and importantly willing to give up upside above $240 for the five weeks in return for protection below $210 over that time period.