The U.S. stock market had a whippy week, at its lows Thursday morning it was down 4% from last Friday’s close on a confluence of events, most notably weak services data and the growing chaos in the White House, the unhinged behavior of its main inhabitant that is likely going to result in the President being impeached in the House of Representatives. 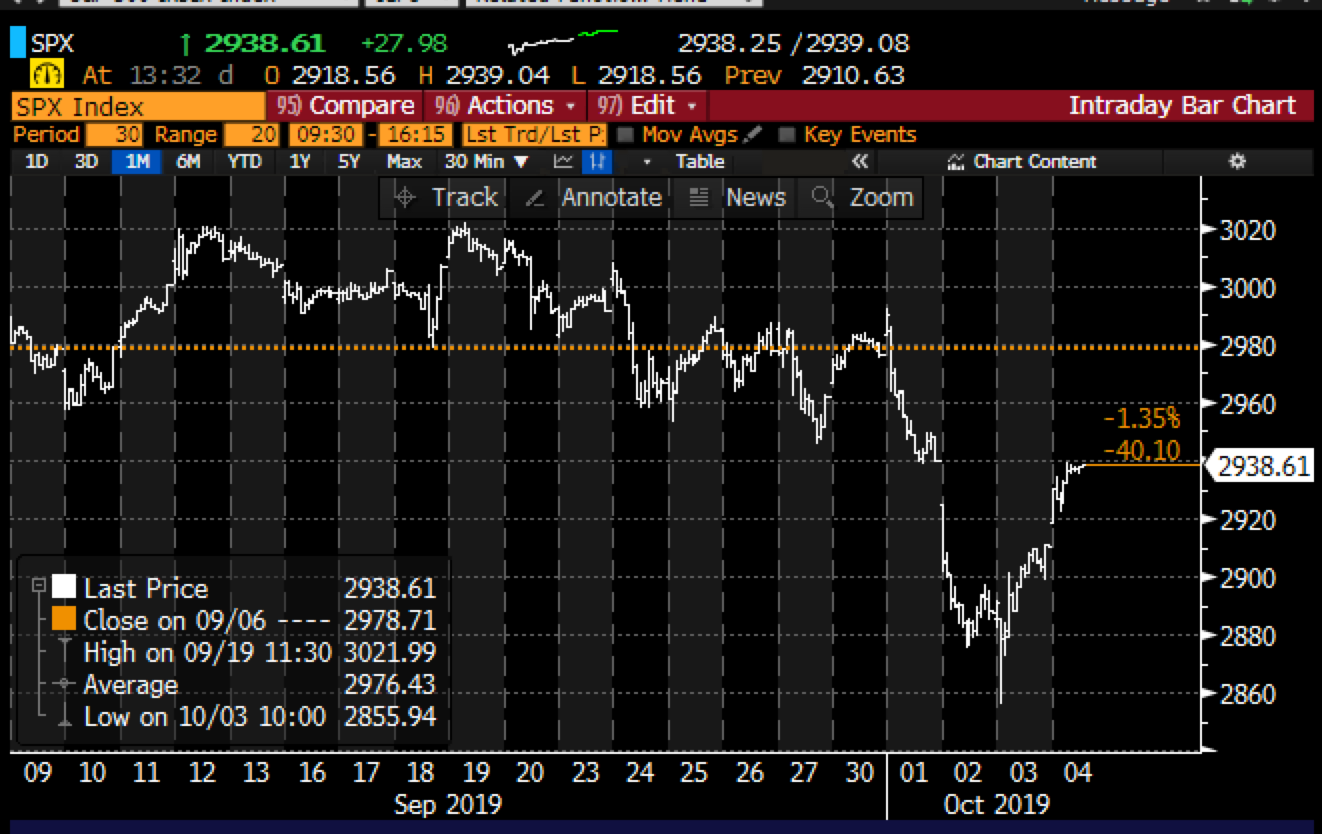 The S&P 500 (SPX) has jumped nearly 3% following the weak data on increased optimism that the Fed will cut interest rates again by a quarter-point for the third time in three meetings at their Oct 30th meeting, and also the usual rumblings of progress on a trade deal with China in front of the high-level meetings to take place next week in Washington.

If there is a deal it will not a substantive one that addresses what should be our countries main reason for being in the fight, forced technology transfer, IP theft, access to Chinese markets and subsidies but merely focus on the thing few economists with a brain care much about, our trade deficit. Any announcement next week where China will resume buying our soybeans and pork, push out some planned tariffs and the promise to adhere to some loose principals on fair access will likely be a sale once the short squeeze peaks. I maintain a simple premise that as long as trump’s legitimacy is being challenged by our democratically elected congress, the Chinese have little incentive to do a substantive long term trade deal.

There are some that say China’s whose growth is expected to slow to over 6%, the lowest in decades this year needs a deal more than we do, I might point you to some data this week that suggests that their autocratic single-party rule that centrally plans their economy might be able to hold out a tad longer than embattled trump whose approval rating is going down while public opinion for impeachment is going up. 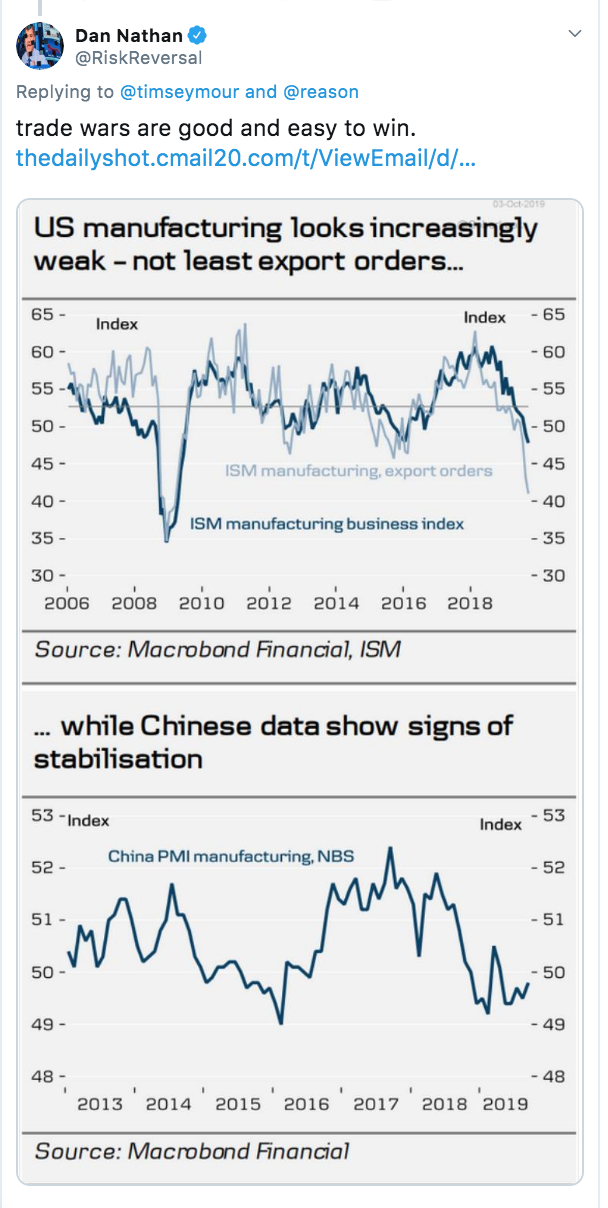 Which brings me to some of the stocks that should benefit from a trade deal and how their price action today far from suggests investors believe what the president tries to sell every time the SPX is down a few percent in a short period.

Let’s focus on farm machinery maker Caterpillar (CAT) that is down 5.5% on the year, actually flat on the day and down 24% from its 52-week highs made a year ago. This chart is one of the worst in the U.S. stock market. The stock since its all-time highs in early 2018 has been in a well-defined downtrend, making a series of lower highs, and dangerously close to re-testing the double bottom low over the last year near $112: 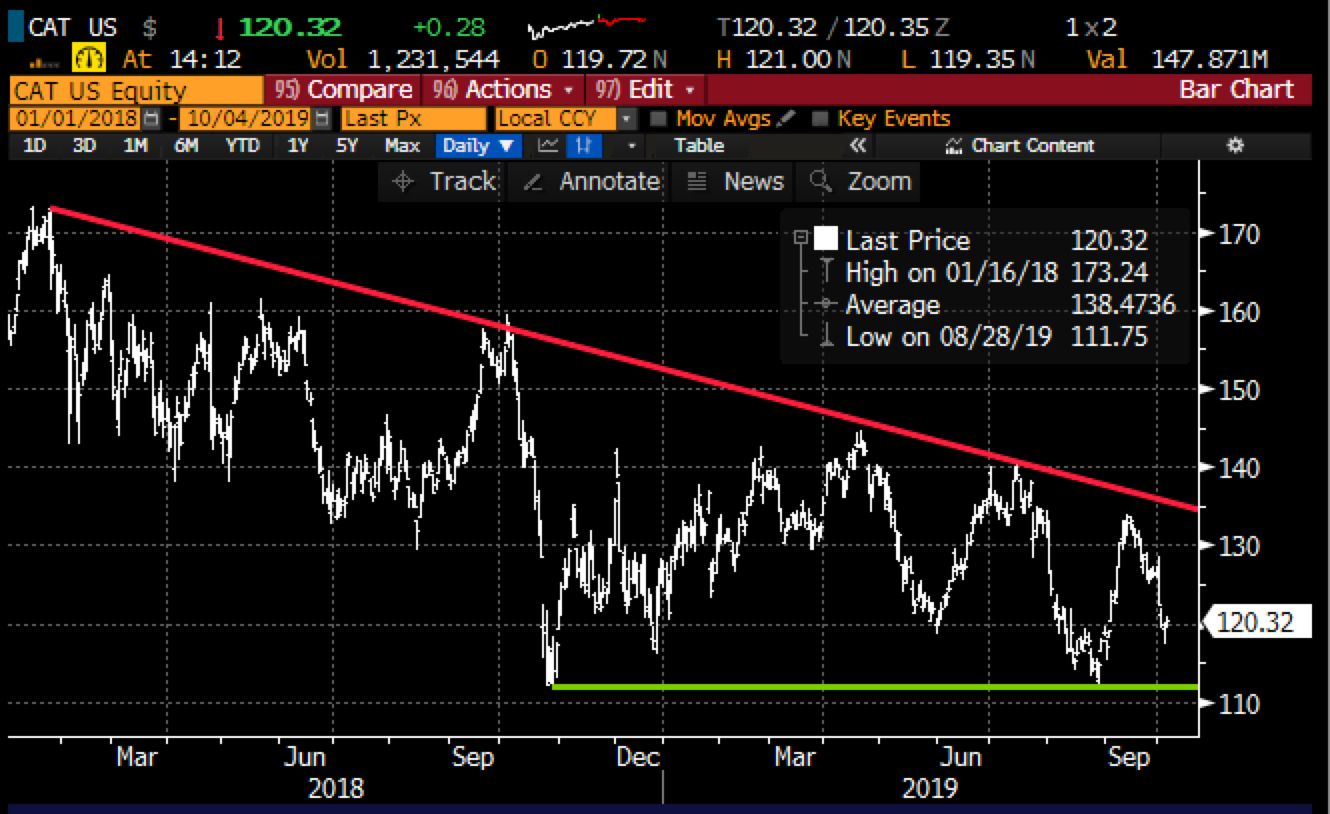 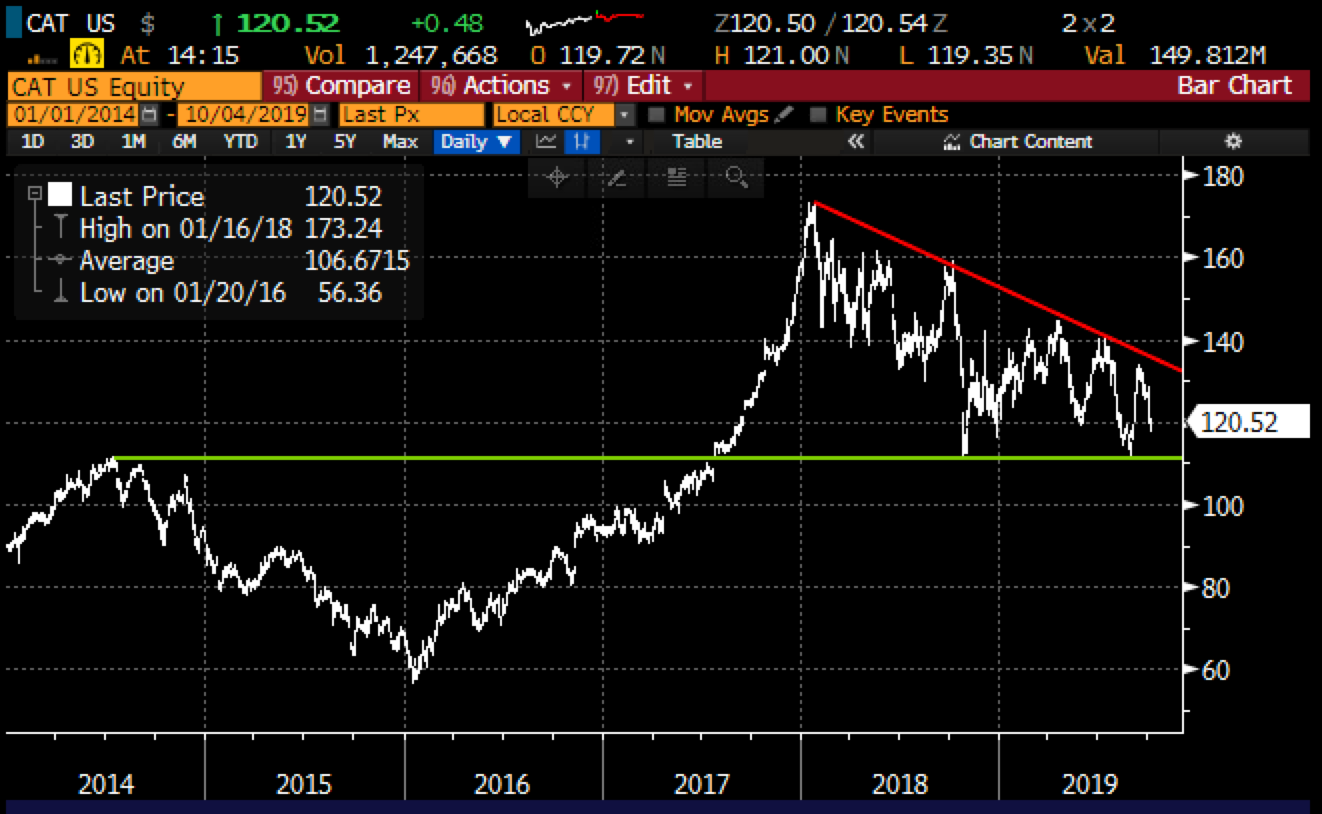 So what’s the trade? The next identifiable catalyst for CAT will be their Q3 results on Oct 23rd. The implied move between now and the close on Oct 25th is about $8 or about 6.5%. Over the last four quarters, the stock has declined the day following each, with an average drop of about 6%.

If I were inclined to play for a post-earnings drop as no real trade deal causes the company to once again guide down, then you might consider a put calendar, selling a shorter dated out of the money put and using the proceeds to buy an out of the money longer-dated put that catches their earnings event… for instance…

This trade performs best with a gradual move towards the 115 strike over the next two weeks into Oct 18th expiration. If the stock is above 115 on Oct 18th expiration the short 115 put will expire worthless and the trade will be left naked long the Oct 25th 115 put. If the stock is close to 115 then the Oct 25th 115 put should have appreciated as it will have picked up deltas. At that point, it might make sense to further reduce the premium at risk by selling a lower strike put in Oct 25th expiration turning the trade into a vertical put spread. The max risk of this trade is $1.20 in premium paid (or ~1% of the stock price), and would be at risk with a large move above the current level, or well below the 115 put strike.