Taking a quick peek at the best performing sector ETFs ytd you get a sense that it is a pretty weird year for the S&P 500 (SPX) which is up 15%, but down about 5% from its all-time highs made in late July.

SO what’s weird Of the four sectors that are outperforming the SPX that are all up at least 20%, two of them are deemed to be defensive, Utilities (XLU) and Consumer Staples (XLP). The other two, Tech (XLK) and Consumer Discretionary (XLY) represent two investor constants throughout this ten year plus bull market, belief that technology is permeating into almost every other sector in the market and that the U.S. consumer is nearly indomitable.

I think it is worth noting that on a day where the SPX is down 2%, one might have thought that a group like staples might outperform a bit, but its largest holding, Proctor & Gamble (PG) at 16.5% of the weight is down 2.7%, and down about 4% from its all-time high made on Monday. Shares of PG are up 2x that of the SPX in 2019, up a whopping 31%, sporting a market cap of $300 billion and up 70% from its  2018 low.  The one year chart of PG shows one of the most orderly uptrends you will ever see, as the stock has gained $100 billion in market cap: 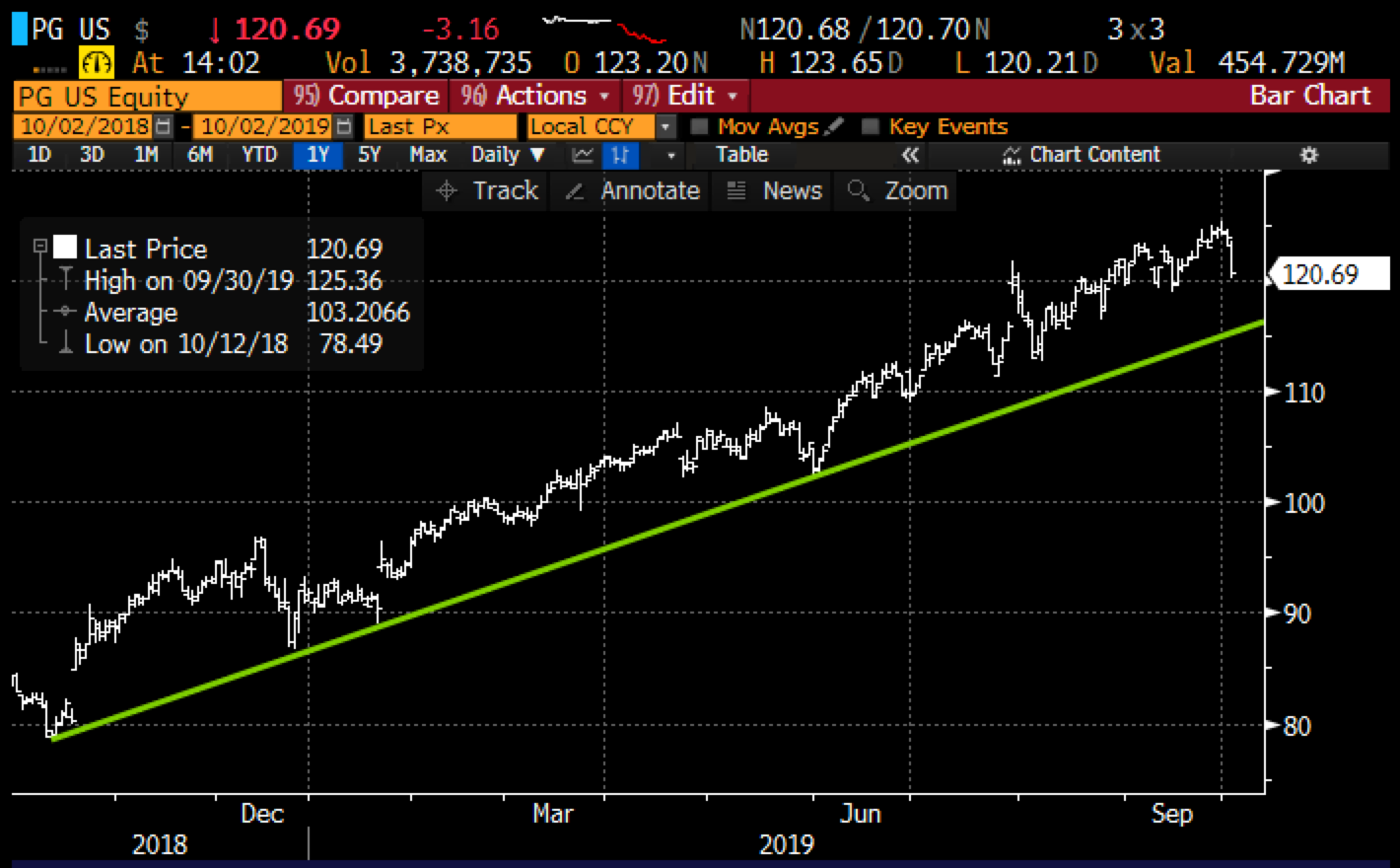 Back in late June, I had some thoughts on PG (read here) when the stock was up 21% on the year:

So why is PG trading at near-record multiple? Quite simply, the stock’s 2.66% dividend yield might look attractive to some vs a 10-year treasury yield at 2% and of course the defensive nature of their products should hold up better in an economic downturn then discretionary items like Nike’s, $5 lattes and Peloton bikes.

for fairly obvious reasons investors are crowding into defensive names like consumer staples, REITs and utilities, pushing their earnings multiples to unsustainable levels giving their growth prospects. Stocks like PG stick out like a sore thumb given their dramatic outperformance, but PG might be damned if we do and damned if we don’t from here. If the U.S. and China were to strike a substantive trade deal, and one of the major headwinds to global growth was removed (low probability this summer in my estimation), then investors might move into more cyclical and growth stocks, and out of stocks like PG. But if the trade war was to intensify and continue to be a headwind to growth, then correlations among stocks in the U.S. would likely go up and in the face of a second-half stock market decline, possibly similar to one of the two we had in 2018, PG would most certainly suffer from these lofty levels.

Since late June a few things have changed, the stock has continued to rise, its PE multiple has also risen as there has not been a bump to earnings expectations, and options prices have also risen. 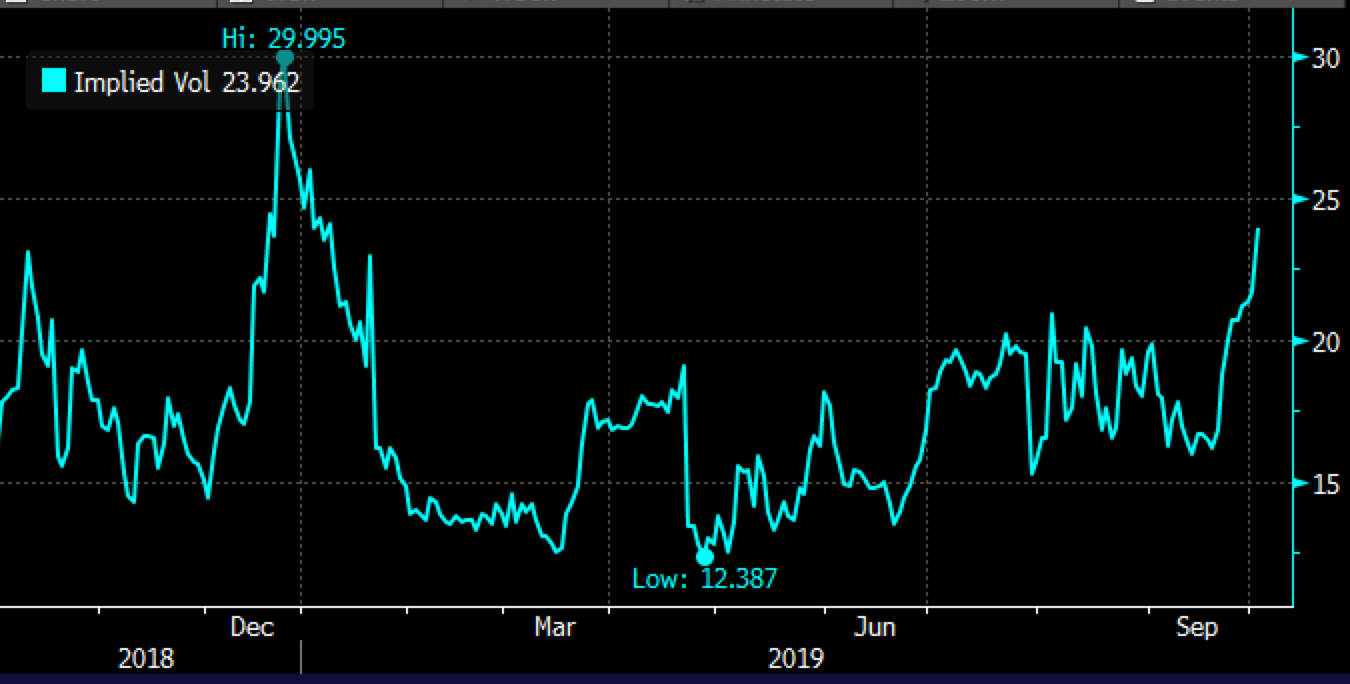 The next identifiable catalyst will be there fiscal Q1 earnings on October 22nd. The options market is implying about a 3.5% move in either direction between now and then and with the stock at $121, the Nov 120 straddle (the call premium + the put premium) is offered at $7.75, or about 6.5% of the stock price which feels kind of expensive.

For comparison sake, 30-day at the money implied vol in the XLP is only 15% and with the etf at $60 the Nov 60 straddle is only offered at $2.60, or about 4.3% of the etf price. If I were inclined to make a near-term bearish bet that investors who have shown a recent disdain for high priced growth might also start to shun high priced slow growth. XLP could re-test its late May lows just above $55 if it were to break the uptrend that has been in place from the December lows: 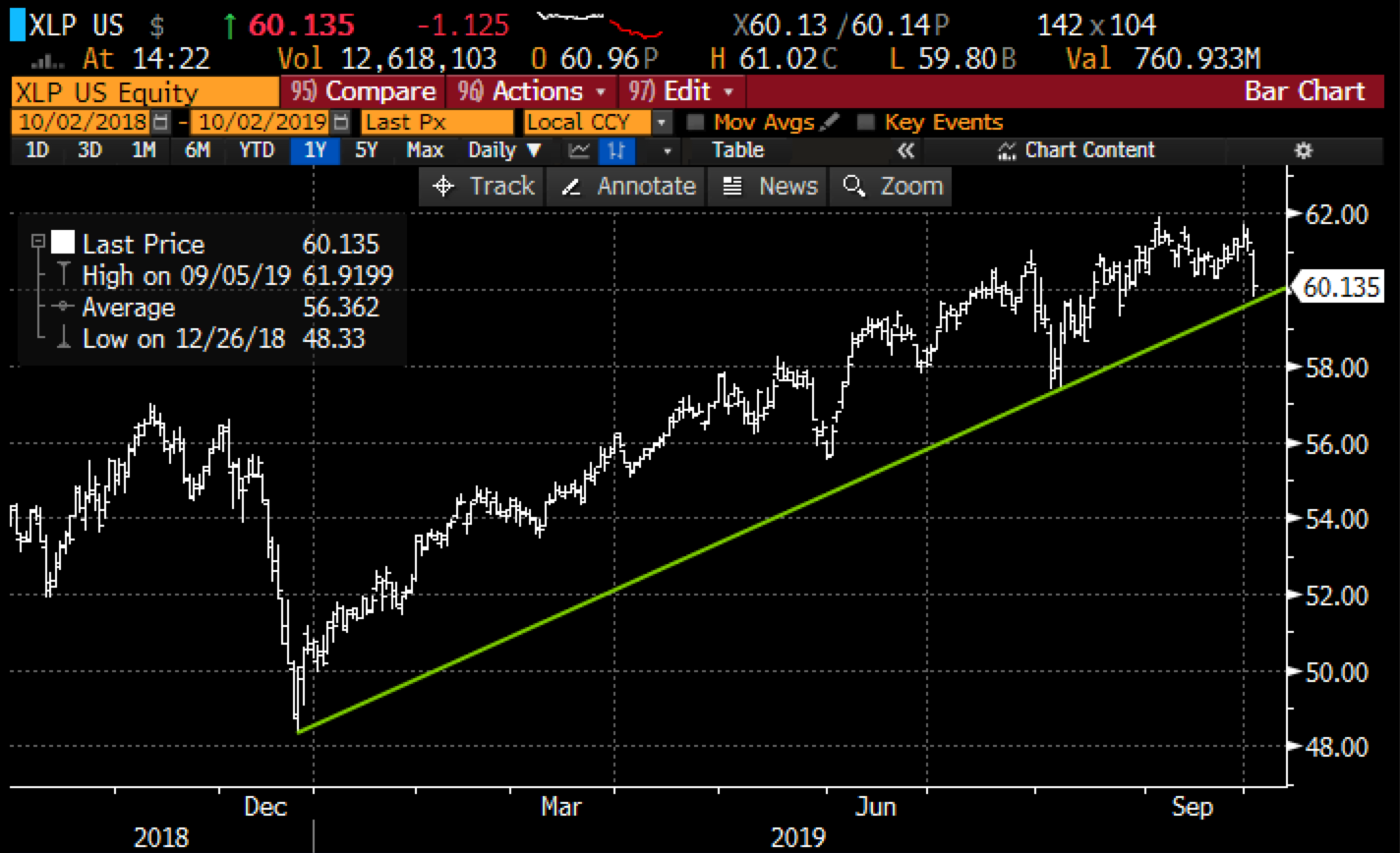 Rationale: this trade breaks even down 1.75%, risks 1.5% of the etf price and has a 3 to 1 potential payout if the etf is down nearly 7% in almost two months.