Last night on CNBC’s Fast Money program we had a quick discussion about bank stocks following a technician who suggested that of late U.S. bank stocks are showing relative strength to the S&P 500 (SPX), watch below:

Regular readers know that I am not a fan of owning bank stocks here given what I feel is slowing global growth which is leading central banks the world over to lower interest rates (including our Fed), causing yield curves to invert while racking up Trillions in negative-yielding debt. The underperformance of almost every bank stock in the U.S. (save JPM) over the last 18 months or so, makes it abundantly clear that investors do not like this set up for bank profitability despite very cheap valuations and increased capital returns.

My view as articulated last night is fairly simple… the worse the impeachment inquiry gets for trump, the more likely he will need to shore up his economic message, basically saying to his base, ignore the “fake witch hunt” and focus on the strong economy and stock market”. A big part of that message is blaming the U.S. Fed as partisan, pressuring them to lower rates (which has worked so far in 2019) while also setting them up as a scapegoat on the campaign trail in 2020. This behavior will continue to put downward pressure on rates in the U.S. and I don’t think it will have the intended stimulative effect and ultimately weigh on bank profitability.

You might also have the double whammy that the more attention this impeachment inquiry gets the more it weighs on (for now) Dem front runner Joe Biden’s candidacy at the same time real economic populist Elizabeth Warren is rising in the polls. The concern investors should have about Warren as the front running candidate is that her message for much of the next 9 months (maybe at least 14 months) is that she keeps hitting the banks as predatory and proposing new regulations if she were elected president. This would also weigh on bank stocks.

If you agree with this line of thinking then as I mentioned in the clip you want to focus on the bad banks, specifically the investment banks like Morgan Stanley (MS) and Goldman Sachs (GS) which are still down 25% or so from their January 2018 highs, while the SPX is just a smidge from its recent highs, or Wells Fargo (WFC) the money-center that has often been the center of Senator Warren’s focus on the regulatory front given the years of scandals that have left the company with billions in fines, restrictions and an interim CEO.

For this post, let’s focus on WFC as there is just so much bad and so little good going on from my perspective and if Warren were to become the Dem front runner, WFC might become her political pinata.

WFC is down 26% from its Jan 2018 high. I think it is safe to say that the stock is at a fairly critical spot on the chart, having broken out in the last month above the downtrend that has been in place since Jan 2018, it has paused just below its July high: 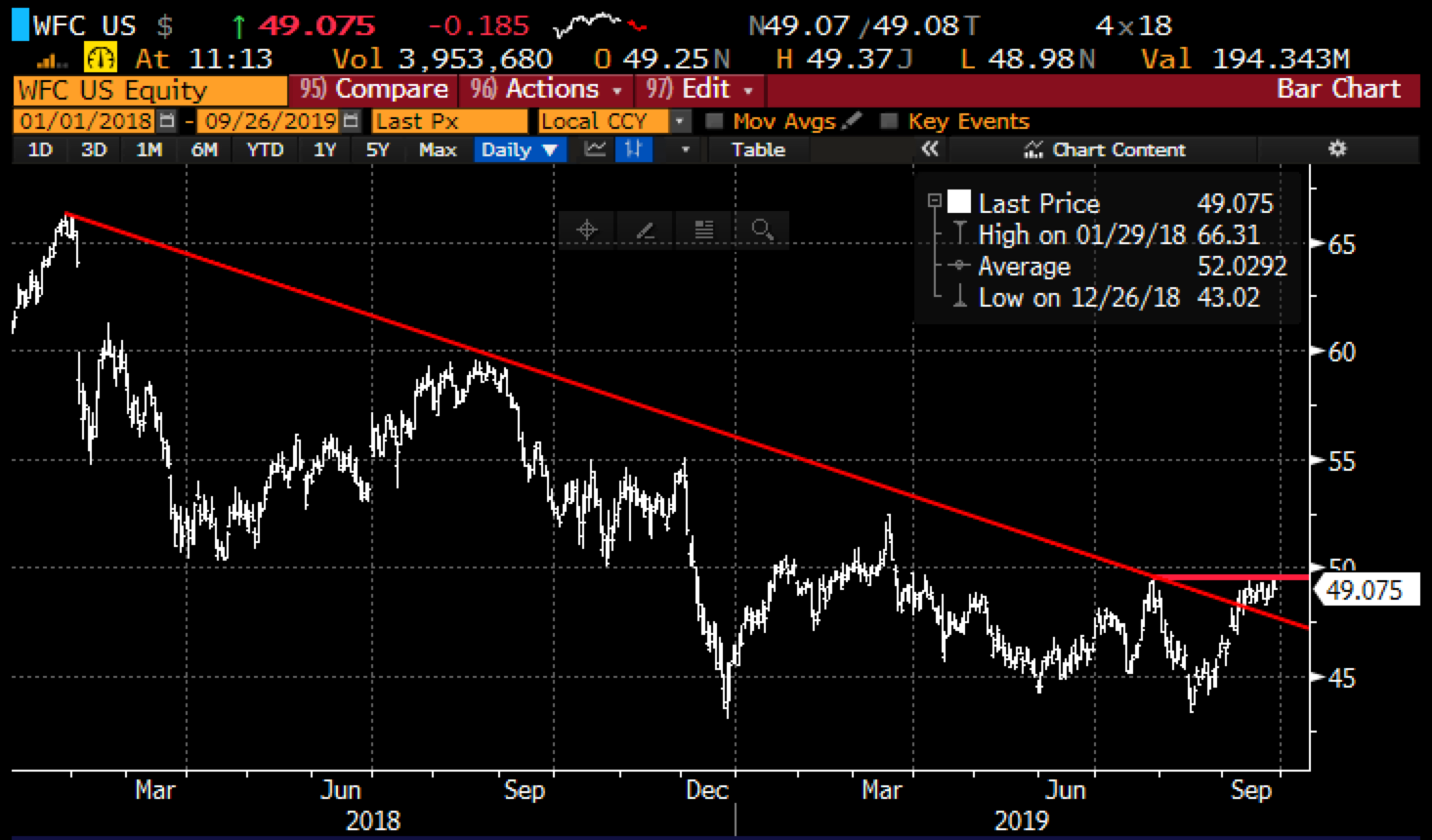 Stretching it out a bit to the ten-year chart and you see the stock’s recent bounce from the low $40s matched it’s December 2018 low and it’s September 2016 low. A rejection near the downtrend and a retest and break of the prior lows could easily yield a stock in the high to mid $30s: 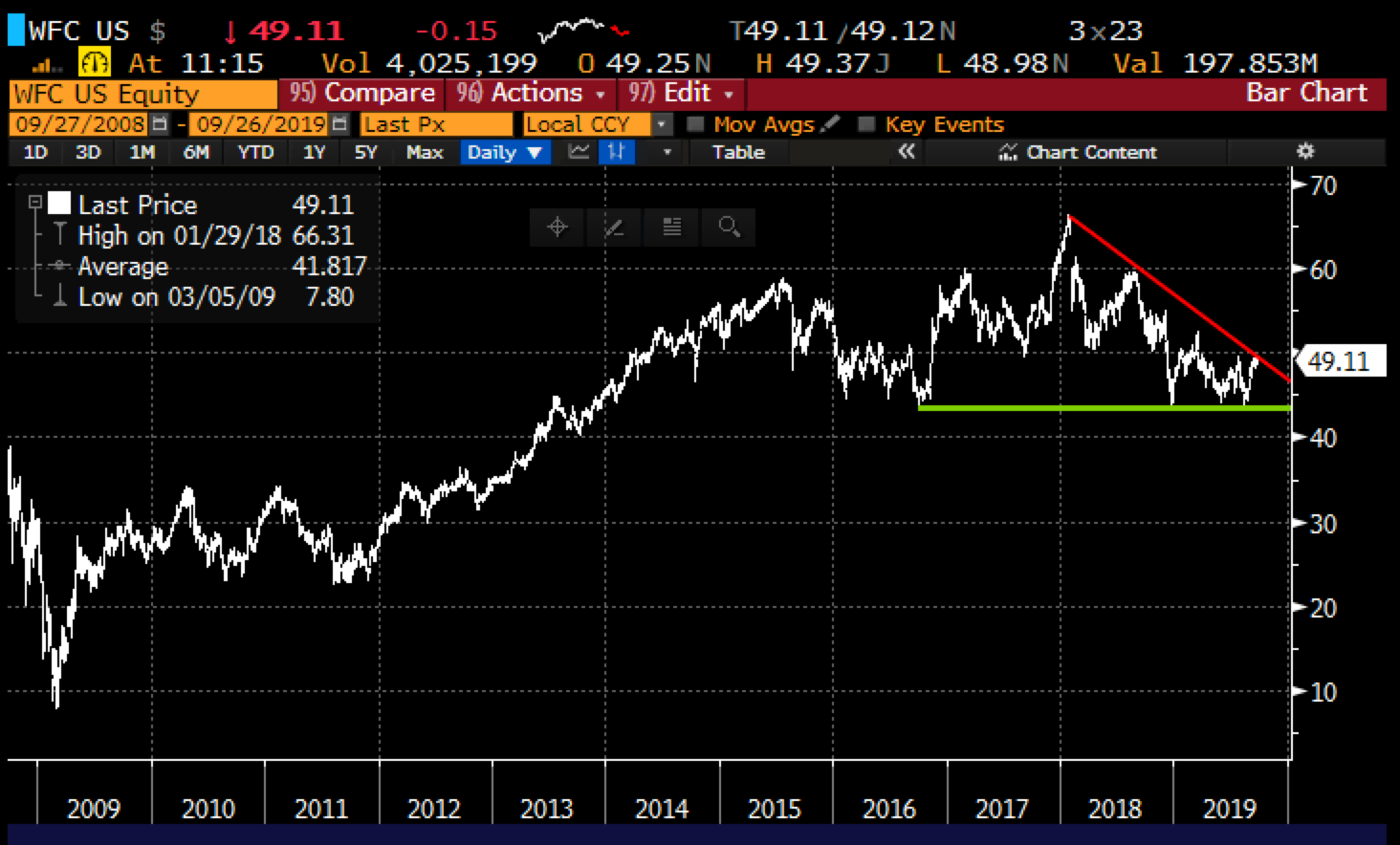 So what’s the trade? The next identifiable catalyst for the stock will be there Q3 earnings due on October 15th before the open. The options market is implying right now about a $2.25 move in either direction between now and the close on Oct 18th, or about 4.5%. That seems fairly cheap for those willing to pick a direction, for instance with the stock at $49.05 the Oct 18th 49 put is offered at $1.05, for a break-even down at 47.95, down about half the implied move, or 2.2%. The flip side is also true for calls for those who think the stock could breakout, but I think you know where I stand.

With options so cheap, it does not make sense to start with a vertical spread. I would look to spread on a move in your direction. For instance, let say you wanted to target the recent lows, and you wanted to buy the Oct 49/45 put spread, you might only get 15 cents for the Oct 45 puts…while there is a low probability they will be in the money (options suggest just a 10% chance) they just don’t do much for you merely offsetting 10% of the premium of the at the money put you are buying.