Yesterday after the close Adobe Systems (ADBE) reported FQ3 results that were better than expected, per Barron’s Online:

Adobe posted revenue of $2.3 billion, up 24% from a year earlier, a hair ahead of Wall Street’s expectations for $2.82 billion, and slightly ahead of the company’s own forecast of $2.80 billion.Non-GAAP profits in the quarter were $2.05 a share, ahead of both the Street’s view at $1.97 and the company’s guidance at $1.95. Profits under generally accepted accounting principles were $1.61 a share, ahead of the $1.40 management had told investors to expect.

The company said revenue from its digital-media segment was $1.96 billion, up 22% year over year. The digital-experience segment yielded revenue of $821 million, up 34%.

But offered guidance for the current quarter that was disappointing,

Guidance for the fourth quarter was less upbeat than expected. Adobe is projecting November-quarter revenue of $2.97 billion with profits of $2.25 on a non-GAAP basis, or $1.68 under GAAP. The Street consensus has been for $3.03 billion and $2.30 a share in non-GAAP profits.

The company sees growth slipping to 20% in the digital-media segment and 23% in digital experience.

It is worth noting that in an interview with Barron’s, ADBE CFO John Murphy specifically stated: “the company is not seeing any impact from macro slowness on its business”. I suspect “slowness ” will be more evident in new bookings than renewals if and when we ever see a decline in enterprise software spending.

The stock was initially up in the aftermarket, despite the weak forward guidance, but weakened during the conference call and opened down 3% today and spend most of the day at these levels.

Despite being a stock market darling over the last few years, ADBE’s year to date gains of 22% is essentially inline with the ytd gains of the Nasdaq. Wall Street analysts are generally bullish on the stock with 19 Buy ratings, 11 Holds and no Sells,  but it is worth noting that enterprise cloud peer Salesforce.com (CRM) which has a nearly identical $133 billion market cap, which is only up 10% on the year has 39 Buy ratings, 3 Holds and No Sells. One issue investors are dealing within the space is decelerating eps and sales growth despite high valuations. For instance, ADBE’s 2019 eps is expected to rise 16% yoy, which is a massive deceleration from the 57% growth in 2018 and the 43% growth in 2017 with sales expected to grow 24% in FY 2019 on their way down to 18% next year. Shares of ADBE trade 35x 2019 eps and 28.5x expected 2020 eps and a whopping 12x 2019 sales and 10x expected 2020. These are the sorts of multiples one might expect for much smaller companies.

As for the chart, late last month the stock broke the uptrend that had been in place since the December lows, but found a bit of support this morning at its 200-day moving average at $270: 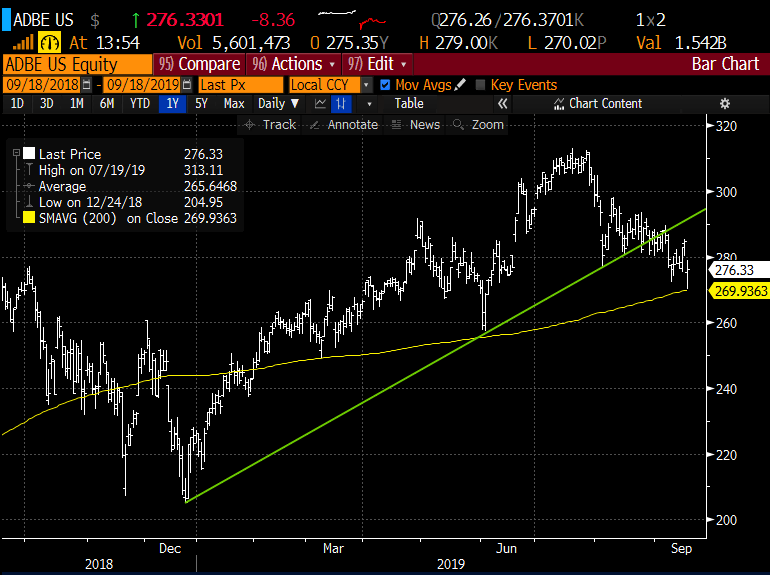 As for the stock market darling status referenced above, the stock has been a monster since 2016 when it crossed $100 for its first time in Q3 and then found that level to be a launchpad late that year. The stock appears to have decent near term support at the intersection of the uptrend since early 2017 and the 2019 low: 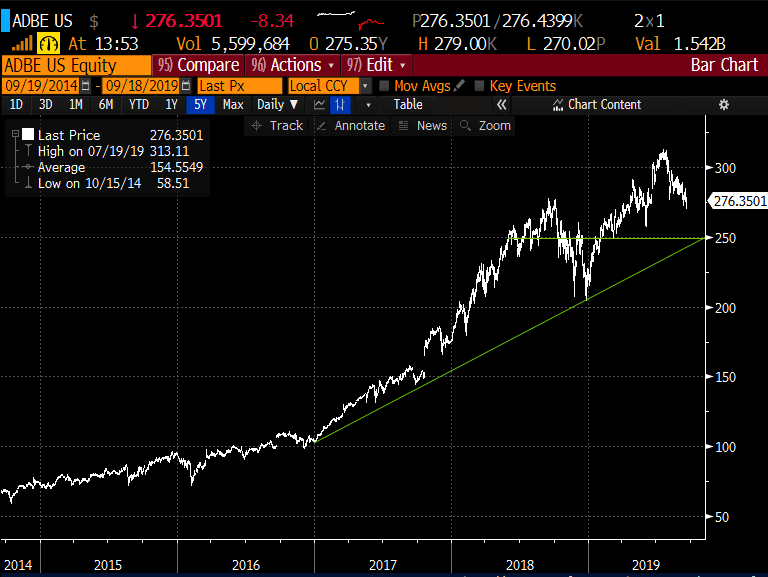 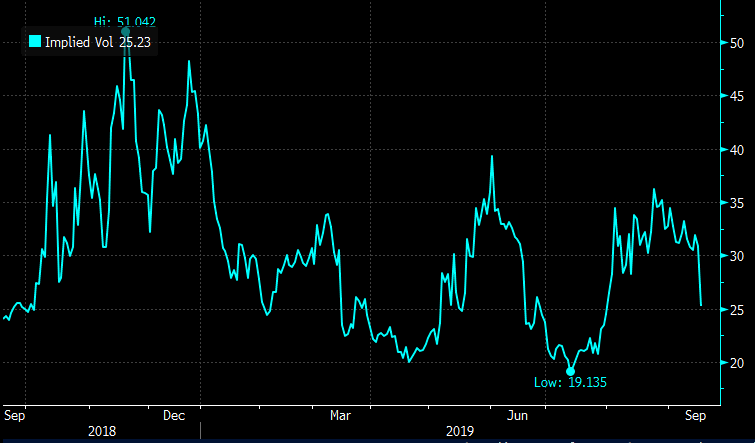 So what’s the trade? If I were inclined to play for a retest of the $250 as the forward guidance and a rotation out of expensive growth continues into value then I might consider the following put spread:

Rationale: this trade idea risks 2.8% of the stock price to make a bearish bet that breaks-even down 3.2% and allows for up to 8% gains of the stock over the next two months if the stock is down 11.55%.