So far the year of the “Unicorn Exit” for private tech companies has been a bit of a mixed bag. We have spent some time on air on Fast Money of late as it seems that investors are balking at The We Company’s (formally WeWork) valuation in front of an expected IPO, and the company’s corporate governance, with some reports that they may even shelve the deal for now. We discussed on Friday’s Fast Money program on CNBC:

The WSJ has been all over the story, last week suggesting that the company may seek an IPO valuation between $20 and $30 billion below their last private round valuation at $47 billion and last night suggesting it could be at the low end of that range:

WeWork’s parent is eyeing a valuation for its initial public offering that could fall below $20 billion as some existing investors push the workspace company to shelve the planned offering, people familiar with the matter said.

Despite plans to begin a roadshow to market the shares to new investors as early as Monday, We Co. and its underwriters are planning to hold meetings this week among themselves and with investors to figure out what changes may be needed to help garner enough demand for an IPO, the people said.

I suspect where this deal comes, or whether it comes at all might speak to investors sentiment as we head into the last quarter of the year, a year that has seen more than $150 billion of tech IPOs so far all of them money-losing, all of them extremely expensive. But it has been a tale of two cities, but for the most part, the two most high profile and largest have struggled mightily

ZS reports their fiscal Q4 results Tuesday after the close. The options market is implying about a 14% one day move Wednesday in either direction which is basically inline with the average one day move over the last five quarters since going public.

The chart since its IPO shows the stock’s massive breakout this year, and the recent break of the trend, now approaching its 200-day moving average which some traders might suggest could be technical support: 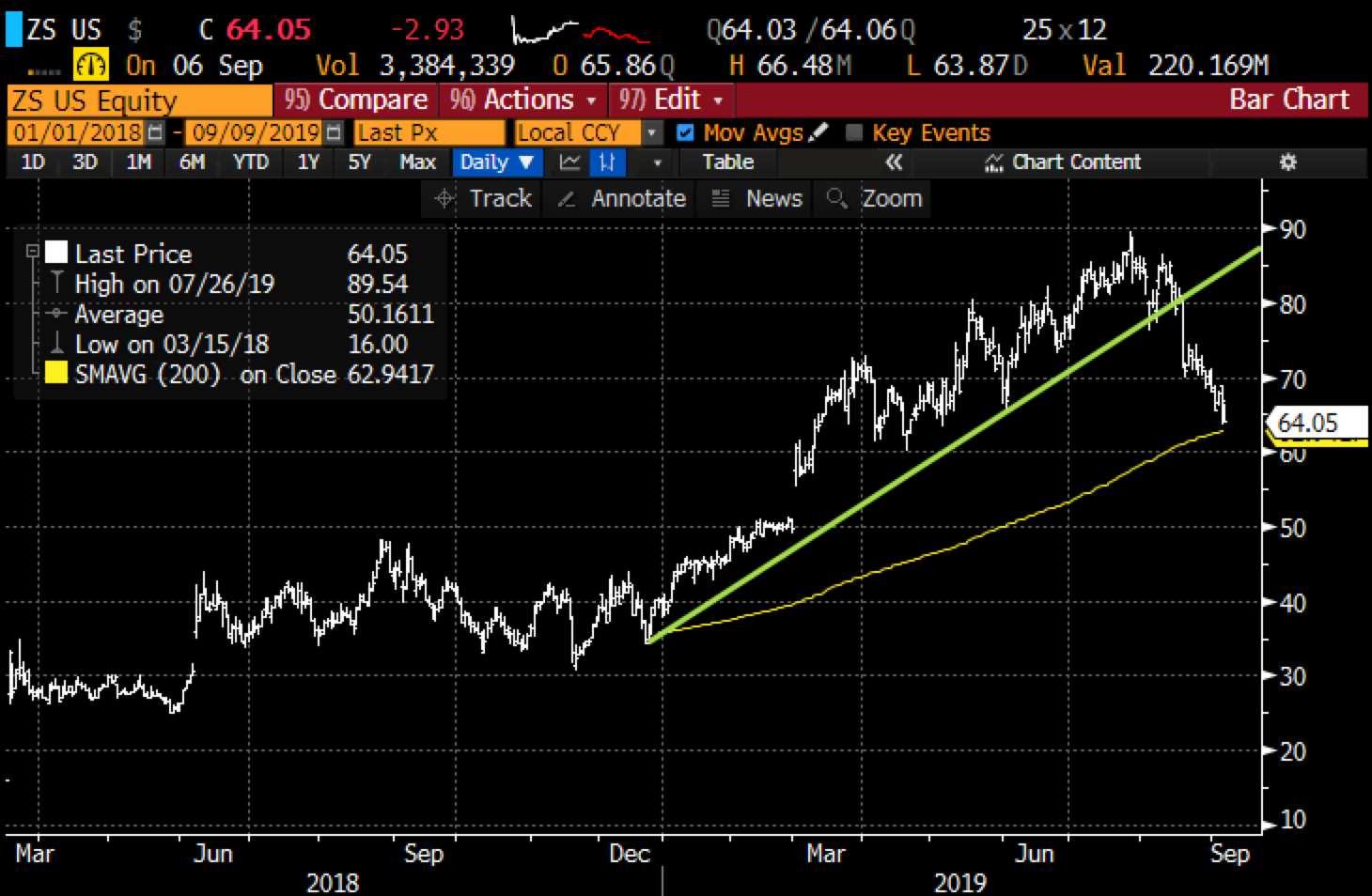 SO why all this talk about recent IPOs that trade badly, or older ones that trade at unsustainable valuations, or ones that might take a material cut just to go public or don’t come at all? Well, it is simple, we have never seen so many companies, with losses so great, with no real path to profitability insight, raise so much money in the private markets (both debt and equity). Central banks experiment with zero interest rates has helped cause this investment bubble. Investors were desperate for returns. In past cycles that meant investing in hedge funds, in this cycle, it means private markets. Funds like Softbank were able to raise what will likely be hundreds of billions of dollars from Sovereign Wealth Funds and Pension Funds. Mega Funds outsized and distorted prior Venture Capital norms and have created pockets of risk that might bot be too liquid or might be valued at their heights prior to becoming liquid in public markets. In troubled market times, investors may end up raising capital where they can, and that might mean liquid public names…

So from where I sit, It makes sense to keep track of these stocks to get a sense for investor appetites for these issues both public and private, there are some very important financial institutions that have vested interests in these deals going well, and if market history has shown us anything is that when the IT story of the run-up starts to fail, the broad market usually follows. As I said in the clip from Friday, shelving a WE deal might just be one less thing for public markets to worry about… but who knows what the knock-on effects will be of the company’s inability to raise fresh capital, will investors locked up in large venture funds who will be forced to market down their investments by 50% look to raise cash where they can if we find ourselves in a situation where markets were careening like the last Q4? I guess the main takeaway here is simple, you have heard of the much-touted consumer tech names, you use many of their products, but keep an eye on some of the SaaS and Security darlings whose IPOs were massive outperformers but for now trade at redic multiples, their precipitous declines might end up saying more about investor sentiment than the deals that were born into a grave.