MAGA, you know, Microsoft (MSFT), Apple (AAPL), Alphabet (GOOGL) and Amazon (AMZN), the four largest publicly traded stocks on the planet, equal to $3.7 trillion in market cap, or nearly 50% of the market cap of the Nasdaq 100 index’s etf, the QQQ.

Taking a quick look at the performance of late of these four stocks and you see some fairly divergent performance since Q2 results. MSFT has been a monster this summer, holding the uptrend from the Dec lows, and holding above $130, the early June breakout level like a boss: 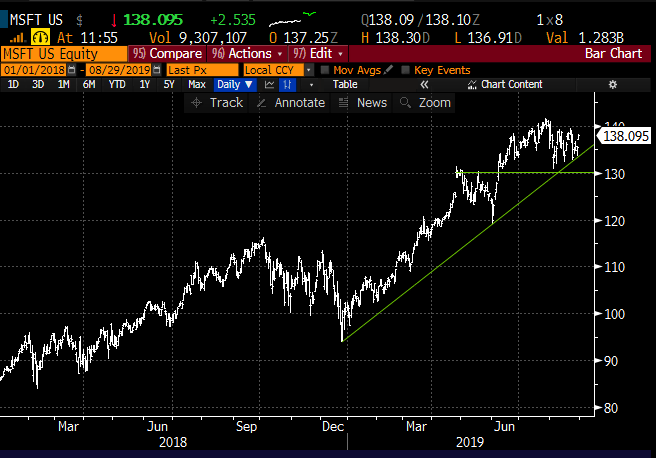 But I would say the Jury is still out, at least from a technical perspective on the rest of MAGA.

AAPL is clearly at the eye of the trade war storm, and that situation remains clear as mud. But it is worth noting that its post-earnings gap near $220 on July 31st should serve as considerable near-term technical resistance, while also noting the stock has not confirmed any of the new highs in the S&P 500 (SPX) in 2019: 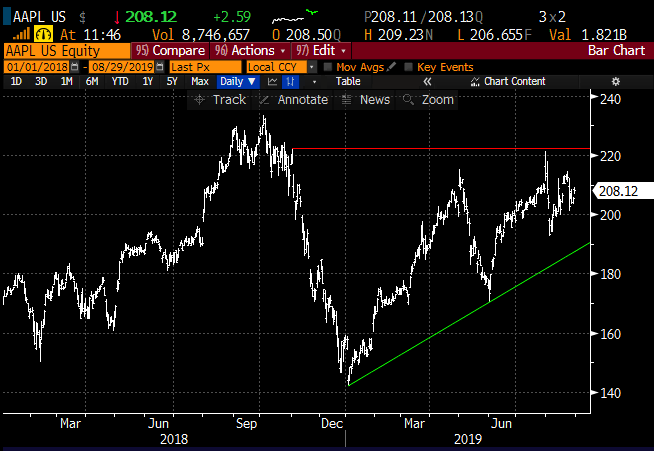 GOOGL also faces near term resistance at its post Q2 earnings gap from last month near $1270: 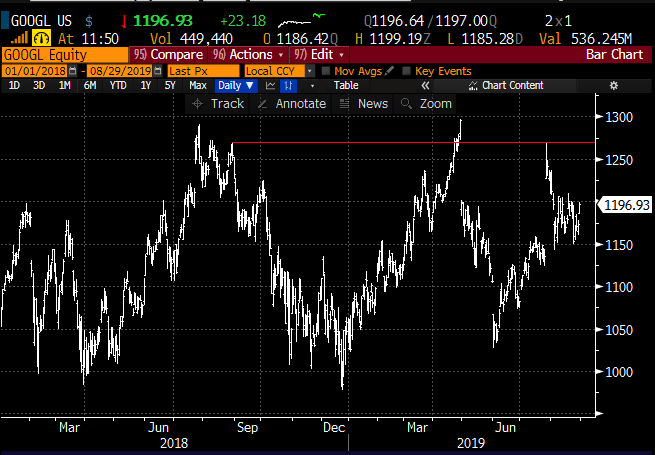 And then there is AMZN, which has a decidedly different look to the other three… the only one below the uptrend from the December lows, and down 11% from last month’s highs, and has not confirmed any of the new highs in the SPX: 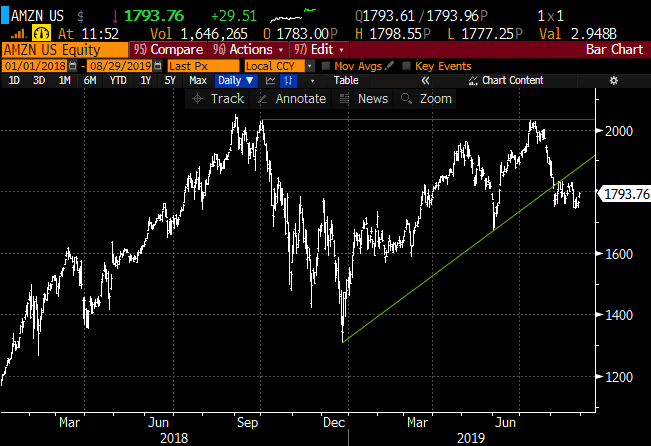 If the NDX/QQQ is going to break out to new highs this fall, I suspect it will be led my MSFT, and for the index to establish a new range above the prior highs will need the help of the rest of MAGA. The chart of the QQQ below shows the etf precariously holding the uptrend from the Dec lows, and resistance just above the prior highs near $197: 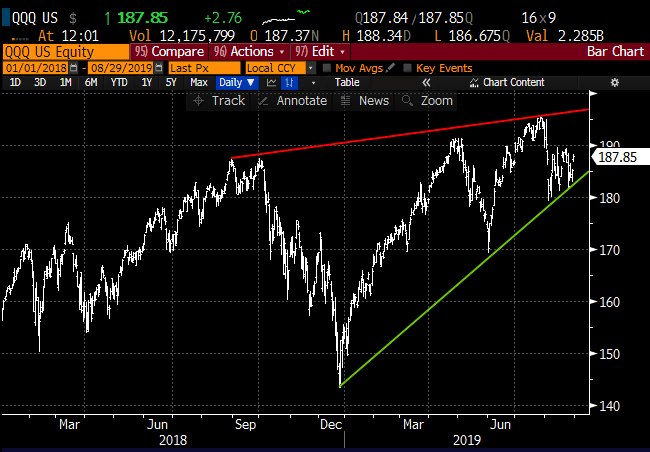 Again, MSFT can’t be the only one to drag the Nasdaq 100 to a new high, it will take the rest of MAGA to join the party.

So what’s the trade? I suspect AMZN continues to trade sloppily until sentiment gets too bad and then the stock makes a run into the holiday season, but who knows from where, the stock is broken for now, and the sentiment, at least sell-side remains way too positive with 54 Buy ratings, 2 Holds and NO Sells. In a stable to the rising market, there is no reason why AAPL and GOOGL should not re-test their post-earnings gaps, but new highs will be a function of sentiment regarding a trade deal in 2019. So I’d just focus on MSFT and its relative strength of late. Short-dated options prices seem reasonable to cheap, and offer and attractive way to play with defined risk with 30-day at the money implied volatility a 22% (blue line below) vs 30-day realized volatility (how much the stock has been moving, the white line below) at 27%: 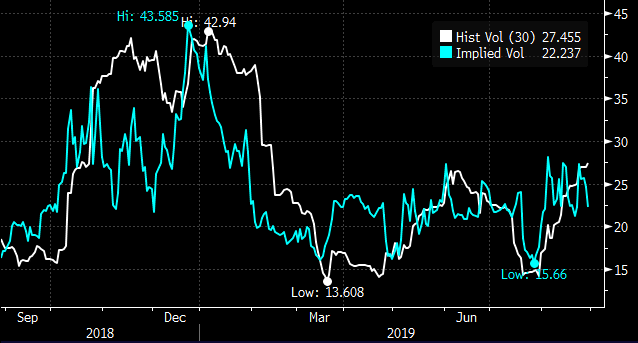 The next identifiable catalyst for MSFT will be their fiscal Q1 results due out the last week of October, but in the meantime targeting a breakout to new highs with defined risk make sense for those who think the Nasdaq which is down a little less than 1% on the quarter makes a push into the end of Sept. (regular readers know that I think the potential for a marginal new high is possibly but not expecting a new range above the prior highs before we get a meaningful pullback and substantive resolution to our global trade dispute, which is likely a 2021 thing):

Rationale: this trade idea risks 2% of the stock price with a break-even up 1% from the prior all-time high and offers a 5% return on the stock if MSFT is up 8.5% by October expiration.

I much prefer this trade idea to buying stock for a breakout in the next six weeks as it offers a potential payout of 2.3 to the premium at risk with defined risk. Why the cautious optimism, this stock is up 36% YTD, and sports a market cap of $1.05 trillion, if for any reason investors are looking to raise cash quickly in a market meltdown, MSFT could be the piggy-bank to the big-money world as we head into the end of many mutual fund’s fiscal year ends in Oct and Nov.