It is a bit of an understatement to suggest that retail stocks in the U.S. are a bit of a mixed shopping bag so to speak. Big Box Retailers like Walmart (WMT), The Home Depot (HD), Target (TGT) and Costco (COST) all trade within a few percent from their all-time highs made last month, while the equally weighted S&P Retail etf, the XRT is down 26% from its 52-week and all-time high made a year ago this week. The chart below shows a series of lower highs and the very recent new multi-year low: 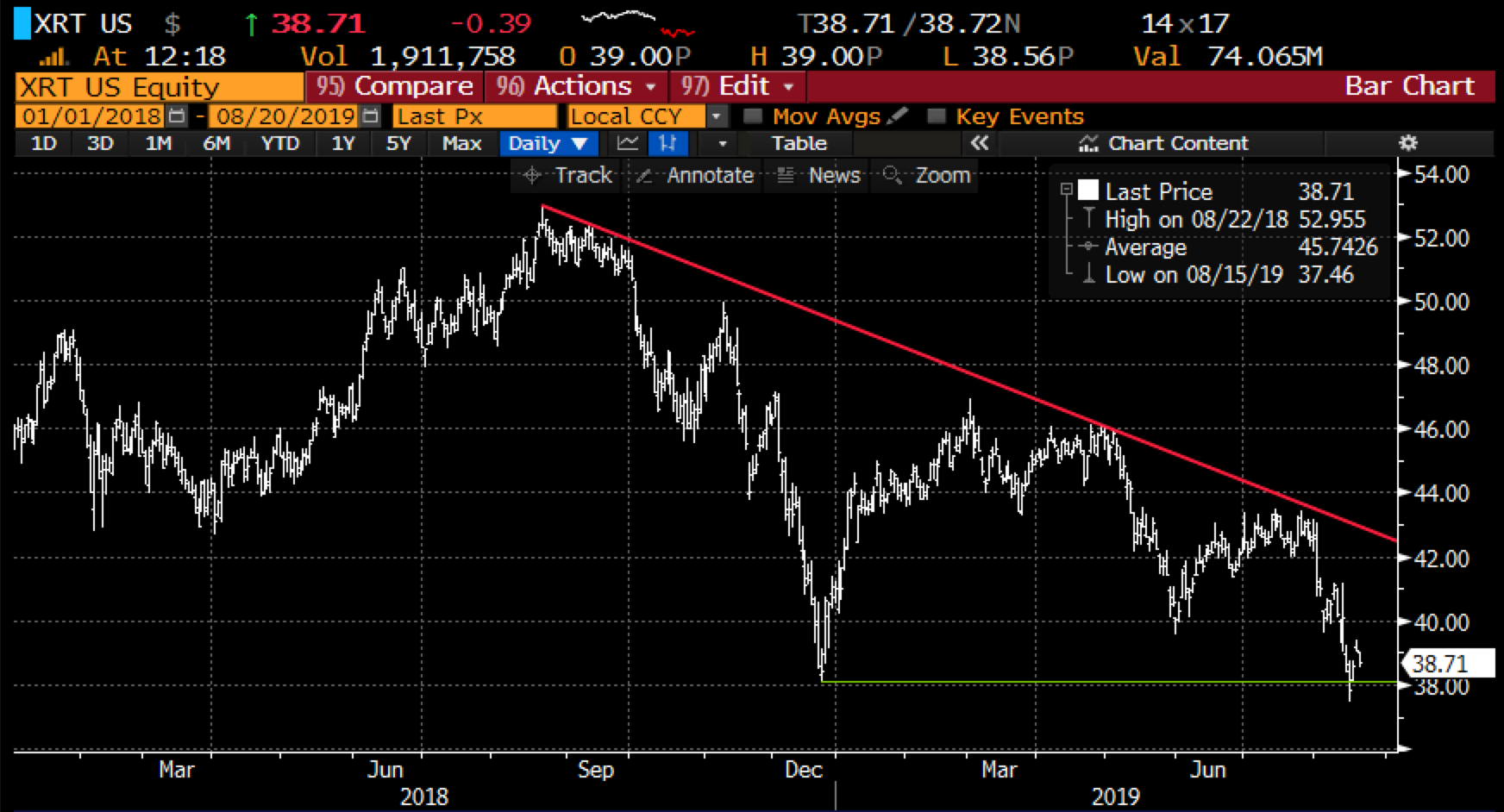 The chart since the start of 2018 above does not fully tell the story of just how horrible the price action has been for the latest leg of the bull market in the U.S. and the etf is testing support dating back to mid-2013: 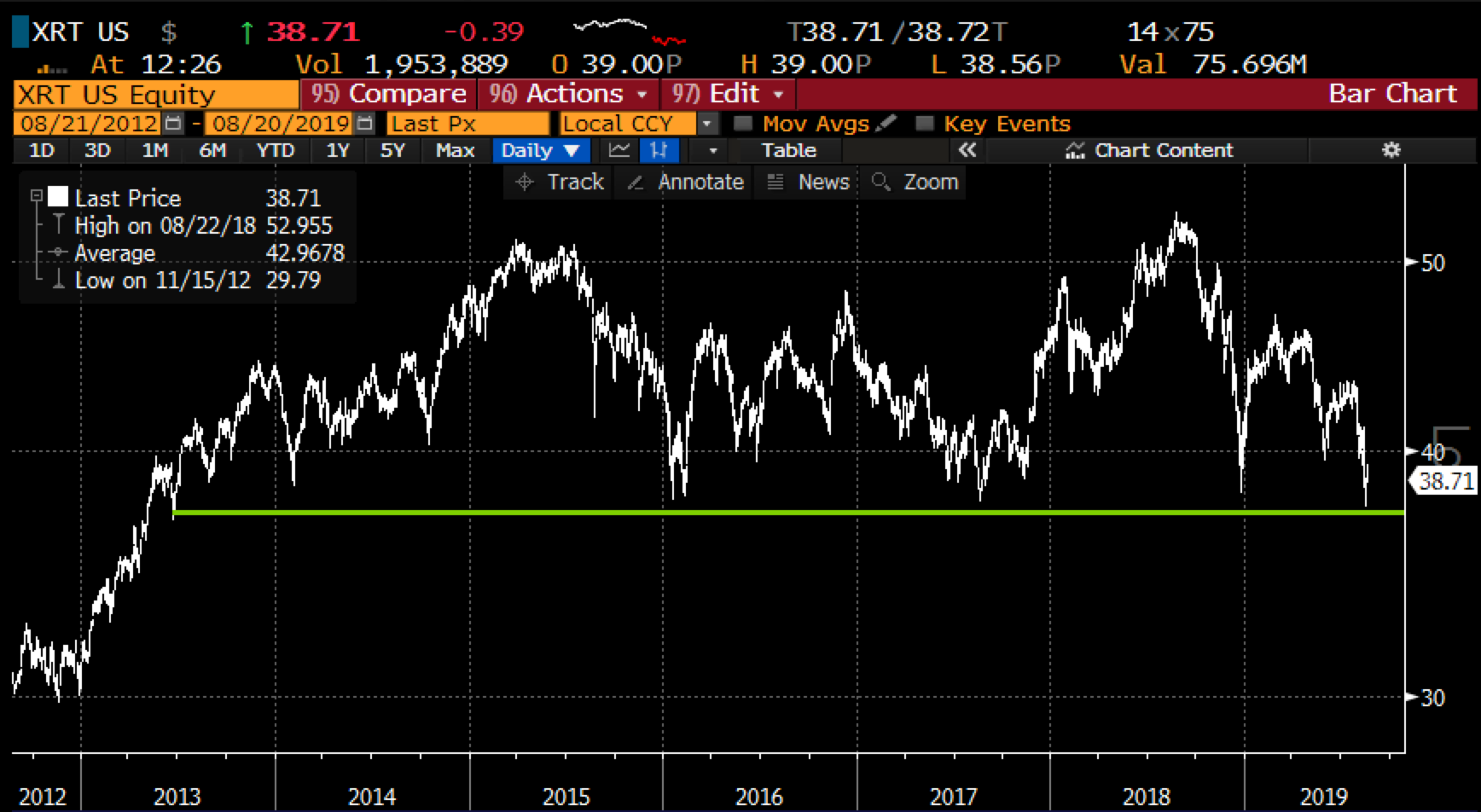 So without going into too much detail about the U.S.’s “over-stored” situation relative to most other developed countries (read here), and despite the fact that Amazon.com is viewed as their massive bogey-man for bricks and mortar retail (they only account for about 5% of our total retail sales), there is an unshakable belief among investors in retail stocks are an endangered species.

I would also add that the popular belief that the U.S. consumer is strong because of some retail sales data and consumer confidence data reported last week, its safe to say these are backward-looking…

First the retail sales, they have basically been plus or minus 2% from the last twenty years except for the recessions in the early 2000s and 2009: 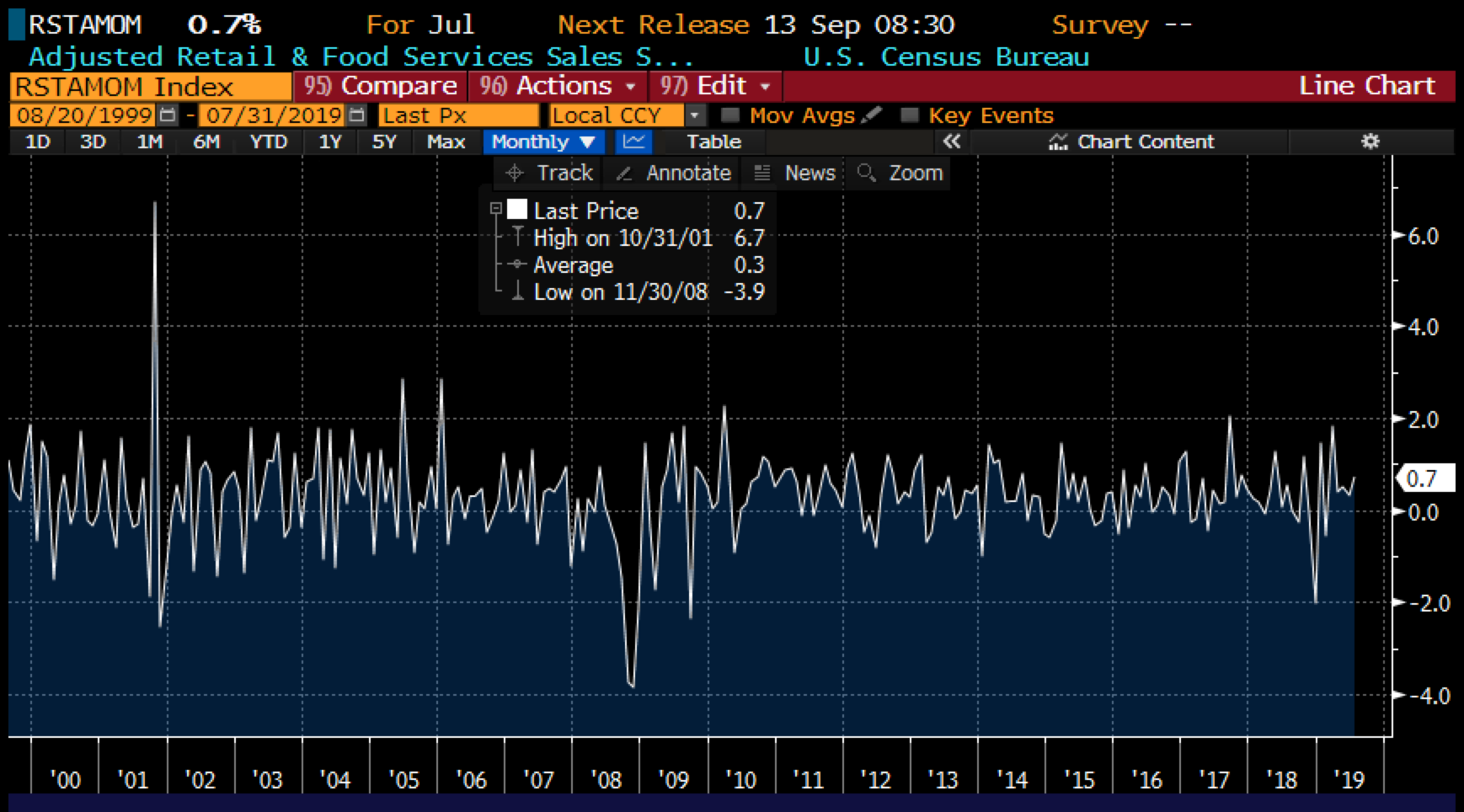 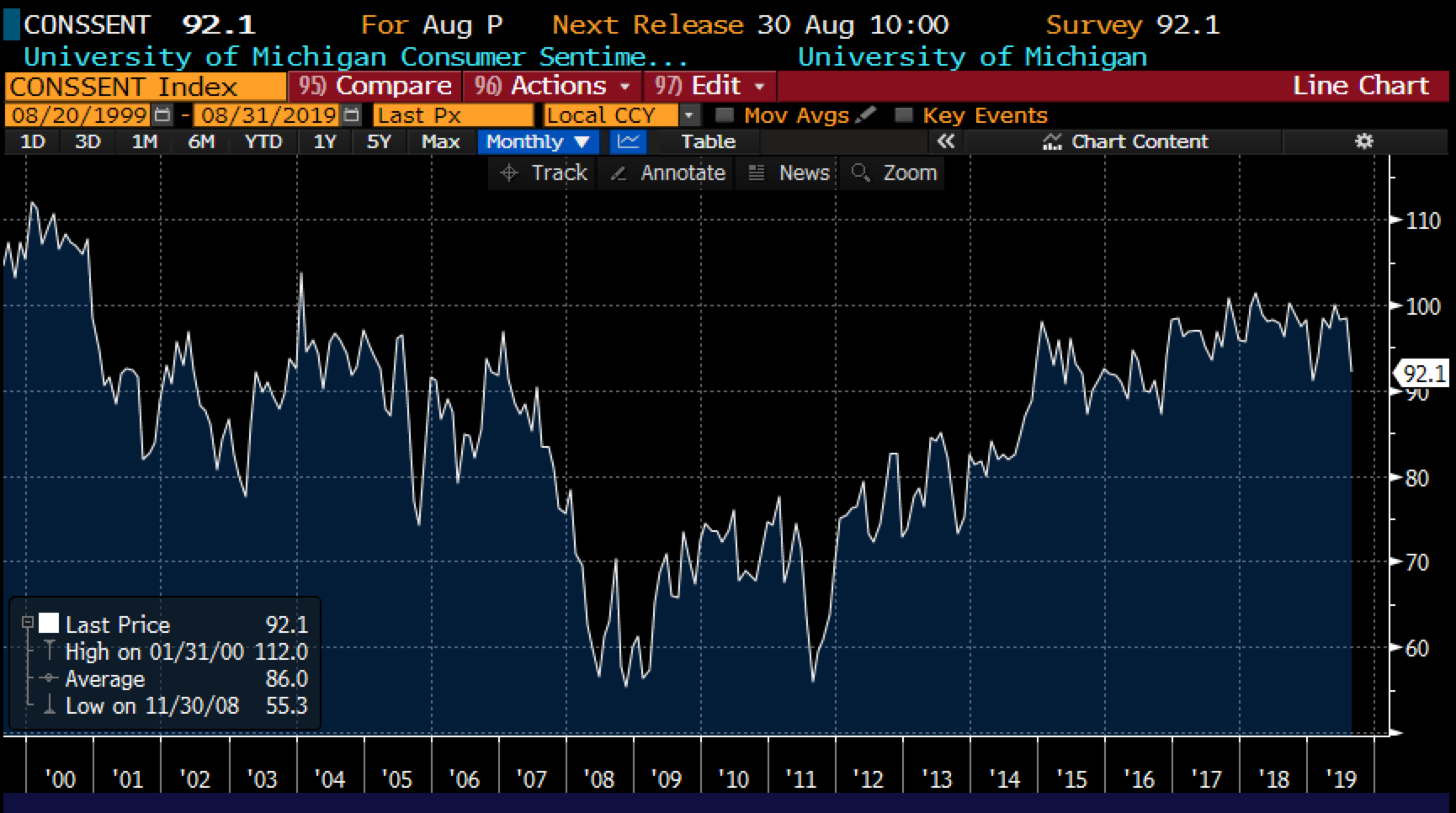 And lastly this one of the Conference Board of Consumer confidence… U.S. consumers are always confident prior to market tops and recessions, and then they are not: 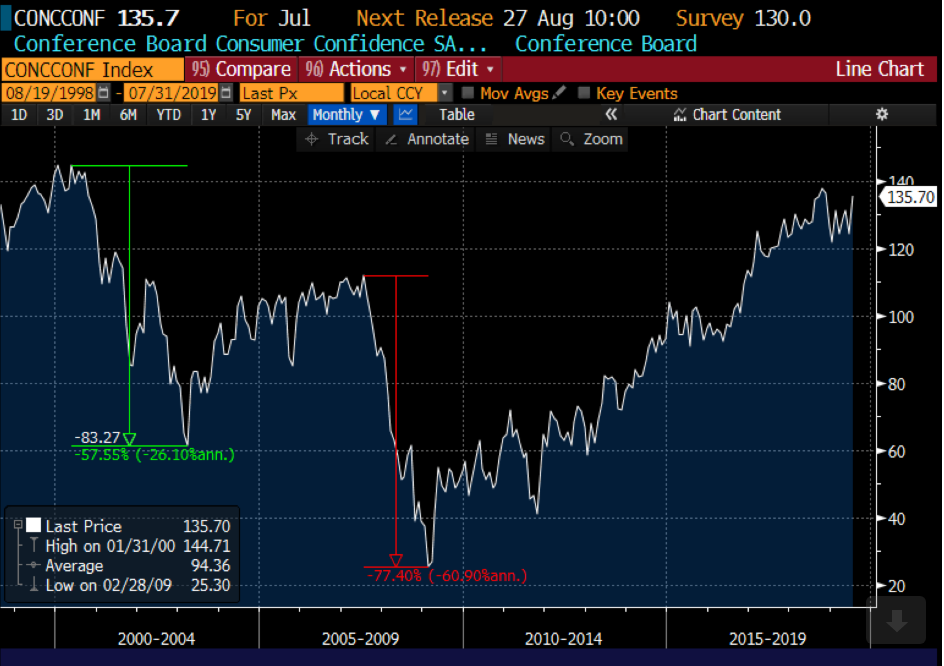 And here is the kicker, 70% of our countries’ GDP is consumer-led, and I keep hearing how strong the U.S. consumer is, on an absolute basis but also relative to trouble spots all over the world, most notably Europe and China, yet it is our consumption does not seem to be the product of a strong economy as the trump admin might have you believe but a fragile economy that has benefitted from very accommodative fiscal policy over the last two years, and with the entrance of trump’s trade war, now once again easy monetary policy. If there is no quick fix and truce that includes reducting our tariffs, then ultimately our farmers, manufacturers and eventually our consumers will feel the pinch, and many of our zombie retailers will sadly go down with the ship.

But in the meantime, despite the strength of WMT, HD and COST, the rest of the space on an equal weight basis is sinking. Back in late March, I made the case why retail stocks would test current levels (Consumer Doomer) when the XRT was $45, with no bounce despite good results in the last week from WMT and HD, the etf looks like it will finally break below long term support?

So what’s the trade? I hate pressing lows, but short-dated options prices in the XRT are fairly reasonable with 30-day at the money implied volatility at 22% (blue line below), actually below 30-day realized volatility, the white line below, how much the etf has been moving) at 25%, making long premium directional trades look attractive for those looking to define their risk, options prices look cheap relative to the underlying’s recent movement:

I were inclined to make a defined risk bearish bet that the XRT would break six-year support and trade into the mid to low $30s I might consider the following trade idea:

The risks to this trade are simple, if we wake up someday soon and trump and President Xi come to a compromise at the very least to call a truce, and trump gives way on some of the tariffs, then retail stocks, in particular, would rally hard and this trade would be blown out of the water. But as we head into the fall if there is no progress then investors will start to anticipate 10% tariffs on consumer goods coming from China that were pushed off last week till December 15th and In that scenario, I suspect the XRT will be in the mid $30s at some point in the next few months. I would not short XRT here, but the risk-reward of this spread that expires in 2 months looks attractive to me.