Global equities have had a bit of a wild ride this week, following the U.S. Fed’s decision to cut the Fed Funds rate by 25 basis points on Wednesday, while offering forward guidance that was clear as mud and yesterday tariff man slapping a 10% tariff on $300 billion of Chinese goods, with the threat of a step up if there is no real progress in trade talks with China the coming months. The MSCI All-World Index is off a couple of percent this week, approaching 1-year support at 520, a level when it broke below in May on the last bout of trade volatility saw nearly a 7% peak to trough decline. 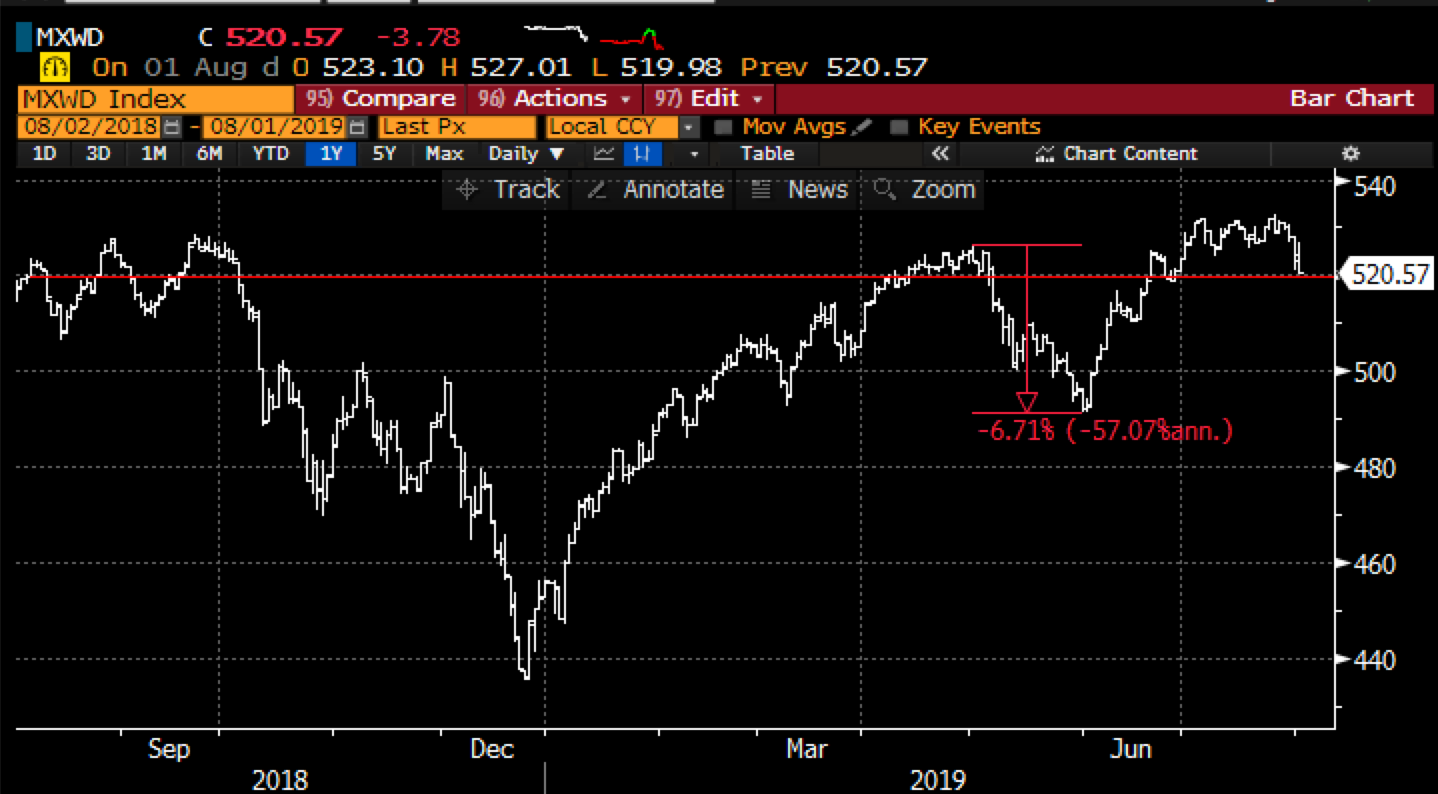 Extending the chart out a bit to the start of 2018 and you can see that 520 has been fairly reliable technical resistance, and another day or so of weakness and the Index will be testing key technical support at the uptrend that has been in place since the Dec lows: 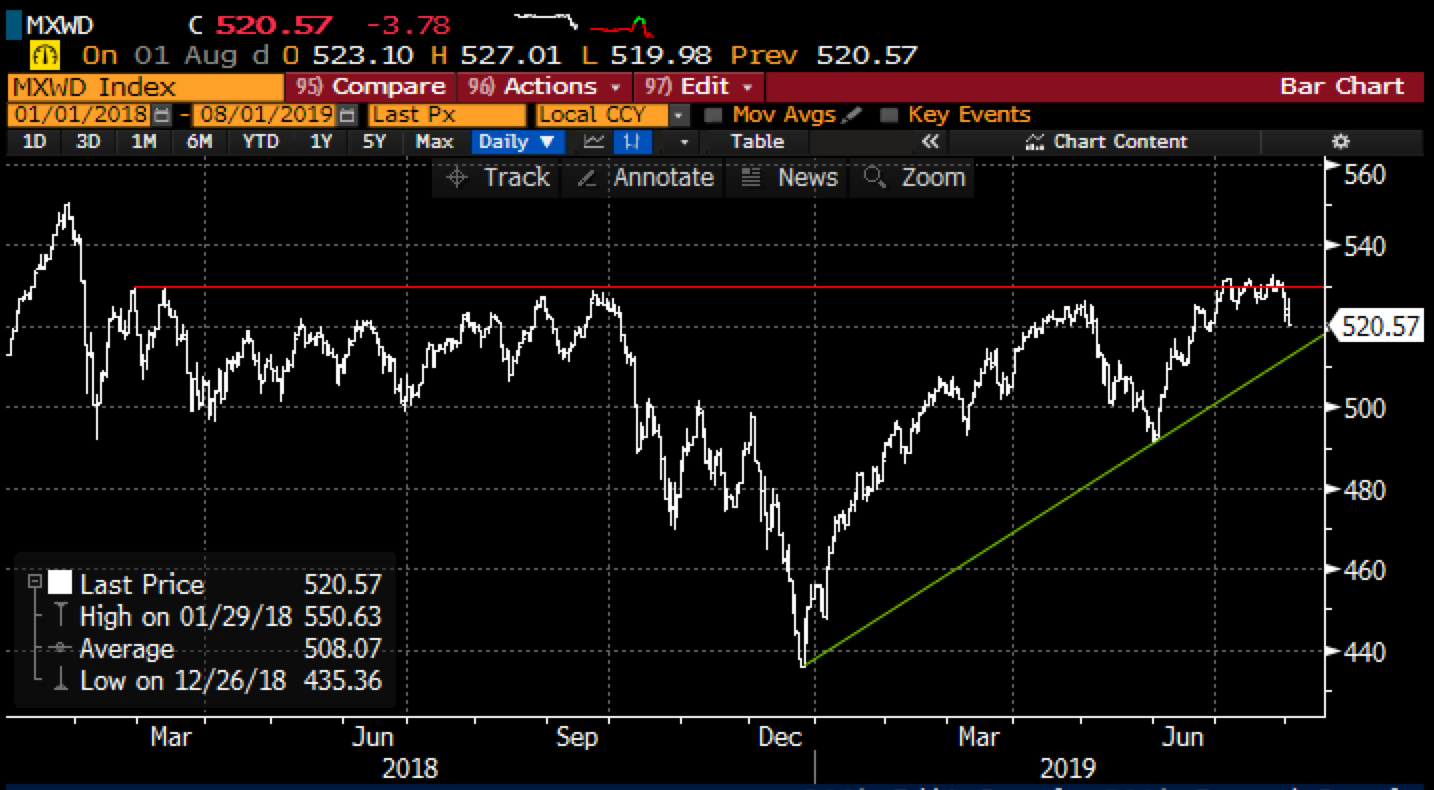 Why look at a global Index? well simple, despite the Fed’s Dovish pivot in 2019, and the first interest rate cut by our Fed in a decade, the U.S. dollar has actually rallied instead of what most thought would happen, decline. This is notable because of the move we saw in the U.S. Dollar as measured by the DXY in 2014 and 2015 when the Fed signaled that they would end Quantitative Easing (QE) and their Zero Interest Rate Policy (ZIRP) which were put in place in the throes of the financial crisis as a way to dramatically ease financial conditions and effectively devalue the U.S. dollar. The DXY rallied 25% from its lows in 2014 to its highs in 2015, and spent the better part of 2015 and 2016 trading at the very high end of the range between $95 and $100: 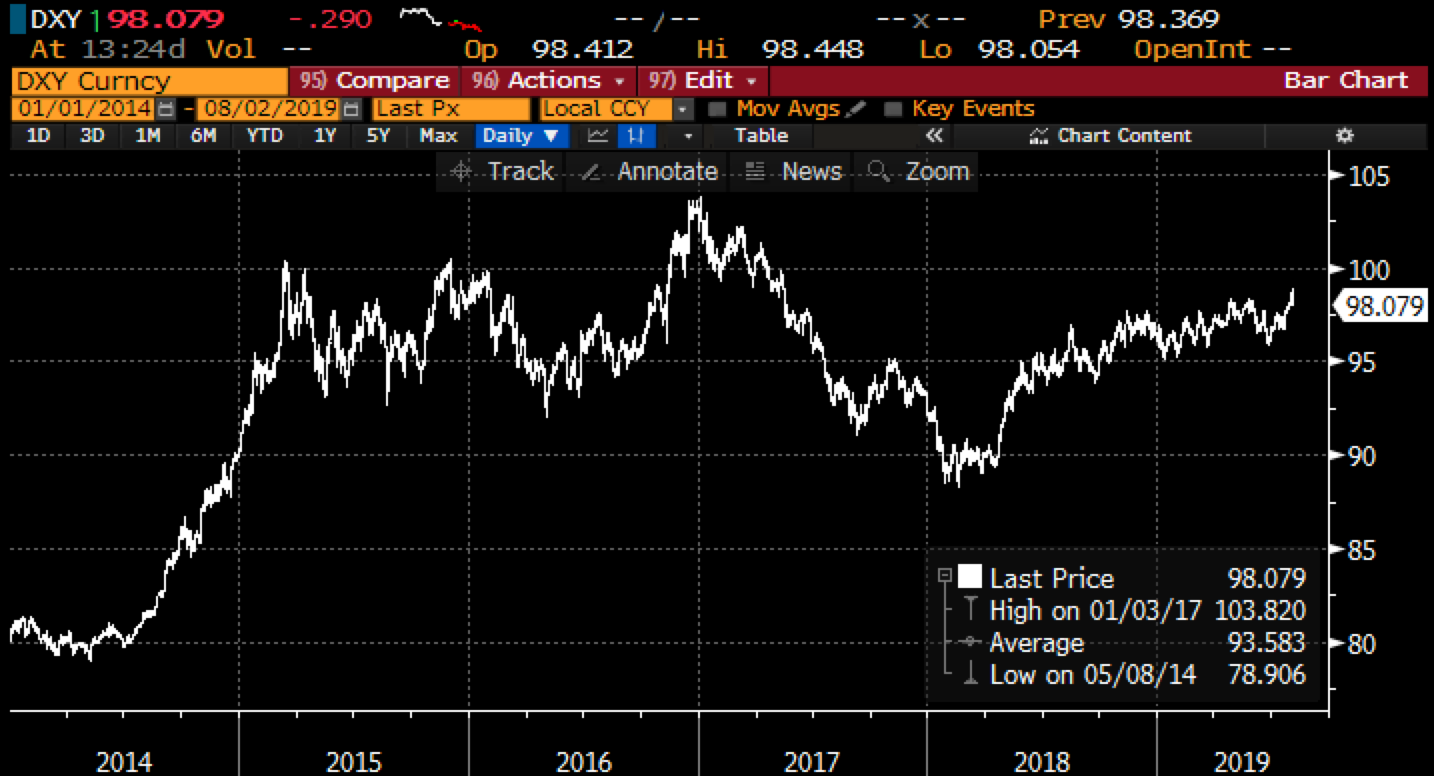 Some will look at the DXY and suggest that this week’s breakout to new two-year highs suggests that the Fed is NOT about to embark on a rate-cutting cycle, which would in effect weaken the dollar, but global equities in the last 24 hours since the tariff hike suggest that more tariffs = slower global growth, which could tip already fragile emerging market economies into recession, not to mention Europe and ultimately the question whether this weakness will be imported to the U.S.

Which brings me to emerging market equities, heavily weighted to global trade proxies with the iShares MSCI Emerging Markets etf (EEM) four largest holdings Tencent, Alibaba, Taiwan Semi and Samsung, making up 16%. EEM is down about 5% on the week, more than doubling the negative performance of the S&P 500 (SPX). The EEM is making a new 5-year relative low to the SPX: 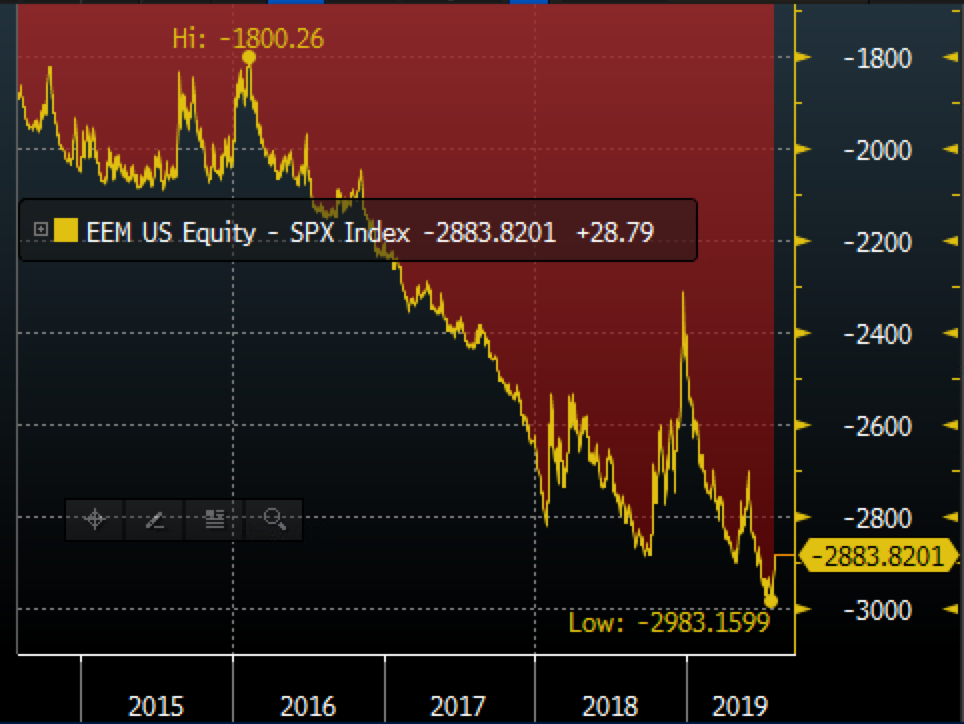 I would also add an important point about USD strength if it is in effect a “flight to safety” from my Fast Money friend and Emerging Markets expert Tim Seymour who suggested this “puts that much more pressure on Emerging Markets FX which is typically half of your trade in EM – if you think Dollar runs more, it is a wrecking ball for EM”.

EEM is in a bear market, down 21% from its January 2018 high, which was at the time and 11-year high and is now below its 200-day moving average and sitting on crucial 3-year support: 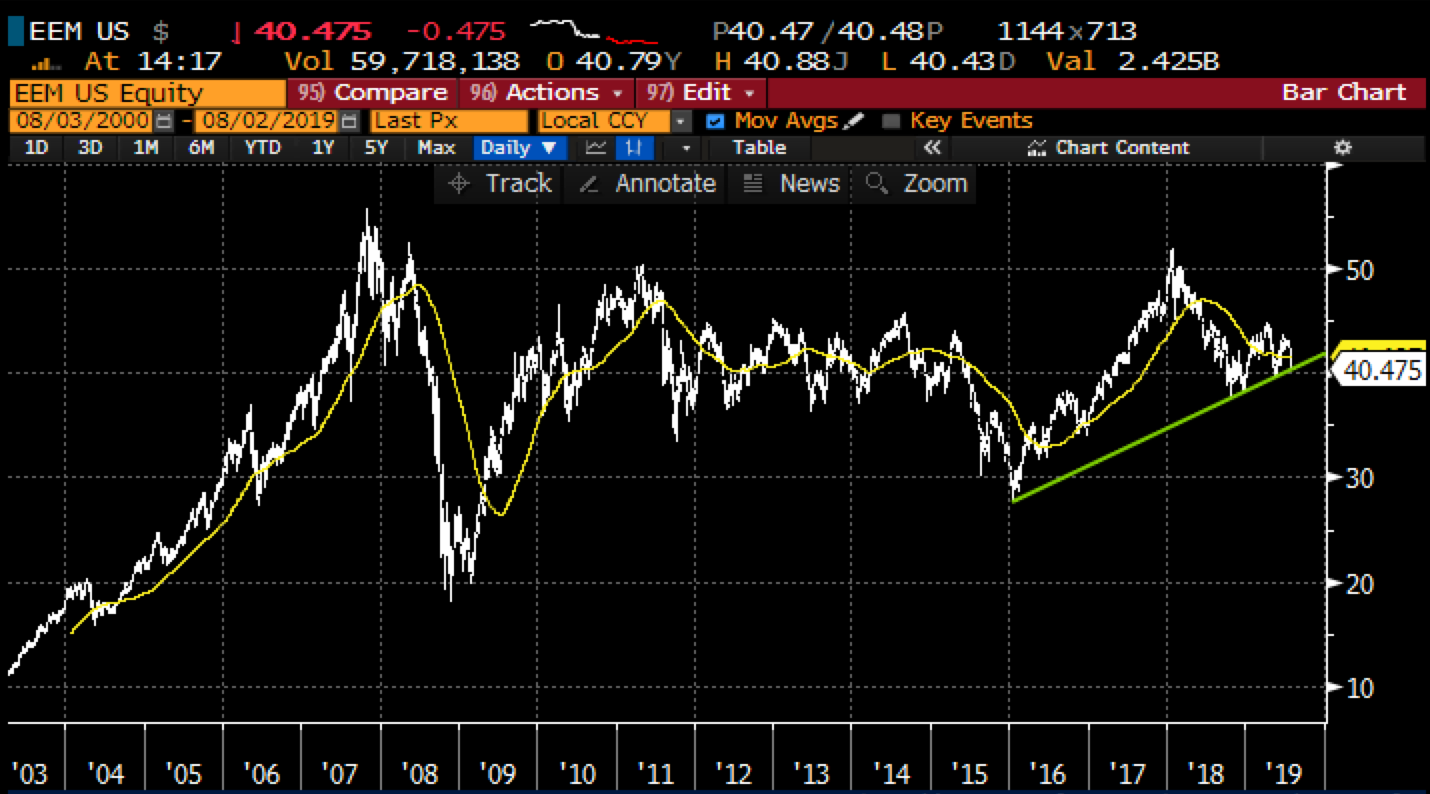 As regular readers know I do not think there is a substantive trade deal to be had any time soon. I don’t disagree with the trade fight, I take massive issue with how it is being waged and what appears to be the measure of success by trump. Whenever its seems like progress is being made it appears that we view that is a commitment by the Chinese to buy more of our goods. The real issue any of the near term pain that our manufacturers and consumers who are bearing the brunt of the tariffs should be at the cost of getting long term concessions about unfair practices relating to forced tech transfer and IP theft in China, and ultimately the battle for future tech dominance that includes massive tech shifts like the buildout of 5G networks.

I think trump made it pretty clear this week that he does not expect a substantive trade deal anytime soon with his unrelenting tweets about this past trade talks, going as far to suggest that the Chinese might slow roll a resolution until the 2020 election and of course with the hissy-fit of new tariffs.

If you think there is no resolution in sight, and more tariffs equal slower gloabl growth, despite global monetary easing, and that U.S. Treasuries, large-cap stocks and the dollar will continue to be a relative outperformer to other risks assets as a sort of flight to safety, then you have to think that one of the hardest-hit risk assets will be emerging market stocks.

So what’s the trade? EEM near the puts in Oct expiration look dollar cheap… short-dated options prices have found support around 15% implied volatility a level that just picked their head up from, but routinely get to the highs 20s and 30s % over the last five years when we have had global growth scares:

Rationale: this trade idea breaks-even down 4% and risks 2.7% of the etf price to make a near the money defined risk bearish bet.

As for near term target, $38 is the next reall support below the May low near $40, and then the Q4 double bottom low near $34. If the etf were to go to $38 quickly I might look to spread the Oct 40 puts by selling a Oct 35 put spread and locking in some of the mark to market gains and reduce my premium at risk at the same time, or possibly roll the puts down and out a bit. 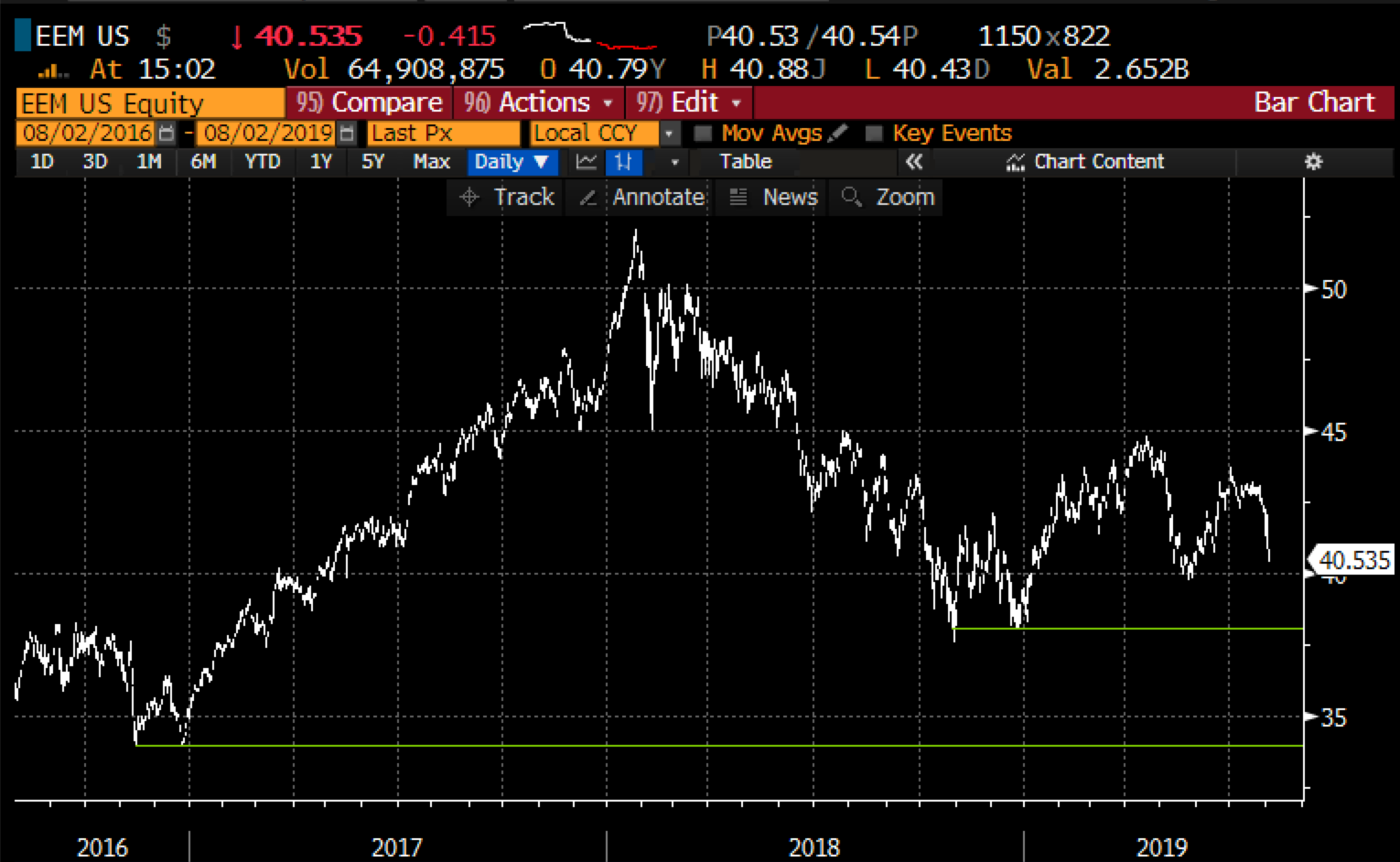