Today after the close Qualcomm (QCOM) will report their Q2 earnings. The options market is implying about a 5% move in either direction, which is slightly rich to its four-quarter average of about 4.25%. With the stock at $75, the August 2nd weekly 75 straddle (the call premium + the put premium) is offered at $3.80, if you bought that, and thus the implied movement for earnings you would need a rally above $78.80, or a decline below $71.20 to make money.

Shares of QCOM are up 32% on the year, slightly under-performing the Philadephia Semiconductor Index’s (SOX) 36% year to date gains. The stock has had a fairly volatile 12-months, based on both macro and issues specifically affecting the company. The pne year chart below shows the recent consolidation which corresponds to the 2018 Q4 highs and also the gap higher in April and the gap lower in May: 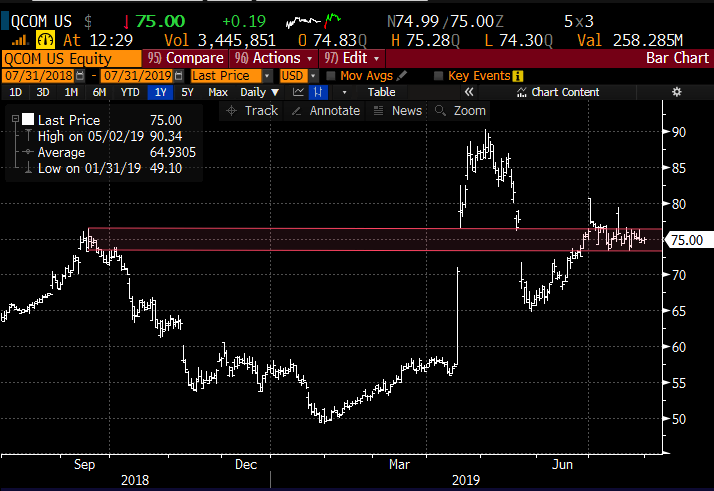 Wall Street analysts remain fairly mixed on the stock despite this year’s strong performance with 15 Buy ratings, 13 Holds and 1 Sells.

QCOM’s sales are expected to be down for the fifth consecutive year, but that is supposed to reverse in a fairly big way in its fiscal 2020 with high teens sales growth expected, per Bloomberg:

After years of commensurate eps declines, analysts are also forecasting a massive bump in eps in fiscal 2020:

QCOM investors and the stock for that matter seem to be stuck between what was deemed to be a huge win in the Spring when Apple (AAPL) settled a long-running licensing dispute with QCOM, agreeing to a 6-year patent-licensing deal for Qualcomm to supply modem chipsets for Apple products, and Intel’s recent sale of their modem chipset business to Apple in what many expect the company to develop their own mobile modem chips, edging out QCOM in the future.

I suspect, for the time being, a beat and raise should give investors confidence that AAPL’s business is in good standing for at least a few years and with the stock trading below a market multiple in the current fiscal year, and at 11.5x expected FY2020, any confidence in the near future and the stock breaks out of the current range, possibly on its way back to the mid to high $80s.

The ideal scenario is that QCOM stock is near 80 on Aug expiration and the short 80 put expires worthless or can be covered for a small amount and you are left long Oct call for $1.35 or about 2% of the stock price.

The max risk of the trade is $1.35 on a sharp move lower than current levels or a sharp move above the $80 strike price.

Rationale: this trade makes sense if you think the stock has room to run post results, but not much greater than the implied move, but the breakout of the current range could set the stage for a larger breakout into the fall.

On the flip side, if you thought the stock could come back towards $70 after results you might consider an Aug 2nd 75 – 70 put spread for $1.50 with the stock at $75, this trade idea risks 2% of the stock price for a near the money break-even with a 3 to 1 potential payout if the stock is down 6.5% in the next two days.