Apple (AAPL) will report their fiscal Q3 results on Tuesday after the close. The options market is implying about a $9 move between now and next Friday’s close or about 4.5%, most of which is for the stock’s reaction on Wednesday after the print. The stock has been fairly volatile the day following results over the last year, with an average one day move of 6% over the last four quarters.

Back on May 31st, I took a look at what I believe AAPL’s very special place in our on-going trade war with China (As American as Apple iPhone), suggesting that the company should not only fear the trump administration’s ire, but also that of the Chinese government and their consumers:

One seemingly everpresent puzzle piece in the trade dispute with China has been their tech and telecom equipment behemoth Huawei, specifically the U.S. reluctance to allow U.S. companies to use their tech in the U.S. and the pressure being put on our allies also not to use it in the buildout of 5G networks for security reasons. This also comes at a time where the iPhone market share in China is declining rapidly to less than 7%, while Huawei’s has been increasing to be the number one smartphone provider with 30% share. The targeting of Huawei has squarely put Apple in the sights of Chinese leadership. Wired magazine had a good summary of the options that Bejing has at their disposal in an article yesterday titled: If China Really Wants to Retaliate, It Will Target Apple among the options listed:

Apple’s recent deceleration in China coincided with the beginning of the tariff war last spring. It’s hard not to see a connection, especially in light of recent evidence that the US actions against Huawei are creating a nationalist backlash in China manifested as a “buy China, boycott Apple” movement.

Beijing almost certainly can ratchet up or dial down the nationalist fervor by manipulating social and traditional media.

At the time, shares of AAPL had traded down nearly 20% from its post-earnings highs in late April, trading at nearly the exact mid-point of the 2019 range: 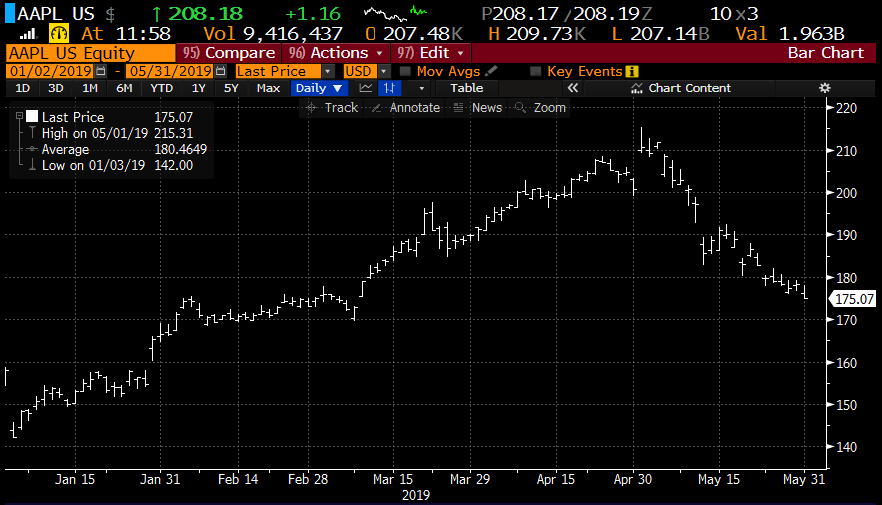 As expectations of a thawing of the trade tensions, or at least a tariff truce became more evident into the G-20 meeting scheduled for late June, global equities started to recover from their May-malaise, and AAPL, in particular, rallied 10% in a straight line on the whiff of a mere truce on the tariff front, this week testing its fiscal Q2 earnings gap: 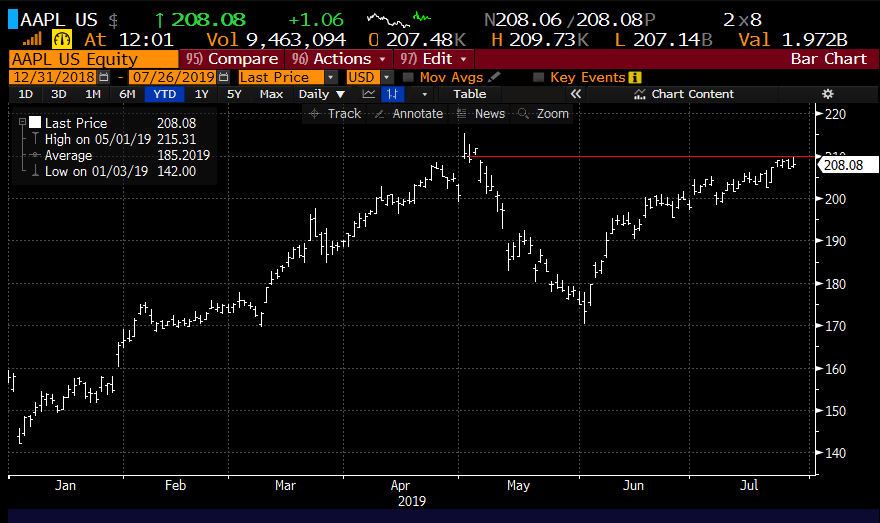 Much like Alphabet (GOOGL) into it’s report last night, expectations are not particularly high for AAPL, still down about 11% from its all-time highs made in October of 2018, but up nearly 50% from its 52-week lows made in January, placing the stock up 32% on the year. If the company is able to post a beat and raise, despite headwinds from the trade dispute and the strength of the dollar, then the stock is very likely to have a greater than expected move to the upside, possibly not too dissimilar to GOOGL’s move today.

On the flipside, there is a decent chance that AAPL reports a quarter like Amazon (AMZN) last night where a revenue beat and was tempered by greater expenses, leaving the stock down a touch. I don’t mean to suggest that AAPL will do similar, merely there might be something in there for the bulls and bears to pick on, and after such a sharp move with the stock hovering back near its prior highs from Oct 2018 that the stock might consolidate a tad.

Lastly, a miss and guide down and the stock is easily on its way back to $190 in the coming days.

Tariffs/Trade: today trump tweeted that he would not grant the requested “wavers” for components going into Apple Mac Pros… and the company’s products would not be subject to tariff’s if they were made in America. That is all true, and it is hard to argue that more products produced by U.S. companies, consumer by U.S. citizens should not be made in America, but it is important to note that this is a decades-old issue where corporate America and our consumers have agreed to a sort of devils-bargain where the trade-off is simple, off-shore manufacturing, increases profit margins, resulting in prices for consumer goods. The issue is simple, once these manufacturing jobs left, and supply chains established in new low-cost regions like China with cheap labor costs, the costs associated to bring back those factories is too great, and not likely able to be absorbed by corporations and likely passed on to consumers, making these products less attractive to cheaper foreign goods. There will be no big announcements by massive U.S. multi-nationals like Apple to bring back meaningful production anytime soon. Frankly, they have little incentive to rush to turn their manufacturing upside down in what will likely have knock-on effects for years if not decades to come before they get a sense for what a substantive trade deal between China and the U.S. looks like.

My take into the print: despite the stocks bounce from its June lows and its 32% YTD gains, it’s my sense that expectations are not particularly high and just an ok quarter with optimistic guidance could cause the stock to rally back towards the consolidation level from last Sept/Oct near $220. But the stock has come a long way since early June without much news, and given what appears to be the relative cheapness of options prices into the print, and might be a heightened period of volatility following next week’s Fed meeting as the focus will then turn squarely to trade war progress, defined risk strategies make sense.

If I were inclined to play for a bounce out of earnings next week I might consider merely buying a near the money call:

Rationale: if you thought the stock sets up similarly to GOOGL, where relatively low expectations are met with better than expected earnings and guidance then the chance of an outsized move to the upside seem like a good bet.

On the flip side, if you are Long AAPL stock and fear that the company’s results and guidance could be squishy given the trade situation and into a quarter where AAPL will be introducing new phones in late Sept, causing current users to hold out to upgrade, then the Aug 2nd weekly 207.50 (with stock at 208) put offered at $4.25, or 2% of the stock price could serve as good near term protection.