Today after the close Texas Instruments (TXN) will report their Q2 earnings. The options market is implying about a $5, or 4.25% one day move tomorrow in either direction, which is basically in line with the average one day move over the last four quarters, but rich to the ten year average of about 3.1%. 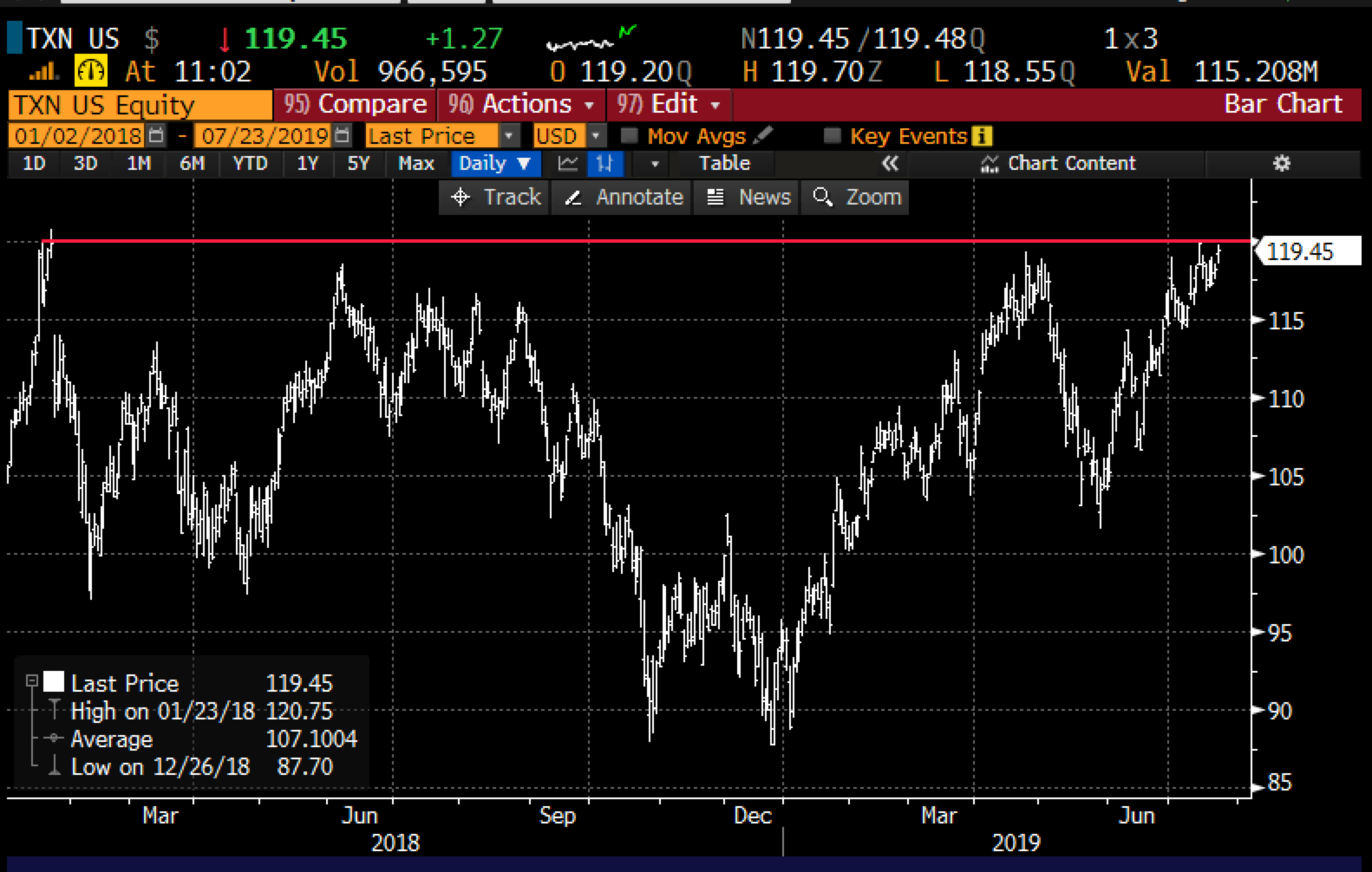 Despite the stock’s relative outperformance to the broad market, it has underperformed a measure of its semiconductor peers, with the SMH (the ETF that tracks the group) up 36% YTD showing very poor relative strength: 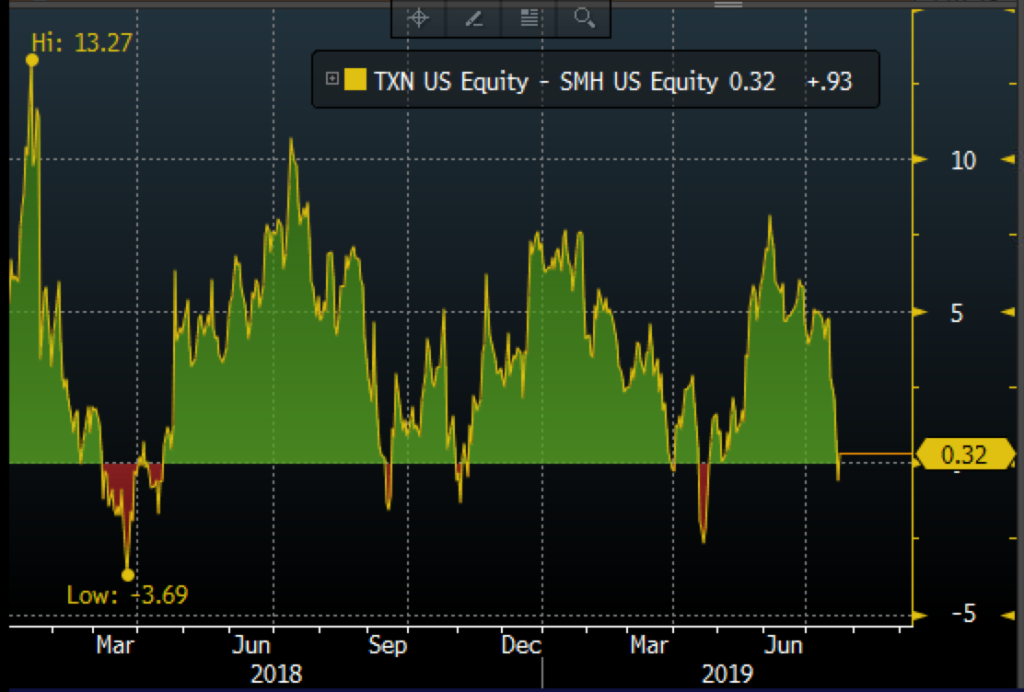 Which leads me to what I would say is lukewarm support for the stock by sell-side research analysts with only 12 Buy rating, 19 Holds (which many call soft-sells”) and 2 Sells, with an average of the 12-month price targets near $117, below where the stock is trading.

One reason for the lukewarm reception by the sell-side might be current valuation relative to expected high single digits declines in eps and sales in 2019 with a 10% and 5% respective bounce in 2020. The stock trades 23x 2019 expected eps and 21x expected 2020 eps, with current year nearing 8-year highs, and both trading above their 5-year average: 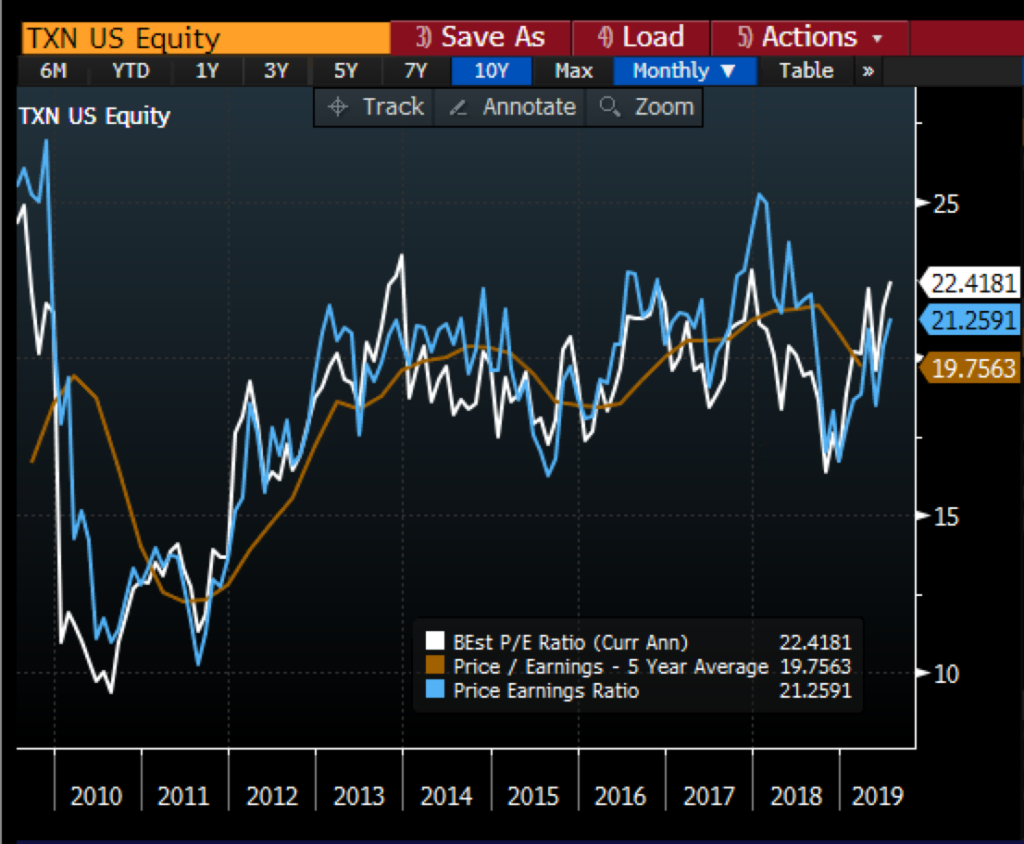 Expectations into the print: Back in late April when the company reported Q1 and guided for Q2 they suggested on their call that “have just completed our second quarter of year-on-year declines for TI. If you look at history, cycles are always different, but typically the industry would have four to five quarters of year-on-year declines before year-on-year growth resumes”. Current eps estimates are calling for three more quarterly eps declines following Q2:

And two more yoy sales declines with Q1 2020 expected to be flat:

TXN’s June quarter guidance of flat-ish eps and sales was well below their season pattern for Q1 to Q2, which at the time did little to shake investor confidence in late April as the stock actually rallied after the print as many expected the guidance to prove conservative, but the company’s industrial exposure, specifically related to the auto industry, restrictions with their Chinese customer Hauwei and the continuance of the trade spat with China may prove to be aggressive?

So what’s the trade?? Short-dated options prices seem dollar cheap to me. If you thought the company could beat Q2 and guide higher and call a bottom as was the case with Taiwan Semiconductor’s commentary last week, then the stock is likely to break out above resistance at $120 and rally at least in line with the implied move of 4.2%. With the stock at $119.60, the July 26th weekly 120 call is offered at $2.40, or 2% of the stock price for a break-even up at $122.40, up 2.4%.

But here is the thing, both of these are BINARY, get the direction wrong post earnings and you are likely to lose most of the premium by the end of the day tomorrow. Weeklies at the money into events make sense for those with existing positions if they are looking to hedge or add leverage to an existing position. For instance, if you did not want to sell a long position but wanted to lock in gains into a potentially volatile event or period of time then it might make sense to tactically buy put protection, and I don’t mean this frequently, as it could be a massive drag on returns. Also if one was willing to take profits in a long position but wanted to define risk into an event one could do what we call stock replacement, selling long stock and risking what you are willing to lose with a call or call spread.

If I thought the stock could have a sustained move in either direction I might look out to August expiration, capture most of earnings season, the Fed’s rate decision on July 31st and any commentary on the trade dispute with China. Possibly the Aug 120/130 call spread for about $2.50 vs $119.60 or the Aug 119/109 put spread for about $2.50 vs $119.60. These trade ideas risk a little more than the binary weekly ideas above, allow for a few more weeks of time, but the downside is that each cap gains to the short call or put strike.