Despite the U.S. stock market at all-time highs, the fact that a group like consumer staples, long thought to be defensive in terms of their healthy dividend yields and the “staple” aspect of the products they sell keeping pace with the market with most of the large components trading at premium multiples to the S&P 500 is fairly telling about investors’ comfort level with the stability of market gains. There are no shortage of competing forces at play, the 10-year U.S. Treasury yield just above 2%, at two-year lows makes stocks like staples with very strong cash flow generation look attractive, while the strength of the U.S. dollar and inputs like crude oil just off of three-year highs might prove to be a headwind to earnings.

Shares of PEP trade at nearly 24x expected 2019 eps which is expected to decline 2%, its first decline in 4 years.. on a 3% expected sales growth. PEP’s forward PE is trading at levels not seen since 2002. 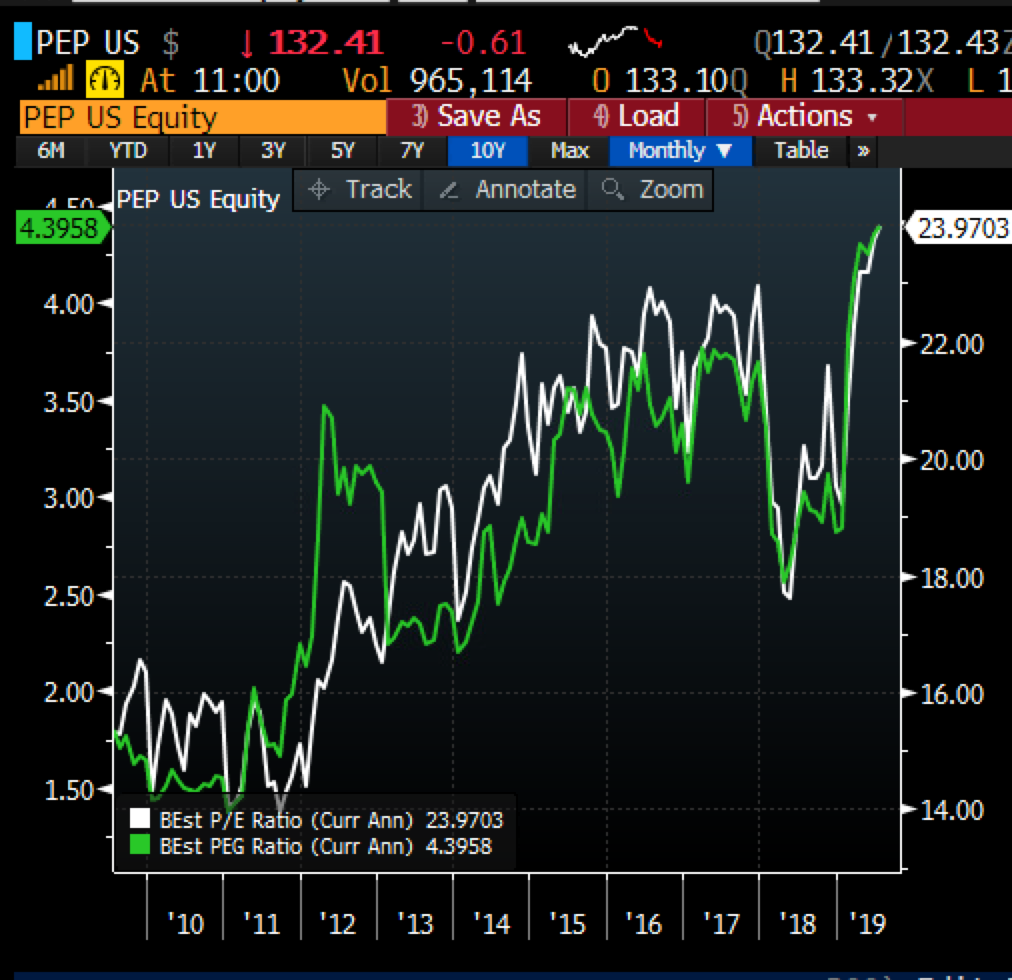 The stock’s ten-year, 200% ascent from its 2009 financial crisis lows has been fairly orderly, holding the uptrend the entire time, with the most recent test of trend and hold in late December resulting a violent snapback and new all-time highs in early April: 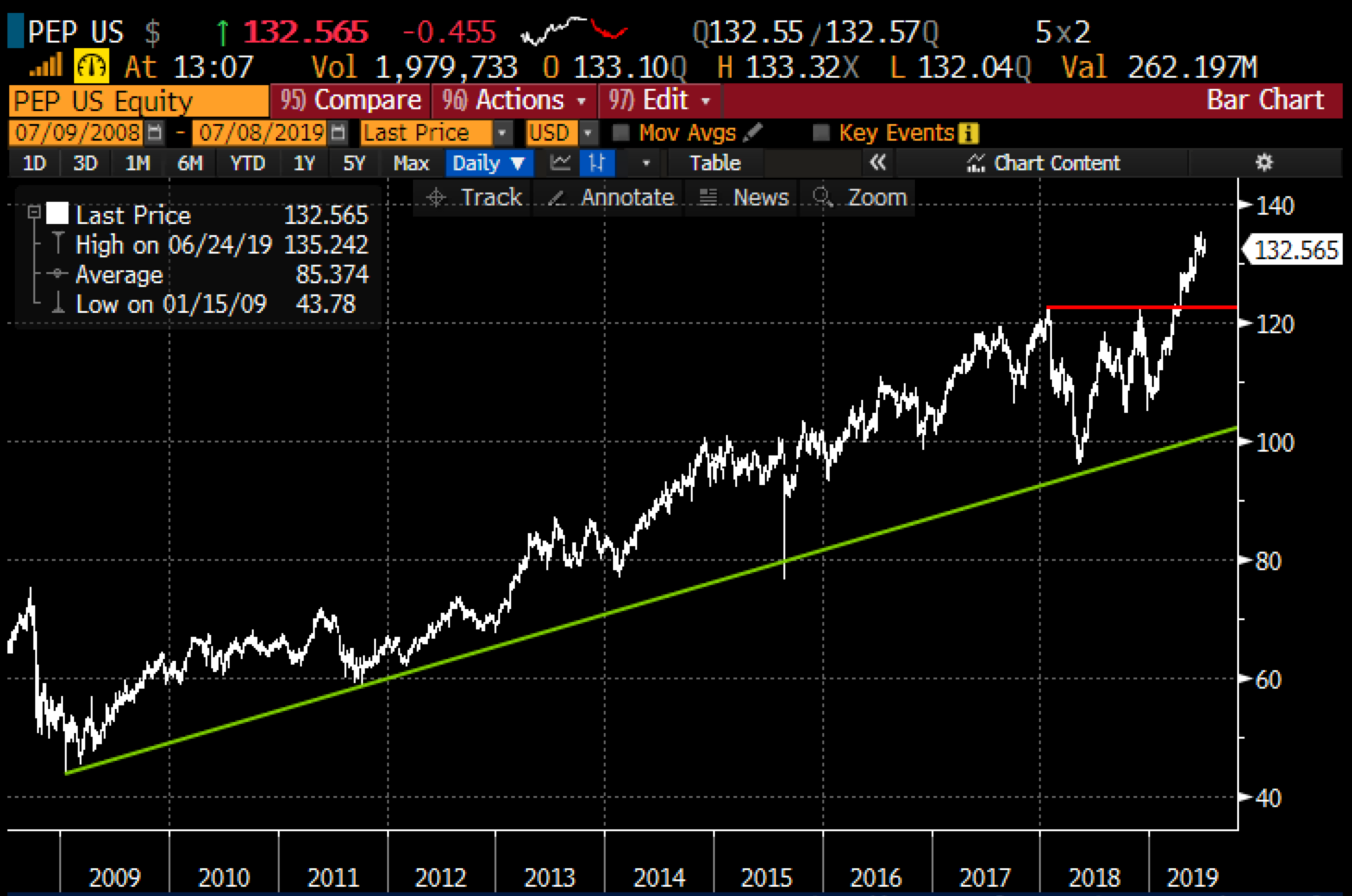 The stock’s nearly 30% rally from $105 in late December, to $135 late last week outperformed the SPX’s 27% rise in the same period, while also showing tremendous relative strength during the 7% peak to trough decline in the index in May: 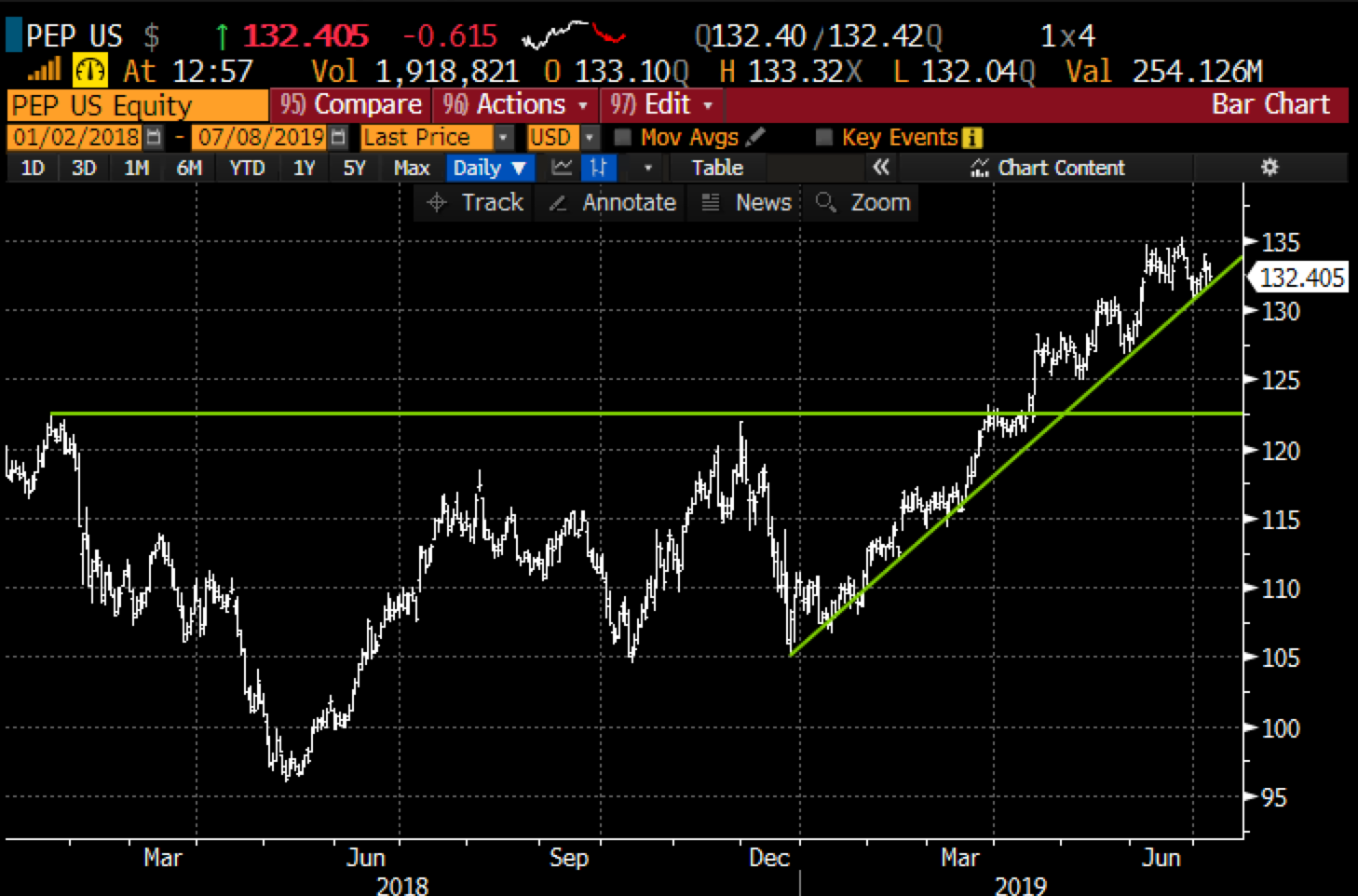 What’s my View? PEP’s valuation relative to growth is really the only major reason to sell the stock in my opinion. The stock is priced for perfection, but it is worth noting that the stock is likely to show relative strength on the downside if there is a sell-off similar to what we saw in Q2 2018 as PEP only declined about 14% peak to trough compared to the SPX’s 22% peak to trough decline.

So what’s the trade? If I were long the stock and agreed that the stock has far more potential downside in the instance of negative news as opposed to upside on positive news, I might consider spending 1% of the stock price to own an at the money weekly put… for instance with the stock at $132.55 the July 12th weekly 132 put is offered at $1.40, with a break-even down at $130.60, within the implied movement of the stock. This is dollar and vol cheap protection if you thought the stock could have an outsized move to the downside on a miss and/or guide lower. That said the options market is only suggesting there is a 25% chance that the stock is $130 on this Friday’s close. So a 1 in 4 chance you lose that premium if held to expiration, not exactly a high percentage bet. But I guess one of the important takeaways when considering put protection is whether or not the cost to define one’s risk is worth what is likely the drain on returns to employ such a strategy too frequently.

Obviously, if you can buy at the money puts for about 1% of the stock price in the weekly expiration that you can do the same for calls if you were bullish, thinking the company issues a beat and raise and the stock makes new highs.

I would add that Wall Street analysts are fairly mixed on the stock with only 9 Buy ratings, 16 Holds and 2 Sells with an average 12-month price target of below where the stock is trading. This rating disparity is fairly unique for a $185 billion market cap multi-national.

Last week on CNBC’s Fast Money I highlighted some bearish options activity in the XLP in July that looked to play for rejection in the consumer staple etf at the prior high.