Lululemon (LULU) reports their fiscal Q1 results today after the close, the options market is implying about a 10% one day move tomorrow that is shy to its average one-day post-earnings move over the last four quarters of 14.25%. Over the last two years, the stock has been down only once the day following results with an average gain of 11%, per Bloomberg:

With the stock near $170, the June 14th weekly straddle (the call premium + the put premium) is offered at about $17.50, if you bought that and thus the implied movement for the earnings event you would need a rally above $187.50 or a decline below $152.50 by Friday’s close to make money.

Shares of LULU are up an eye-popping 40% in 2019, and up 55% from its 52-week lows made on Christmas Eve, Since breaking out to new highs on a massive gap back in late March on their Q4 earnings beat the stock has been range-bound between the mid $160s and the high $170s, only once attempting to fill in the earnings gap, but as the chart below shows, it found support right where it should have at the intersection of the uptrend from the 2018 lows and the late March breakout level: 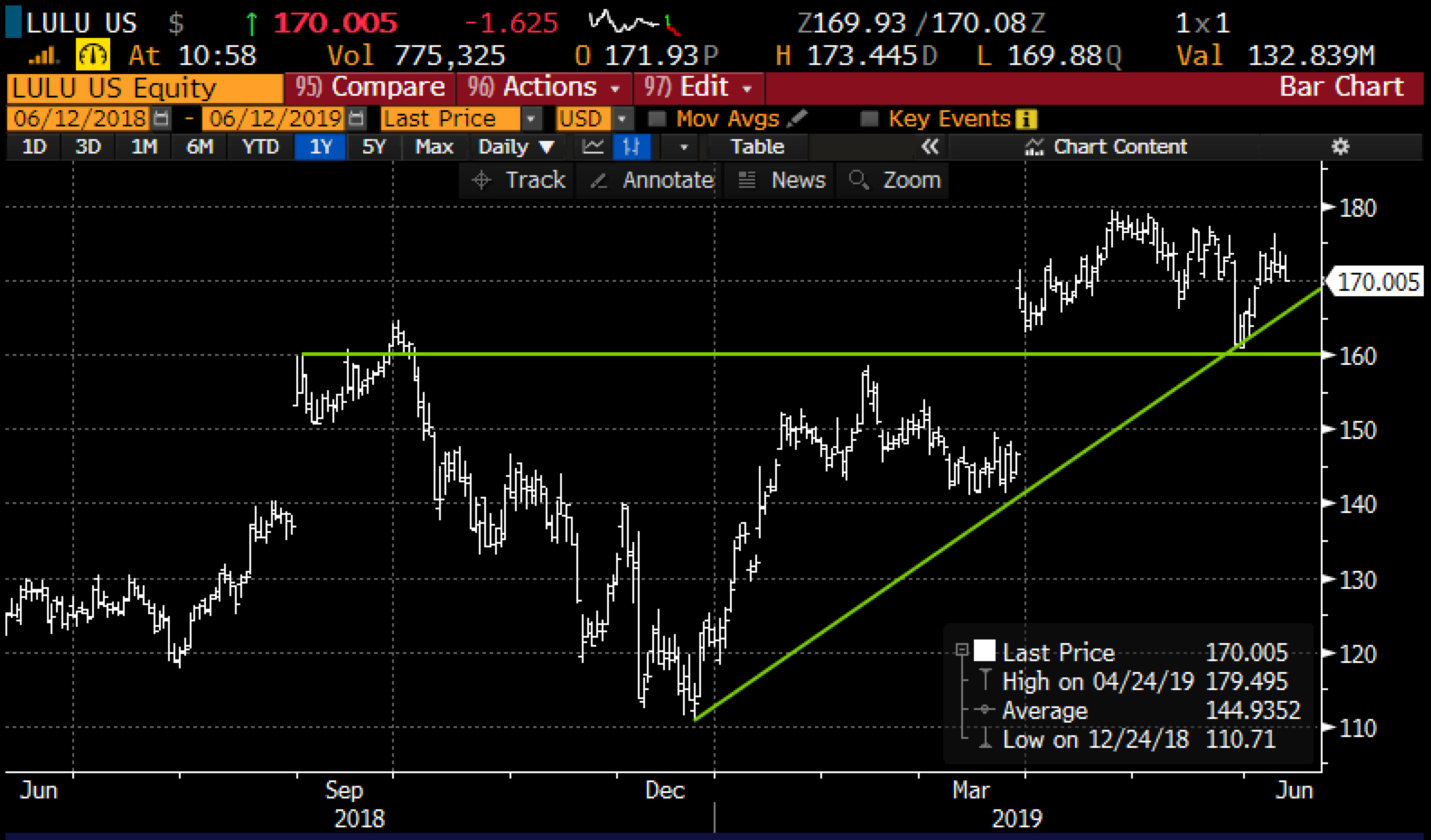 Shares of LULU trade at about 37x this year’s (FY 2020) expected eps growth of 20% on 15% expected sales growth. This compares to Nike (NKE) trading at 32x expected next year (FY 2020) eps growth of 17% on 8% expected sales growth. LULU seems a tad rich to one of its main peers on an eps basis. But it is worth noting that LULU is a $22 billion market cap company, trading at about 6x its expected 2020 sales of $3.8 billion vs NKE which sports a $130 billion market cap and is expected to print close to $43 billion in sales next year. NKE is expected to report its fiscal Q4 results on June 27th. Shares of NKE this year have underperformed LULU and the S&P 500, with the stock up 13%, down about 7.5% from its all-time highs made in April as the company could find itself in the middle of a protracted trade war with China.

Analysts remain relatively bullish on the stock with 21 Buy ratings, 13 Holds and only 1 Sell with an average 12-month price target of about $185. I think it is safe to say that expectations for the company to put up a beat and raise are relatively high and with the stock trading at a PE/G (PE to Growth) of just over 2, very near the high end of the 10-year range, the stock is priced to perfection.

Regular readers know that playing a stock like LULU into earnings for a new high is not my cup of tea, especially when it appears expectations are fairly high, and the slightest miss on same-store sales and/or margins might have this stock retesting support near $160 before you can say downward dog.

If I thought the stock could break out to new highs I might just play for a 10% bounce, targeting the high $180s, while I would not use the weeklies I might consider the following call butterfly in June 21st expiration:

Rationale: this trade idea risks less than 2% of the stock price to make a bullish bet into a potentially volatile event with seven trading days to earn out. Obviously, you need to get a lot of things right to merely break-even, first and foremost direction, then of course timing and magnitude of the move. But the idea of the butterfly is to pick a strategy that targets the implied move and by selling two of the 190s near the target, it helps offset some of the vol decay post results. If you get the direction right, this trade idea offers nearly a 5 to 1 payout on an 11% move to the upside in the next week or so.

If I were inclined to play for a miss and a down 10% move I might just use the weeklies… same disclosure for long premium directional strategies as above, but it’s important to note that using weeklies makes the trade idea that much more binary.

Rationale: with options premiums so elevated into the results, it is a very binary trade to be long options in a directional basis, and one would only risk 3% of the stock price on a two-day trade if they had a strong conviction on the outcome.