A couple of recent IPOs, White hot IPOs to be exact are set to report earnings tonight, Beyond Meat (BYND) and Zoom Video (ZM). I thought it might be fun to take a look a what the options market is implying for each and offer some thoughts.

Let’s start with the plant-based “meat” company Beyond Meat (BYND) who priced 11 million shares, or about 19% of their float on May 1st at $25 sporting a $6 billion market cap. The stock nearly doubled on its opening print and has since more than doubled since then.

Attempting to chart a stock with just a month of price inputs makes little sense and the only real line to be drawn is the uptrend from the day following the IPO, 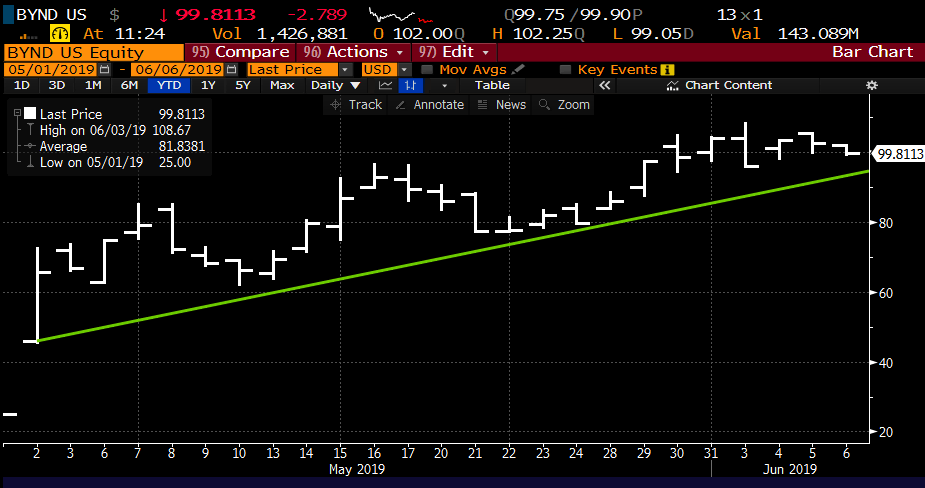 But… given the implied movement, the massive gains since ipo, unusually positive sentiment, the small float, 35% short interest… this thing could go be at $80 or $120 tomorrow and it would not surprise me in the least. The thing that would shock me is if it were $100.

And then Zoom Video (ZM), the cloud-based enterprise collaboration company, which sold 24 million shares at $36 on April 17th, and sports a $20 billion market cap, has seen its stock more than double in a little less than two months. The implied move in the options market for ZM is about 10%, without weekly options and $5 wide strikes, we will have to look at the June 21st near the money strangle (the closest to the money call premium + the closest to the money put premium). With the stock at $78.50, the June 75 / 80 strangle is offered at about $8.80, most of that implied movement is for the earnings event, but the out of the money nature of the strikes make it less straight forward than just looking at a weekly at the money straddle like in the example above.

Again, with such little trading history, it is hard to make any judgments about the chart, but I would add that considering the volatility in the markets, especially in high growth/valuation tech, given ZM’s initial gap, its ability to hold all of the initial gains and base between $70 and $80 is fairly impressive. 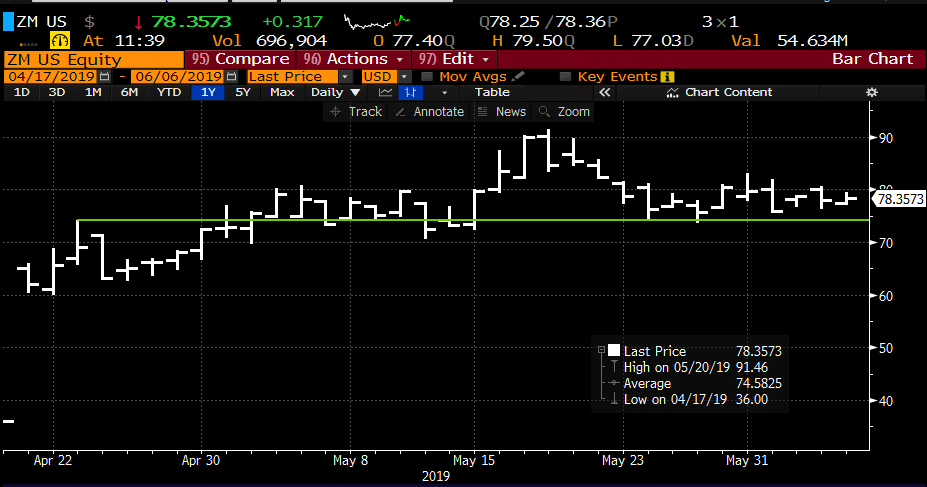 ZM has a large short interest at 27% of the float, and it is worth noting that Wall Street analyst sentiment is fairly mixed with 7 Buy ratings, 10 Holds and 1 Sell, with an average 12-month price target of about $75, below where the stock is trading. It is worth noting that the company is expected to book $522 million in sales in current fiscal 2020 and are expected to turn a slight profit on an adjusted basis, but lose about $37 million in GAAP net income.

To buy near-dated options in either of these names to make a directional bet is nothing short of gambling with worse odds than a coin flip, with the implied move so high, and so much uncertainty around their first quarterly reports, you need to get a lot of things right to merely break-even, direction first and foremost, but with premiums so high, earning out the magnitude of the move in a certain amount of timing is a hard way to make a living.