Salesforce.com (CRM) is scheduled to report their fiscal Q1 results today after the close. The options market is implying about a 5.7% move in either direction or about $8.50, which is very rich to the 4.25% average over the last four quarters, but below its ten-year average one-day post-earnings move of about 6.5%.

Since breaking out to a new all-time high in early March, the stock has been fairly range-bound, despite making a new brief high in late March and then again a brief one in late April: 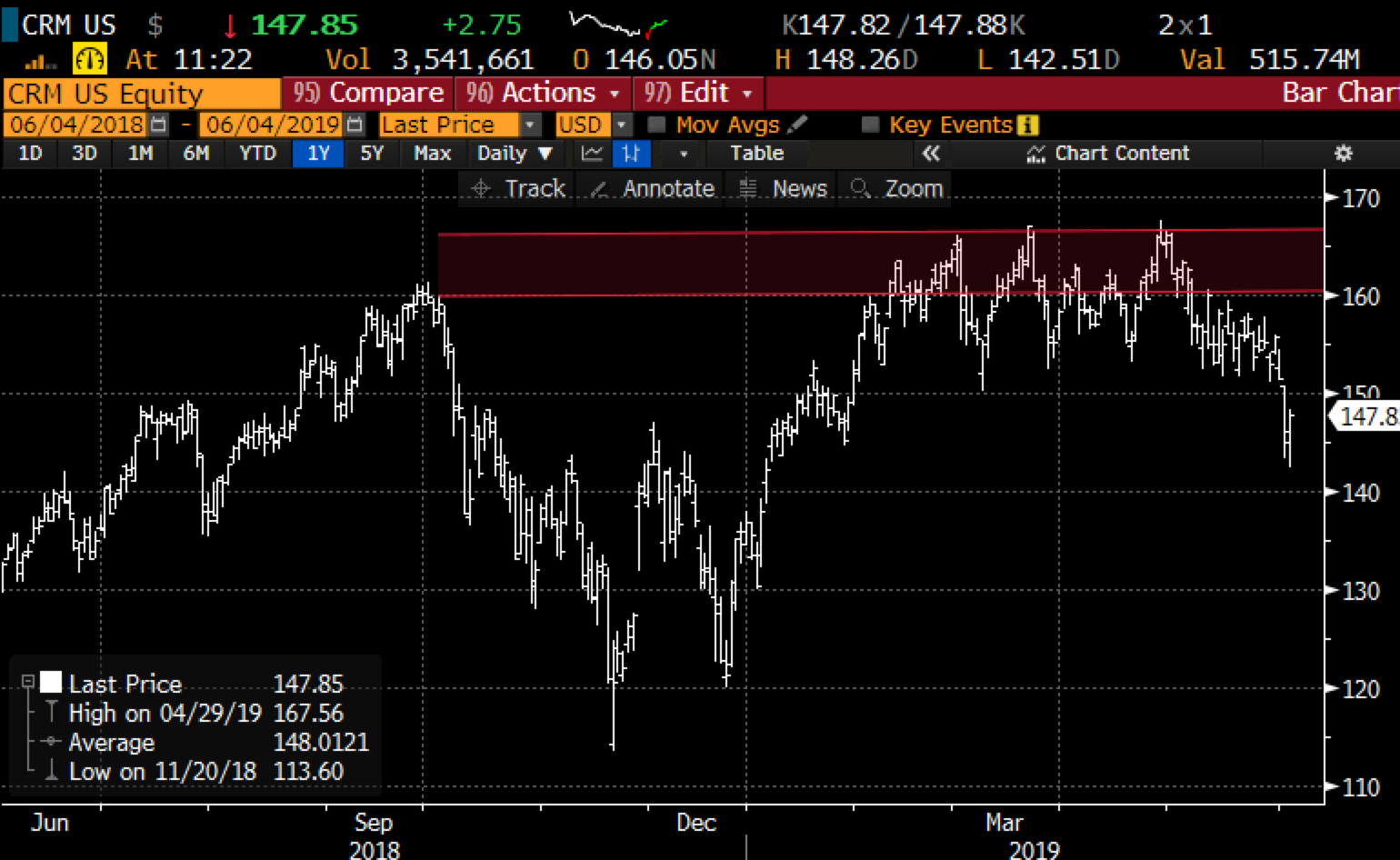 Taking a slightly closer look at the year to date chart of CRM, yesterday’s breakdown on good volume came at an important technical range in the low $150s which has been support since early February, but also marking the stock’s first close below its 200-day moving average since January 3rd: 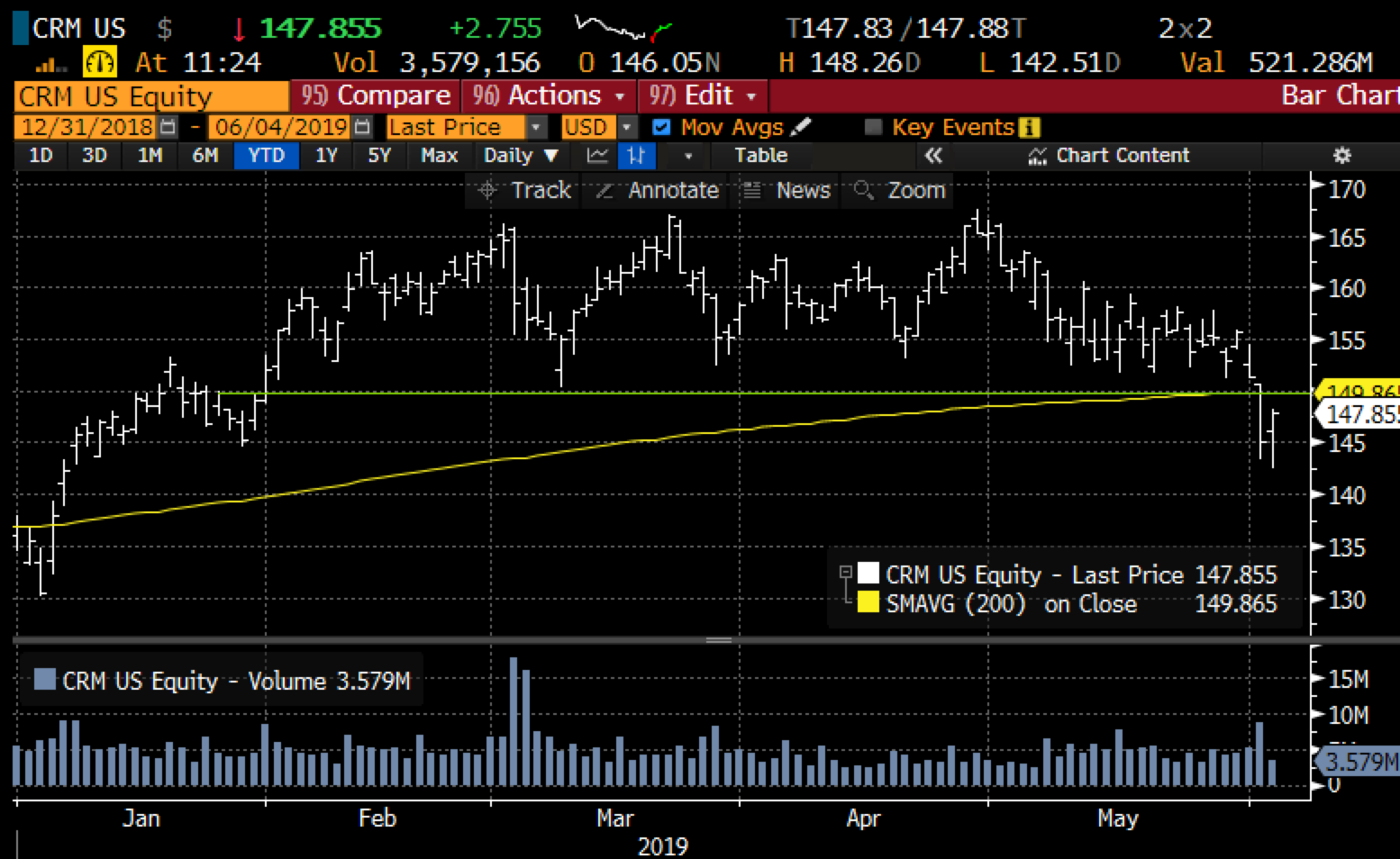 Shares of CRM have actually underperformed the Nasdaq Composite’s 11% ytd gains, only up 7%, while it is down 12% from its all-time high made in late April vs the Nasdaq’s 9% decline.

One reason might be the stock’s massive outperformance over the last couple of years, the stock’s overwhelmingly positive sentiment (41 Buy Ratings, only 3 Holds and NO SELLS!!) and of course its eye-popping valuation. CRM trades about 55x expected fiscal 2020 eps (adjusted) and 7x expected FY2020 sales.

MY VIEW: for CRM to retake $150 and try to get back towards resistance above $160 the company would need to be put up a stellar quarter with fairly optimistic guidance. On the flip side, weak quarter and so so guidance and the stock is on its way to its Jan lows in the $130s.

So what’s the trade? I’ll lay out two, First, playing for a beat and raise and a retest in the coming weeks of $160…

Rationale: this trade idea risks about 2% of the stock price to make a bullish bet that the stock is up 10% in two and a half weeks on June expiration. The options market is saying there is about a 17% chance of that, which I would not exactly suggest is a high probability, I would add that to increase the odds of success, you could easily move the strikes closer to the money, but if it is a spread the risk-reward profile looks very different. Buying short dated out of the money options or spreads into events like earnings are generally low probability bets to make the implied movement as you need to get a lot of things right to merely break-even first and foremost direction, but then also magnitude of the movement of course timing, which is why we suggest for those convicted on a post-event directional move it makes sense to risk what you are willing to lose if you desire to define your risk leads to long premium trades as opposed to owning or shorting the stock underlying stock.

Or If I were playing for a miss and guide down and a re-test of the January lows, I might consider the following put spread in July expiration:

Rationale: the disclaimer above in the prior trade idea for long premium trades into events obviously applies here, but this trade idea risks 3.3% of the stock price playing for a nearly 14% decline in a little more than a month and a half, offering a potential payout of 3x the premium that is at risk, which the options market places at a little less than 15% chance of happening.