Today after the close Uber will report their first quarter as a publicly traded company. The options market is implying about a $3 move in either direction between now and tomorrow’s close, or about a 7.5%. This is calculated by taking the May 31st 40 straddle (the call premium + the put premium = ~$3) vs stock at $39.93 and dividing by the strike price. If you bought the straddle, and thus the implied movement between now and tomorrow’s close you would need a rally above $43 or a decline below $37 by tomorrow’s close to make money on buying the implied movement today.

Uber has only 14 days of trading history since its IPO on May 9th and investor sentiment has been less than stellar to say the least with the deal pricing at the low end of the range at $45, and actually opening down $3 from that price at $42 at its opening print and spending all but one trading day below that opening price. There seem to be sellers in and around the $42 level, despite the fact that holders who were allocated shares on the deal are locking in a loss at that resistance level: 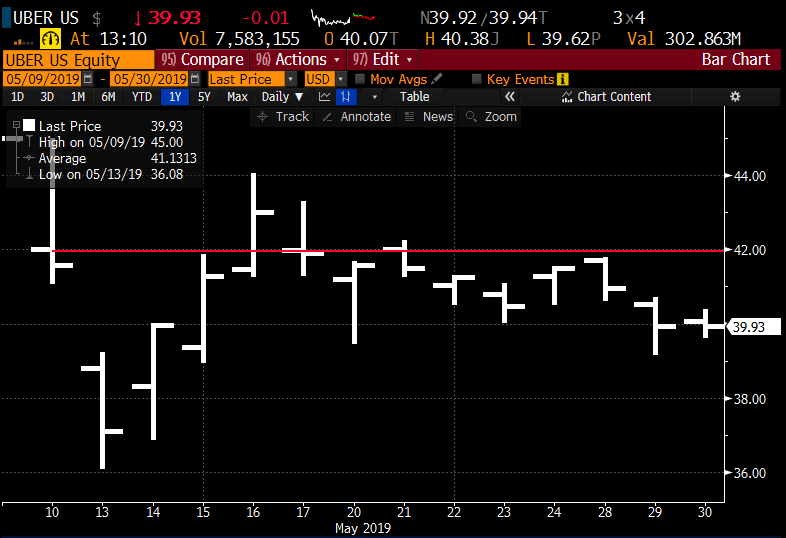 So here’s the deal… this stock is obviously a tad controversial, from its valuation to its massive losses to its price war with Lyft, to the fact that demand for the shares in the public market has been less than healthy, and of course its broken deal. But for those who have a strong directional view, buying the at the money put or call in the weeklies for about $1.50, or possibly next week for a little more makes sense if you think the stock can rally or drop at least 5% tomorrow. But I’ll offer our normal disclaimer for those looking to buy options to make a directional bet into events like earnings, you need to get a lot of things right to merely break-even, first and foremost direction, then of course magnitude of the move and timing. Your odds of picking a direction and making money are far less than 50-50 on a weekly at the money event trade.

But given the high price of options heading into the print, and the likelihood that they will come in after earnings there are a couple of options overlays that might make sense for holders of UBER stock, on to add potential yield & leverage and the other protection.

First, let’s look at a potential yield/leverage overlay against a long position... vs 100 shares of stock, a holder could look to add a 1×2 call spread, essentially overwriting their existing position (add Yield), which would allow for upside until the call strike, but then adding a call spread (add Leverage) where the short strike is the same as the strike used to overwrite the shares. Normally I would look to pick a call spread that lines up with some technical levels where I think the stock could find some technical resistance and also equals the amount of the call premium received for the overwrite, for instance:

Profits of the stock up to $45, the stock is called away at that level because of the overwrite of the shares with the sale of one of the 45 calls, but if the stock is $45 or higher you have also added a $2 gain from the 43-45 call spread, so your effective call-away (sale level) is $47

Losses of the stock below current levels, but because the 1×2 call spread cost nothing in premium terms you have not added any risk.

Profits of the stock up to $45, stock called away at $45, but the investor could always cover the short 45 call for a loss to keep the long position intact.

Losses of the stock down to 35, but protected below.

Rationale: this sort of hedge makes sense for an investor that is willing to give up some potential upside for defined risk to the downside.