TJX Companies (TJX), the off-priced retailer will report their fiscal Q1 results tomorrow morning before the opening. The options market is implying about a 4.25% one-day post-earnings move which is nearly in line with the 4% average the stock has moved the day following its last four reports, but above the ten-year average of about 3.2%. 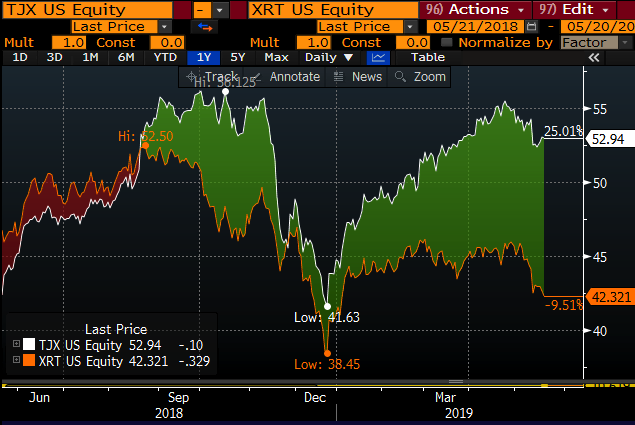 While the relative strength is nothing short of impressive, It is important to note that the stock is down about 5% from its recent highs, slightly more than the 3.5% decline in the SPX from its high on May 1st, which was a new all-time high, which  it is worth noting, TJX failed to confirm the high with a new one of its own: 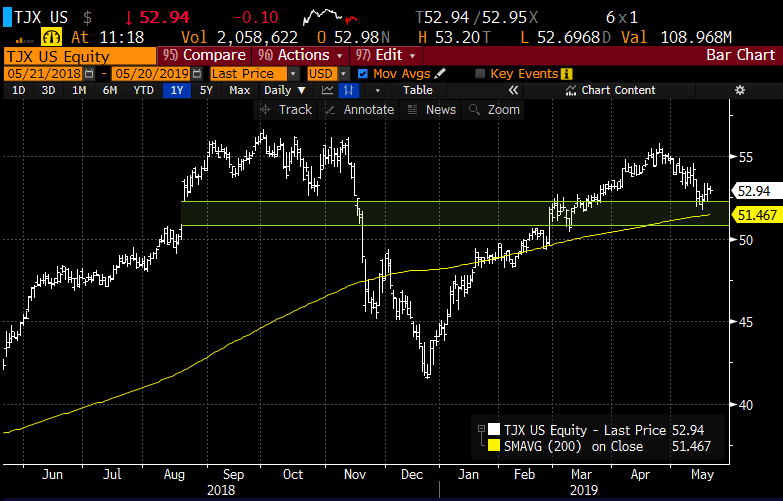 The one year chart above shows just how important the technical support is between $53 and $50, with its 200-day moving average at $51.67 and the earnings gap level from last August and the collapse level Nov 19-20, also around earnings.

Shares of TJX trade about 20x the fiscal year 2020 eps growth of only about 6% on an expected 6% yoy sales growth, which I about the midpoint of its P/E multiple over the last five years.

Wall Street analysts remain overwhelmingly positive on the stock with 20 Buy ratings, 6 Holds and only 2 Sells with an average 12-month price target of $56.33, 6% above where the stock is trading just below its all-time made on October 1st.

If I were inclined to play for a beat and raise and a move back to the previous highs I might consider the following defined risk strategy.

Rationale: this trade idea risks 3.3% of the stock price for a month into a potentially volatile event. The trade idea is already 1% in the money, so the break-even to the upside is 2.3% less the premium at risk.

Or If I thought the outperformance of TJX was about to come to an end, and a miss and guide down was in the cards I might look to play for a move back to the highs $40s…

Rationale: this trade idea risks 2.2% of the stock price but unlike the bullish trade idea, this one is out of the money and has a further break-even, down 3.1% but a higher potential payout vs the premium at risk given the out of the money nature of the idea. I guess if the stock were to miss and guide lower the reaction would likely far outperform the implied movement of 4%.