Nvidia (NVDA) will report their fiscal Q1 results today after the close. Last night on CNBC’s Fast Money I gave a short preview of the 7.5% implied move in the options market, which is a tad rich to the 7% or so average over the last four quarters:

Last night we also had James Wang, an analyst at Ark Investments who firm owns the stock and who used to work at NVDA discuss the set up into the print, and he highlighted the importance of the company at least reiterating their prior guidance for the back half of 2019:

Shares of NVDA are up about 20% on the year, despite the stock just selling off about 16% in the last month since filling in the massive earnings gap from November. The one year chart below shows the recent failure at technical resistance and the stock’s recent break below the uptrend that had been in place from the December lows: 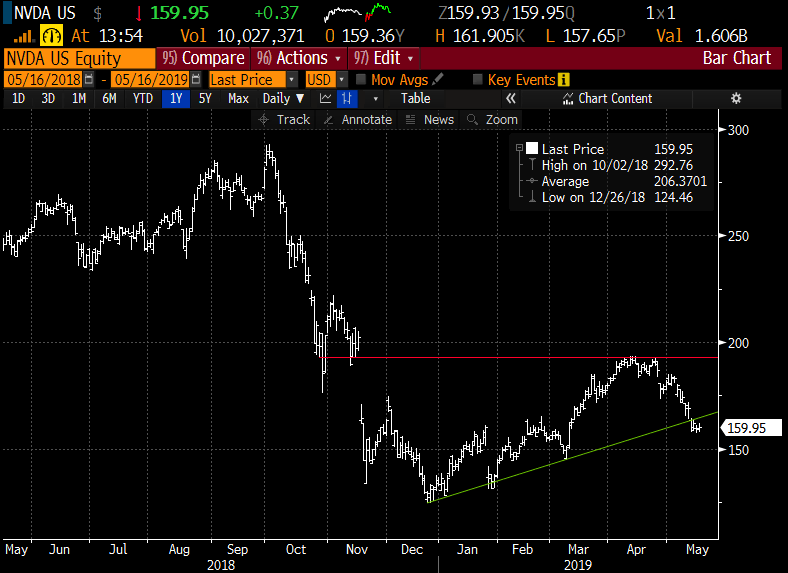 James mentioned in the clip NVDA’s balance sheet, that they “are flush with cash” which is most definitely the case with a total of $7.4 billion, or $5.4 billion net of $2 billion in debt on their $97 billion market cap. This gives them a good deal of flexibility when it comes to investing, m&a and even the potential for a greater cash return. But the stock is far from cheap trading about 30x expected FY 2020 eps and 8x expected FY 2020 sales, both which are expected to be down year over year. Last year’s implosion in the stock, nearly 60% peak to trough from early October to late December made it clear that the calendar year 2019 was going to be a battleground for the company and its stock.

So what’s the trade? If the company misses and guides down then the stock will easily be down the $12 or so bucks that the options market is implying, most possibly it overshoots to the tune of 10% as was the case in Intel and Xilinx last month, and likely on its way back towards the 52-week lows in the coming weeks/months. If the company were able to meet already lowered guidance and actually guide up for the balance of the year then the stock will be back on its way to the April highs above $190. I personally don’t have a strong view but I am happy to lay out a couple of ideas that might capture a 10% move higher or lower tomorrow.

Break-even on May expiration (tomorrow):

Rationale: this trade idea is binary, targets a 10% move lower in one day which the options market is only placing about an 11% chance of occurring and only about a 25% chance of the trade being at break-even on tomorrow’s close. Those are not great odds. So to do a trade like this one would need to have a lot of conviction.

Rationale: this trade risks 3.75% of the stock price over the next month with a break-even up nearly 7% in line with the implied move. This trade idea is far less binary than the bullish trade idea above as it allows for the trade to play out over the next month. While it is very important to get the direction right post-earnings, it allows for the other two main factors to play out; time and magnitude of the move.