Alibaba (BABA) will report their fiscal Q4 results tomorrow before the open. The options market is implying about a 5% one day move tomorrow, which is a bit rich to the 3.75% average over the last four quarters and the 4% average since its public debut in 2014. With the stock at $173, the May 17th 172.50 staddle (the call premium + the put premium) is offered at about $8.50, if you bought that and thus the implied movement between now and Friday’s close you would need a rally above $181 or a decline below $164 to make money.

Last night on CNBC’s Fast Money program I gave a short preview of the implied move and some thoughts on the technical set up:

What struck out to me was that there appeared to be lots of selling of out of the money call options in May and June expiration, possibly traders considering May 180 calls a long shot at this point given where the stock is and what the probability of it being above 180 by Friday’s close.

Here is the block trade monitor (per Bloomberg) for all trades in BABA options yesterday above 1000 contracts, when looking at the SIze column, the white indicates that they are closing, and blue indicates that they are opening, You can also tell opening when the size of the trade is greater than the OpenInt column which is six in, which indicates existing open interest.

I would then call your attention to the most active option screen (per Bloomberg) yesterday which shows the two most active strikes being the May 180 calls and the June 180 calls, while some of these might have been opening, it appears that most were sold to close.I would note that the May 180 calls yesterday had about a 22 delta, that is basically the probability that they will be in the money on Friday’s close. With earnings tomorrow that makes holding them into the print a fairly binary trade, with very low odds of success, even if you were to get the direction right.

Now to the charts, the one year shows just how important yesterday’s hold of $170 support, as I mentioned in the clip there appears to be a sizable air pocket down to the Dec / Jan double bottom low: 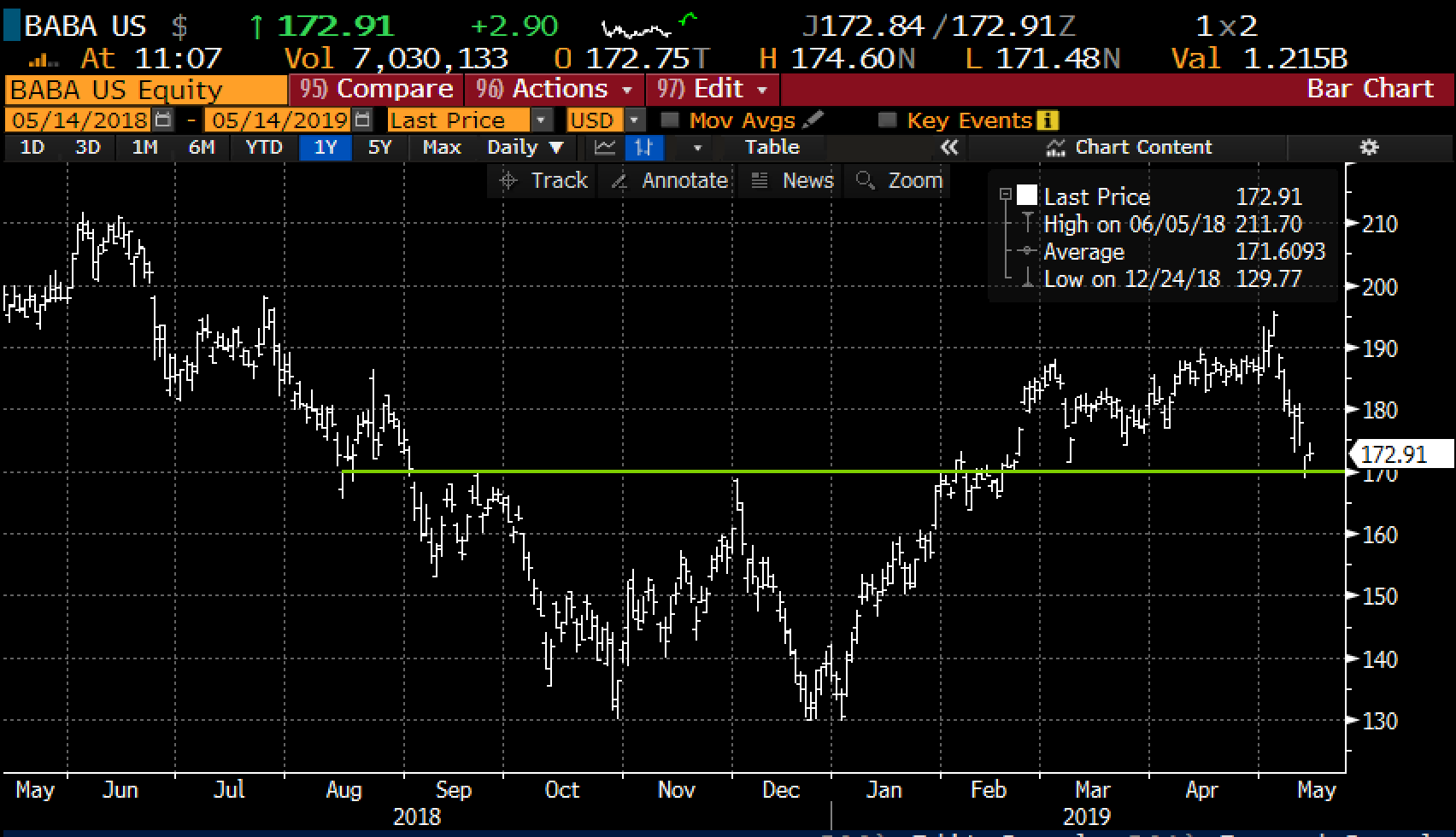 Short-dated options prices in BABA have risen steadily into this week earning, which has also corresponded with the stock’s 10% drop in the last few weeks, with 30-day at the money implied volatility rising from a 52-week low near 23% to just above 40% last week, options prices are not cheap for those looking to make long-premium directional bets:

So what’s the trade? Prior to the latest dust-up in our on again off again trade skirmish with China, shares of BABA were breaking out to nearly nine-month highs, but as I mentioned above, the stock has come into a fairly important near-term support level at $170.

If I were inclined to play for a beat and raise and a sustained move in the coming weeks back towards $200 I might consider a call butterfly in an effort to offset the fat premiums of near the money calls… for instance:

Rationale: this trade idea risks 2% of the stock price and offers a very wide range of profitability to the upside while attempting to offset the near term premium decay post-earnings. While this trade’s break-even is out of the money, if you get the direction right it has a very favorable risk-reward in my opinion if you think the stock can work its way back towards its April highs.

Or If I were long the stock, do not want to sell but worried about a miss, weak guidance and trade headlines to weigh on shares in the coming month I might consider a collar, selling an out of the money call against long stock and using the proceeds of the call sale to buy a downside put to define my risk, One would do this if they are willing to give up some potential upside in return with defined risk to a certain point… for instance…

Profits of the stock up to 190 (less the $1.50 premium paid for the hedge), stock called away above 190, or you could always cover the short call to keep the long position intact.