Last week the S&P 500 (SPX) and the Nasdaq Composite (CCMP) closed at new all-time highs, while their small-cap brethren (as measured by the Russell 2000 – RTY) closed at 7-month high, but 7.5% below its all-time highs made last August. The underperformance in 2019 has been notable: 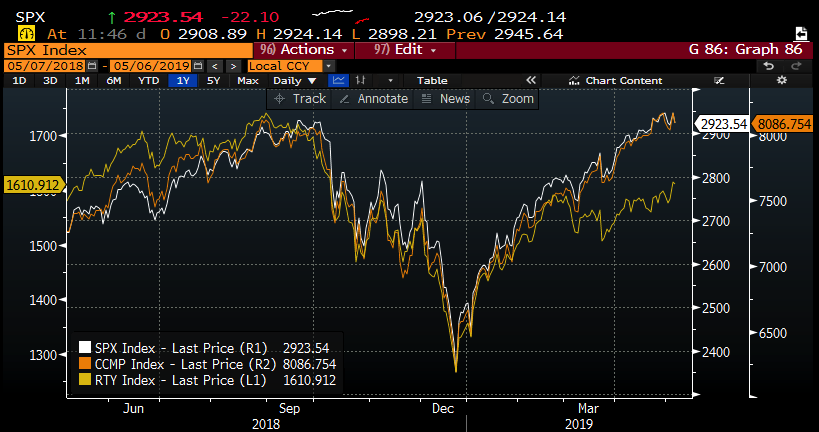 Prior to today’s pullback in global equities on trump’s threat of increased tariff’s with China, the IWM, the etf that tracks the RTY look poised to breakout and possibly make a run to its prior highs after its recent consolidation and finding some technical support at its 200 day moving average: 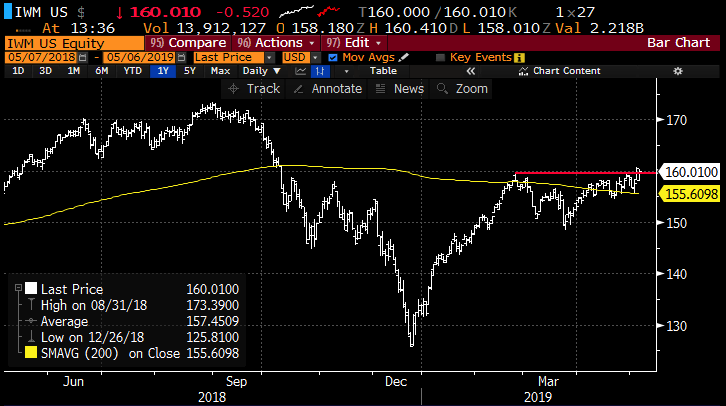 If trump’s tweets do in fact work and cause a trade deal to be consummated soon with the avoidance of new tariffs then we might see a little catch-up trade in the IWM. That said, if trump’s negotiating tactics go the way of his Nafta 2.0 or as they have with North Korea. or TPP, Iran, Paris, European trade or his border wall, then I would think that we are left with a big fat nothing-burger, and we could see global equities pullback a tad, bracing for a contraction in global growth.

Short-dated options prices look ok (not great) in IWM, with 30-day at the money implied volatility at 17% (blue line below), a good bit above realized volatility at about 12.6% (how much the etf is moving, white line below), but that is a function of today’s gap lower, and now bounce, causing realized to come in after a long consolidation, and implied vol to rise given investors concerns:

To give you a sense of what 17 vol looks like though in IWM, we can look at the June at the money straddle (the call premium + the put premium) to get a sense for implied movement ion a little more than a month… with the etf at $160, the June 160 straddle is offered at $8, or about 5%, if you bought that and thus the implied movement right now in the IWM between now and June 21st expiration, you would need a rally above 168, or a decline below $152 to make money. But if you were willing to pick a direction you would only need about $4 or a 2.5% move by then to breakeven.

So what’s the trade? I personally think there is not a high probability of a deal that both sides can feel good about in the coming months. If trump tries to walk away from these negotiations it may take some time to get them back on (see North Korea nuclear talks).  If I had a directional inclination I might look to buy short-dated near the money calls or puts and look to spread them if the etf were to go in the direction I chose. For instance, if I bought the June 160 call for $4, which has a 50 delta, which means the etf should gain 50 cents per $1 move for the time being, then I could look to lock in some of that initial gain by turning the calls into a call spread by selling a higher strike call in the same expiration. The same would be true on the put side if you are leaning lower.

The main point of the post was to highlight one simple fact, that while the IMW is actually up more than the SPX year to date, but has underperformed over the last few months as the SPX has made new highs.