Today after the close Starbucks (SBUX) will report their Q1 earnings. The options market is implying about a 3.8% move in either direction tomorrow. With the stock at $77, the April 26th weekly 77 straddle (the call premium + the put premium) is offered at $2.90, if you bought that, and thus the implied move, you would need a rally above $79.90, or a decline below $74.10 to make money on tomorrow’s close, or about 3.8% higher or lower, which is basically in-line with the average one-day post-earnings move over the last four quarters.

Shares of SBUX are up nearly 20% on the year, today making a new all-time high, besting the nearly 17% return of the S&P 500 (SPX), which is also at an all-time high. The one  year chart below shows the stock’s 62% gains from its 52-week lows made last June and the stock’s recent 10% rally in nearly a straight line since bouncing off support in March at $70: 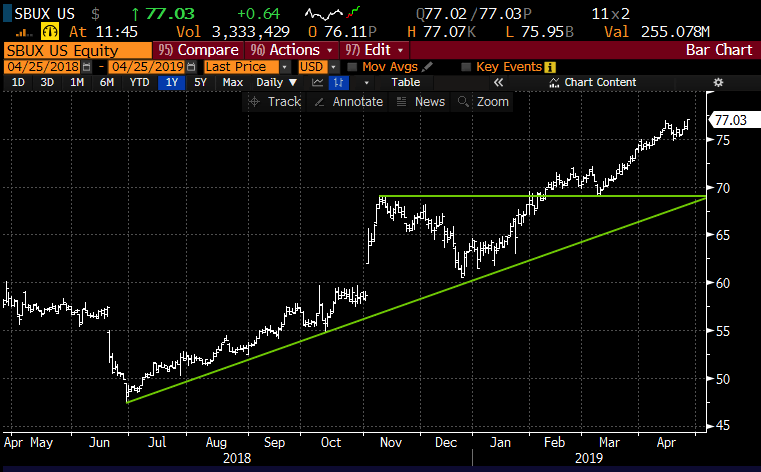 Obviously, there is no overhead resistance, but if the company’s results and guidance warrant a pull-back, then the stock will be retesting $70 in the days/weeks to come.

Despite the stock’s performance, analysts remain fairly mixed on the stock with 15 Buy ratings, 16 Holds and 1 Sell with an average 12-month price target of $73,50, below where the stock is trading. Either analysts will get their due, and see the stock come back their way, or a beat and a raise will cause some upgrades to ratings, targets and likely estimates.

I would add that eps expectations for the current quarter are fairly low, at just 6% increase year over year, which would mark the smallest quarterly eps gain in almost two years.SBUX trades at about 28x expected 2019 eps growth of 11%, which is very near the mid-point of the five-year range.

So what’s the trade? Long holders in the stock might consider short term protection. Collars, selling an out of the money call to buy and out of the money put don’t look that attractive as short-dated calls look dollar cheap. For instance, with the stock near $77, the May 80 call is 60 cents bid, less than 1% of the stock price near the implied move in the stock. That option looks like a bad sale with three weeks to expiration. The $3 out of the money put in May, the 74 put is offered at about 80 cents with the stock at $77. There is as you might imagine skew in the puts, meaning more expensive in vol and dollar terms to the calls of the same distance from spot. If a long holder were looking for near term protection they might consider a put spread in May, like the 76 / 70 for $1.25. this trade would offer profit potential of up to 4.75 between 74.75 and 70.