Intel (INTC) will report their Q1 results today after the close. The options market is implying about a 4.5% one day move tomorrow. With the stock about $57.50, the April 26th weekly 57.50 straddle (the call premium + the put premium) is offered at about $2.50, if you bought that, and thus the implied one day move (as both options expire tomorrow on the close) then you would need either a rally above $60, or a decline below $55 to make money. Over the last four quarters, the stock has moved about 4.5% the day following earnings.

One of my first trade ideas of the year on RiskReversal, and on Options Action (watch here) on January 4th, I detailed a bullish trade in chip giant Intel (INTC – Chip Rip?), which at the time was a fairly stark reversal from many of the bearish trade ideas I detailed throughout 2018 in the etf that tracks the Semiconductor group, the SMH.

When INTC was $47.50 back in early Jan I agreed with an Upgrade of the stock to a Buy rating from Merrill Lynch, and thought the stock could appreciate in the first half of the year to the high $50s, here was the trade idea:

A few weeks ago (here) I suggested the stock might be nearing technical resistance as it approaches last year’s highs and the trade idea laid out in January no longer offers the best risk-reward. Well, that was a tad early as the stock is now 5% higher, but it is worth taking a look at the technical set-up in front of the print. The stock did, in fact, make a new 52-week high last week, and is now flirting with a failed breakout: 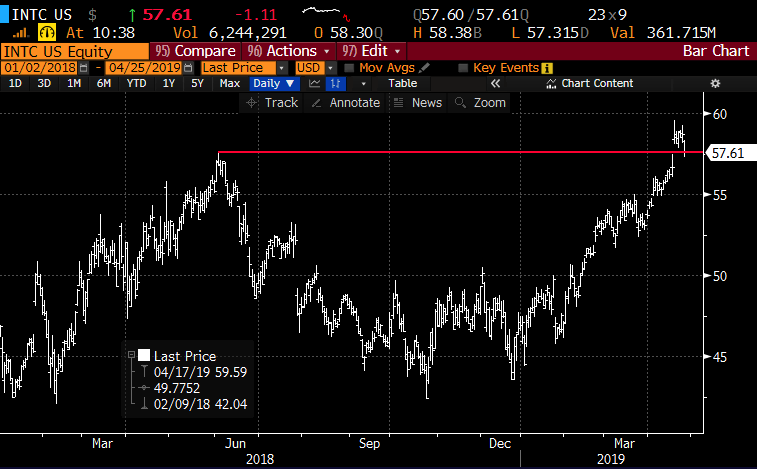 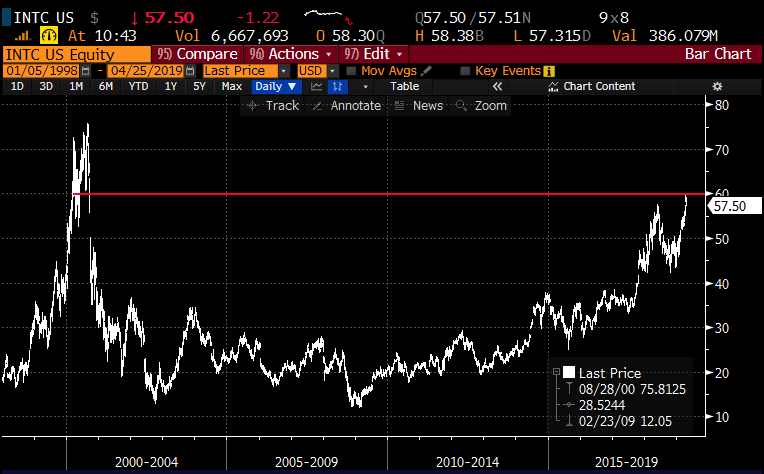 Obviously, this is a very different company 20 years on, INTC is expected to have $71 billion in sales this year with GAAP net income of $20 billion sporting a $250 billion market cap. The stock trades 12.7x expected 2019 eps that consensus has declining 1% yoy on a 1% expected sales increase.

My view into the print: some of the catalysts I highlighted in Jan have come to pass, and semi stocks this week have a slightly toppy feel this week with Texas Instruments (TXN) guidance regarding the semi-cycle taking the air out of some of the outperformance and Xilinx’s (XLNX) 15% drop today following earnings which analyst expect captures much of the near-term upside as it relates to 5G.

So what’s the trade? If I were inclined to make a bearish bet into INTC’s print I might consider a trade in the SMH, the etf that tracks the semi group for two big reasons. First, INTC makes up 13.3% of the weight of the etf, followed by Taiwan Semiconductor (TSM) at 9.5%, Qualcomm (QCOM) 6.75% and TXN at 5.6%. We have already had earnings from TSM, QCOM and TXN and I am not sure they can be of much more help at these levels. And Second, options prices are far cheaper in the SMH than they are in any of the single names. Which brings me to a Tweet by Gluskin Sheff’s strategist David Rosenberg yesterday: 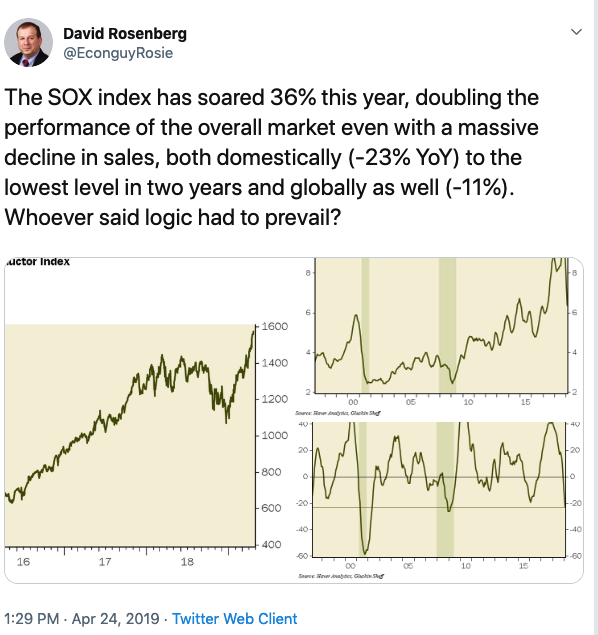 To quote the dude, this aggression will not stand man!

Rationale: this trade idea risks 2.5% of the etf price, with a break-even down 3% from the current levels that offers a profit potential fo up to 7% if the stock is down 10% in nearly 7 weeks.

This trade targets a move back to what appears to be healthy support near $106: 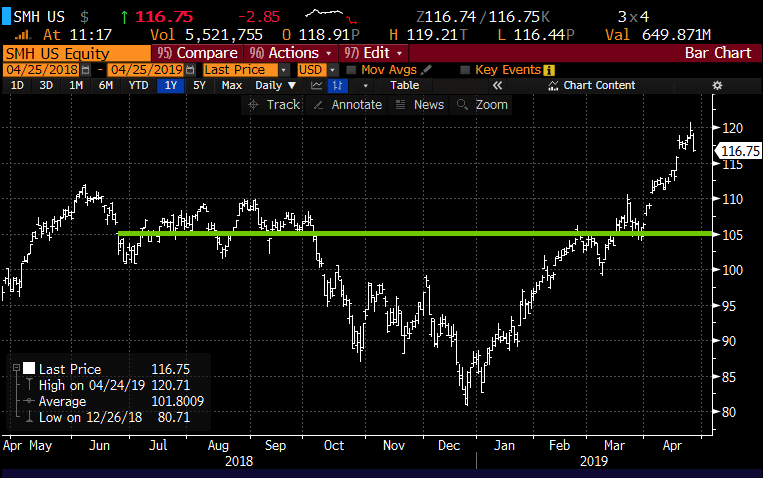