Last week Wells Fargo (WFC) CEO Tim Sloan abruptly resigned after spending 31 years at the company, and nearly three years in the top job. The stock initially rallied on the news but has since given back the gains and now investors are left to contemplate what sort of earnings and guidance the acting CEO (former General Counsel) Allen Parker will deliver when the company reports Q1 earnings prior to the open next Friday, April 12th. The implied move in the options market is about 3% in either direction, which is rich to its average move of 2% over the last four quarters but below the long term average of about 3.5%.

Aside from the company continuing to navigate the fall-out from the fake-account scandals dating back to 2016, per CNNMoney.com:

Beyond opening as many as 3.5 million unauthorized bank and credit card accounts, Wells Fargo has admitted to charging customers for mortgage fees they didn’t deserve and forcing them into car insurance they didn’t need. Some people even had their cars repossessed as a result.

More recently, Wells Fargo started refunding customers who werecharged for pet insurance and other products they didn’t fully understand. It set aside $285 million to refund foreign-exchange and wealth-management clients for incorrect pricing and fees.

And the bank discovered that some workers altered documents about business customers — a finding that reportedly sparked a Justice Department investigation. (The department declined to comment.)

Worse, in early August, Wells Fargo said it was “very sorry” for a computer glitch that caused hundreds of people to have their homes foreclosed on.

And the subsequent penalties and restrictions that have been placed on the bank remain an overhang to growth. The WFC board likely learned that they now have to find an outsider to right the ship, which might be harder and take longer than they would like as the new CEO will want assurances that the worst is behind them. Which is one reason why the interim CEO might want to get as much news out of the way as quickly as possible.

Adding insult to injury is the backdrop of a very flat yield curve putting pressure on net interest margins, the differential between what the bank borrows at and lends out at. The steeper the curve the better for a bank like WFC. At just below 16 basis points, the spread between the 10-year and the 2-year U.S. Treasury is the opposite of steep and the possible inversion of the curve has been a good predictor of recessions 12 to 18 months out: 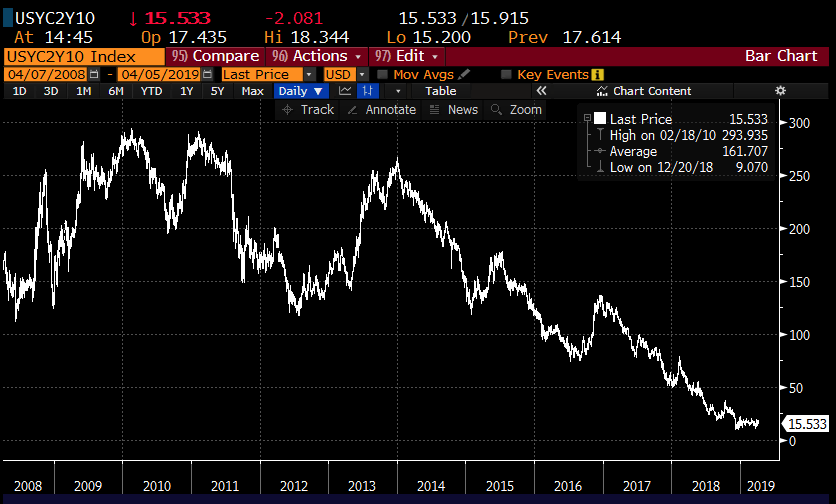 In the past couple of weeks, we have gotten some mixed data on the health or the wear with all of the U.S. consumer, as I mentioned last week:

Despite the strong University of Michigan Consumer Confidence reading on March 15th, “a measure of buying conditions for long-lasting goods fell to the lowest since 2015, suggesting consumers are reluctant to tap their rising incomes to make big purchases”. This is interesting because this can be a precursor to broader consumer weakness when consumers balk at making large purchases. US Autos sales are expected to decline by 2.5% in Q1 while Pending home sales dropped last month for the tenth time in the last twelve months, despite a sharp drop in mortgage rates this year.

Oh and while U.S. banks stocks generally underperform the broad market, WFC has been a disaster from its 2018 August highs, down about 18%. The chart of the stock over the last four year’s shows a textbook head and shoulders top with resistance at $50 and support down in the mid to low $40s: 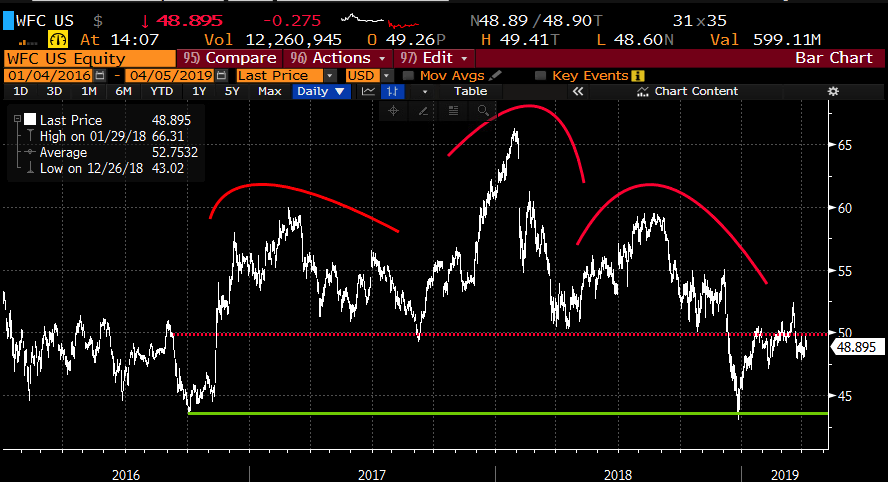 The ten-year chart shows last year’s break of the uptrend that has been in place from its financial crisis lows: 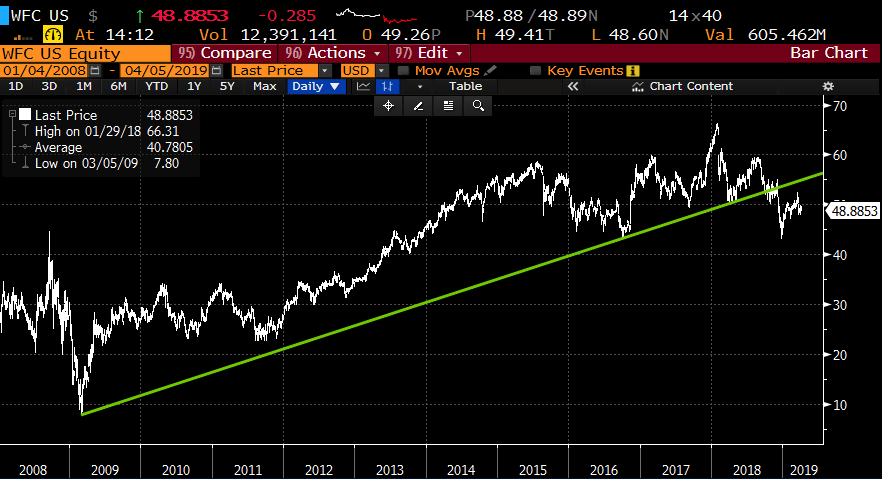 So what’s the trade? If I were inclined to play for a disappointing Q1 and weak forward guidance I might consider the following put spread:

Rationale: this trade idea breaks even down 4% from the current stock price and offers a potential 3 to 1 payout if the stock is down 8% in a little more than a month.