Back in November, I took a look at the homebuilding space (Home is Where the Heart is?) highlighting a contrarian call from research house Funds that on the group:

At the time I highlighted a defined risk trade idea to play this range in the ITB, the iShares Homebuilder etf when it was trading at $31:

If I were inclined to play for a close to 20% pop in the ITB between now and April expiration I might consider a call spread, targetting Fundtrat’s work, which lines up with upside technical resistance, while also limiting risk above key technical support where the ITB etf might have an air pocket below if this is, in fact, the ‘big one”:

Now with the ITB this trade is worth about $4.20, trading like stock. At this point, this spread is risking $4 to possibly make another $2, not a great risk-reward anymore. It makes sense to take the profit and possibly roll up and out.

Which got me thinking about some usual call activity in the ITB. When the etf was trading $34.60 earlier this morning, there was an opening buyer of 5,000 of the April 12th weekly 35 calls paying 63 cents to open. These calls break-even at $35.63 on April 12th close up 3% from the trading levels. With the stock at $35 as I write, these calls are now worth 85 cents.

Which brings to why someone might be targeting further upside for the next few weeks. Two of the ITB’s components KB Home (KBH) and Lennar (LEN) report Q1 earnings this week:

The chart of the ITB, why might one define their risk into homebuilder earnings? After a sharp bounce in January and February, the ITB as consolidated at what some might see as 9-month resistance: 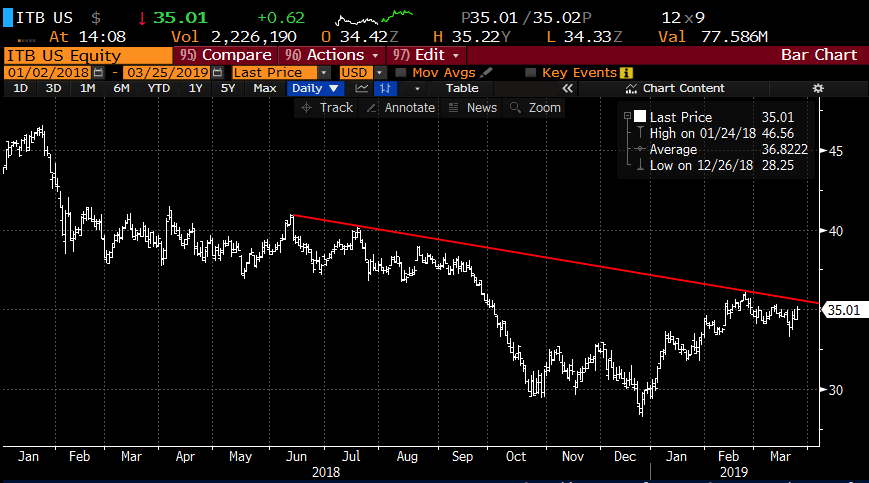 The five-year chart shows the recent consolidation above the massive downtrend from the Jan 2018 highs, but also the air pocket back towards $30 on the downside, which was also the 2017 breakout level that yielded a one year gain of 50%: 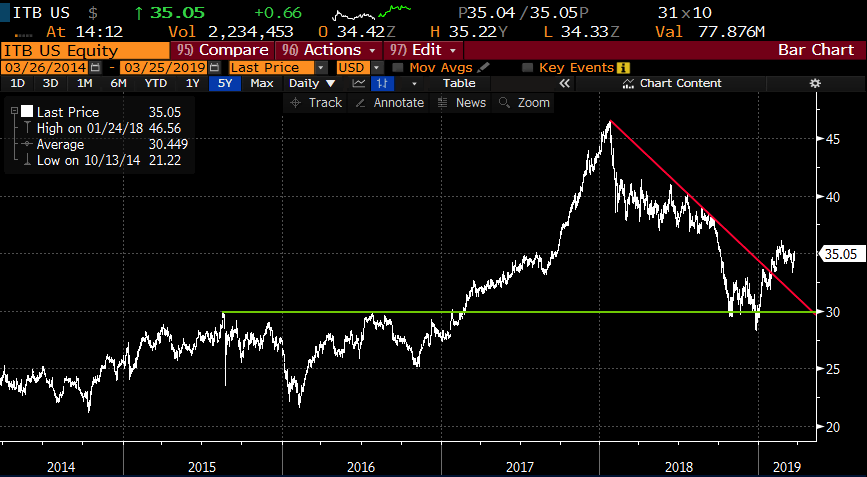 If I had gotten this trade right from the lows in Dec/Jan, I might consider short dated calls or call spreads playing for one last breakout above the recent consolidation into the end of the seasonally strong period identified in Nov by Fundstrat, helped on by better than expected earnings and guidance at a time where declining interest rates are giving the space a bid.