Yesterday on CNBC, hedge fund manager Kyle Bass of Hayman Capital in an interview with Brian Sullivan warned that the likelihood that the U.S. avoids a recession in 2019 as Europe and Asia appear headed towards one seems well, unlikely. The notion that the U.S. could somehow de-couple from a global recession is one that has been disproved on almost every occasion over the last couple of decades. Last night on CNBC’s Fast Money we discussed some of Bass’s thoughts, with me squarely agreeing on most points except for one big one (which I might be reading wrong), Bass only sees a “minor pullback” in U.S. stocks in 2019, outperforming Asia and Europe in the case of a global recession. Does he mean a minor pullback from current levels, with the S&P 500 (SPX) up 11% on the year, or an actual decline on the year (albeit minor), which would be a good ways away??

It’s my view that if we remain on global recession watch for the rest of 2019 (something that most economists see less than a 25% chance of occurring). stocks the world over would start giving back much of their gains on the year if the data started to point to a sustained downturn, then SPX would most likely be testing their Christmas lows… nearly 15% from current levels. And that might just be the start given valuations of much of the leadership in the U.S. which has powered this year’s gains.

My biggest takeaway though was Bass’s suggestion that bonds, I suppose he means U.S. Treasuries would be the play… as the Fed’s next move would be rate cuts and possibly bringing Fed Funds back towards zero, and they are long “a lot of bonds”. Obviously, he is just one man, with one opinion, and it is a bit contrarian, but an opinion that I have been kicking around myself since the Fed’s about-face pivot earlier this year on rate policy. Its been my view for years as the Fed ended quantitative easing (QE) in 2014 and then ending their zero interest rate policy (ZIRP) in 2015 that their ability to materially reduce their $4.5 trillion balance sheet of assets accumulated since the start of QE in 2008 would massively strain their ability to get Fed Funds back anywhere near “normal” but clearly nowhere near their prior highs above 5% in 2007 and above 6% in 2000. That inability would obviously weigh on the long term trajectory of interest rates, which has been lower… and that we are likely to see zero or negative interest rates far more frequently in the decades to come than we have in the past 100 years.

For only a few months it appeared that the yield on the 10-year U.S. Treasury looked to break the 30-year downtrend, which it is now flirting with breaking back below. I think it is safe to say that every test of that trend resulted in a new low and a big failure here at what might be an inflection point in the global economy, in a month that marked the 10-year anniversary of the stock market bottom in the great recession might prove to be critical for rates for quarters, if not years to come. 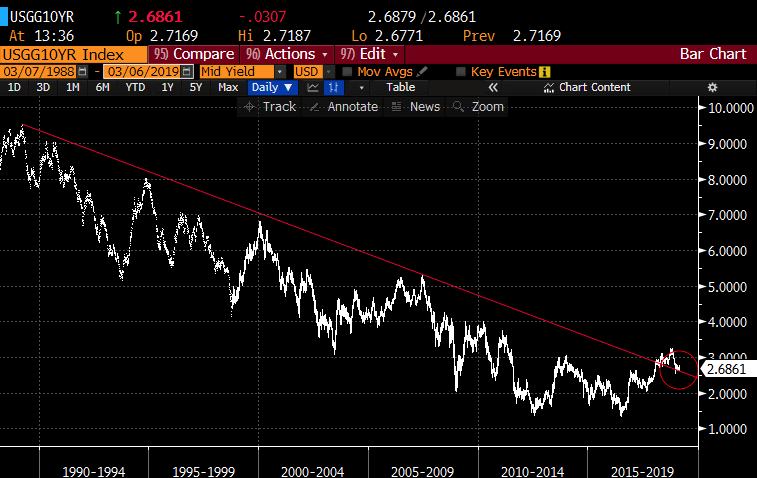 Back in September of 2018, I made a contrarian bullish case for US Treasuries, using the 20-year bond etf as a proxy, citing the following reasons:

One reason for a more muted approach to higher rates is the potential for a cooling in the U.S. economy in 2019 after 2018 was marked by the sugar high of the tax cuts in late 2017 that are likely to face difficult comparisons on the data front with the backdrop of slowing global growth.

It seems like all at once, with the spread between two and ten-year treasuries at its tightest (25 basis points) since pre-financial crisis, generally reflective of the surge of the two treasury at levels not seen since 2007 as the ten year treasury approaches 5-year resistance just above 3%, we might have seen expectations for faster near-term growth get a little over exuberant. Especially when you consider the backdrop of a growing trade spat with allies like Canada and Europe and political and economic adversaries like China having the potential to put the nail in the coffin of the economic recovery since the crisis that is aging into one of the longest over the last century. Oh and let’s not forget how the mid-term election results might cause investors, and ultimately the Fed to take a slightly more dovish tone on rates tone depending on the outcome.

Wow, pretty much nailed that (despite the timing on my trade idea just a few weeks early)… but the TLT has found some technical resistance since last fall’s bounce, but over the course of the last year at $122.50-ish: 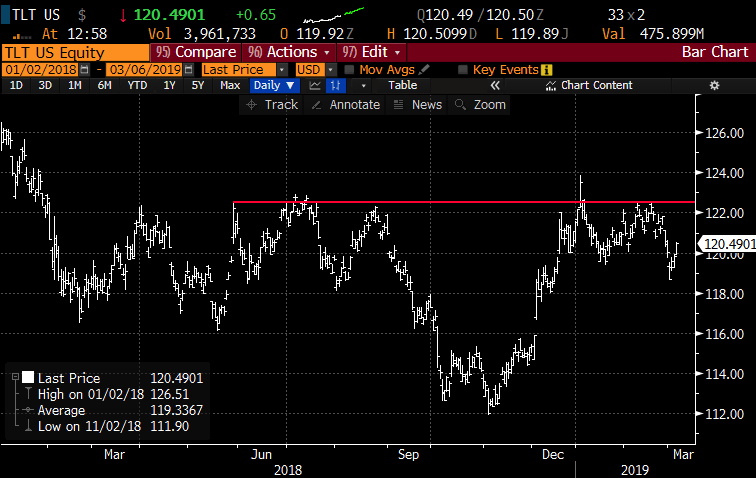 Which brings me to a story this morning from Bloomberg catching some attention, and causing some to believe that a trade deal with China might not cover the major issues at the heart of our longstanding issues… Trump Pushes China Trade Deal to Boost Markets as 2020 Heats Up… the issue here is that he wants a win so badly that a less substantive deal will only really address the trade deficit and those changes might already be incorporated in market participants expectations and it may not provide the sort of stimulus that the global economy needs after a period of softness, that was caused by trump’s insistence in tariffs in the first place. Oh and not just with our adversaries like China but also the steel and auto tariffs with allies like Canada, Mexico, and Europe. If a trade deal is the last potential positive catalyst to spark a global reflation in growth, then a half baked trade deal is likely to be a big flop and fending off a recession in Europe and Asia seems unlikely, and you know what comes next… the U.S.  To combat that the Fed will get more dovish, rates will go lower while we also see a potential flight to quality in U.S. Treasuries as we normally do in periods of global economic strife.

In that scenario, short-dated options prices in the TLT are some of the cheapest on the board with 30-day at the money implied volatility at just 8%:

So if the directional call is correct in the coming months, and options prices are cheap for directional bets, then it makes sense to target a breakout above resistance at $122.50 and play for a gap-fill back towards $130 from late 2016 drop that followed trump’s election: 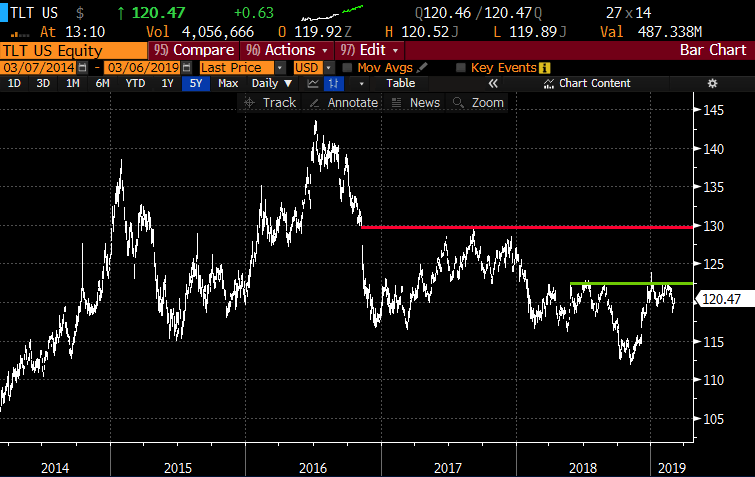 So what’s the trade? If you are looking for ways to play greater financial market volatility in the coming months, TLT vol is some of the cheapest you will find. But for the ETF to appreciate we would likely need to see an increasingly dovish Fed which would likely be a reaction to a weakening global economy. You could bet against stocks, but options premiums are a bit more expensive than the TLT…

Rationale: This trade idea risks 1.25% of the ETF price, with a break-even up 2.5% with a max potential payout of a little more than 4x the premium at risk if the ETF is trading near a two year high. The options market is saying there is about a 33% chance that this trade is break-even on June expiration and 10% chance that it is worth its max at $130.