Back on Nov 30th, I laid out my near term bearish view on bank stocks (Bank Stocks… The Good, The Bad and The Ugly). At the time much of my focus was on the group’s year to date relative underperformance, and more importantly, the Fed’s messaging on monetary policy tightening:

It’s been my view that for the Fed to back off of increases before the Fed Funds rate was at least above the inflation rate that it would likely signal a downgrade of the U.S. economy, that is in the 10th year of the longest economic expansion in 100 years. Its also been my view that the relative underperformance of banks stocks in 2018 has been signaling that an economic recession is likely to come sooner than most economists think, as investors should be piling into this group given the promise of the fiscal stimulus of last year’s tax cuts and a tight labor market. But this has not been the case, aside from JPM’s 3% year to date gains, basically, in line with the S&P 500’s ytd performance, many in the group are in severe correction territory.

Well, that correction that I referred to, quickly turned into an all-out crash with stocks like Citibank (C), the one that the post was focused on for the purpose of a trade idea, dropping 25% from Nov 30th to its low on Christmas eve: 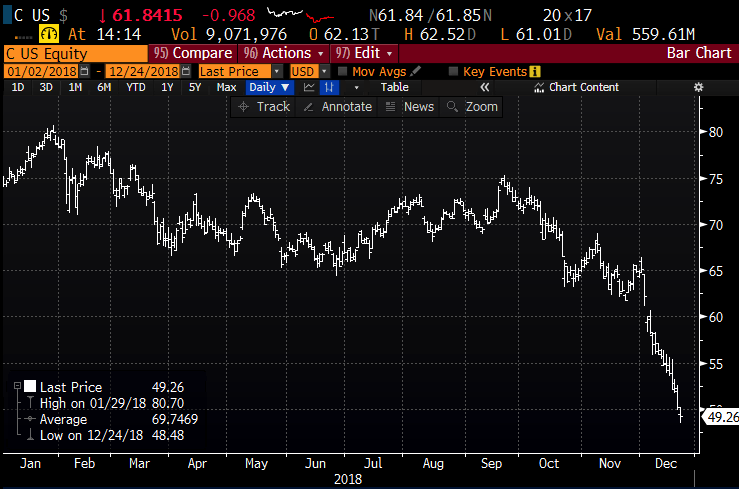 Why focus on Citi then?

Citi (C) stands out to me as a stock that could be vulnerable into the new year. On valuation it is the only major U.S. money center bank that trades below its book value, I suspect that is for good reason.

And, if DB were to cause a sort of contagion in the Euro banking sector, or if the trade war with China and possibly Europe were to cause a global growth scare, Citi’s exposure outside the U.S. would quickly be viewed as a liability.

To be clear it is NOT my view that any of the major U.S. banks have anywhere near the exposure to a global economic downturn that they did a decade ago, their leverage is infinitely lower, with what appears to be far less exposure to perceived “risky assets” in what was then a massive asset bubble.

But it is my view now that if the rumors are true that Deutsche Bank (DB) will soon be forced to merge with Commerzbank (who the German government still owns a chunk from its financial crisis bailout) in an effort to shore up its perceived vulnerability from a capital perspective…. that this will not be viewed as a sigh of relief, and more like sweeping something under the rug as was thought to be the case in March of 2008 when J.P. Morgan bought the distressed Bear Stearns in a sort of forced marriage.

To be very clear, it is not just DB that should spook investors… the SX7E, the Europ Stoxx Bank Index looks like unholy death, banging along the bottom of decades-long lows: 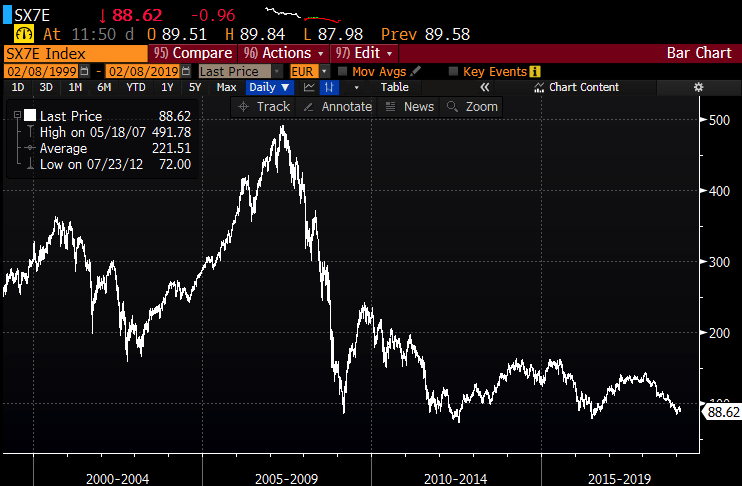 It also struck me that yesterday in the U.S. two of the largest regional banks, BB&T and Suntrust agreed to an all-stock merger of equals valued at $66 billion, making it the sixth largest bank in the U.S., the first mega-deal since the financial crisis when such deals were not done out of strength, or with any foresight, aside from survival. 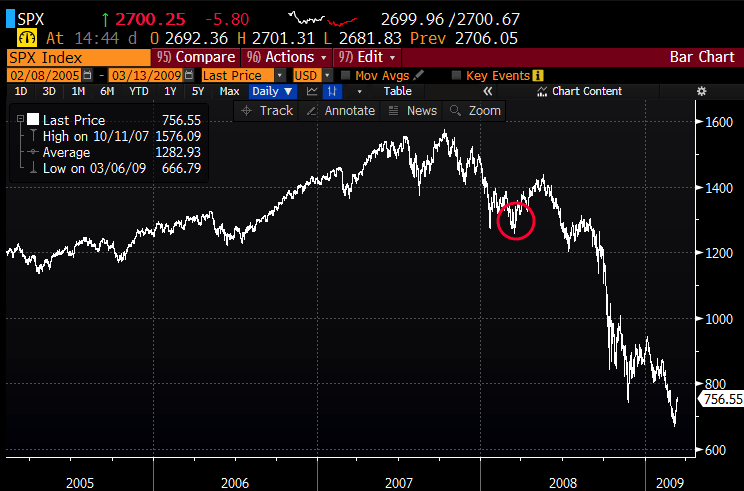 And lastly, the Fed just did an about-face on their tightening plan, they did so for a bunch of reasons, but most are tied to the fact that U.S. stocks started going down fast in the back half of 2018 for fears of a global recession. The worry was that their tightening might hasten a recession in the U.S. But the main point is that they stopped tightening because of the downgraded view of the global economy in the 10th year of the longest economic expansion in the last ten years. The chart of the 10-year treasury yield below is less than bullish for equities and the U.S. economy in my view as it reflects the late cycle nature of our economy. Just as some were calling the 2016 yield lows a generational bottom, we might have just topped out above 3% at what could be a generational top (the same spot we topped out in late 2013 / early 2014 during the taper tantrum. 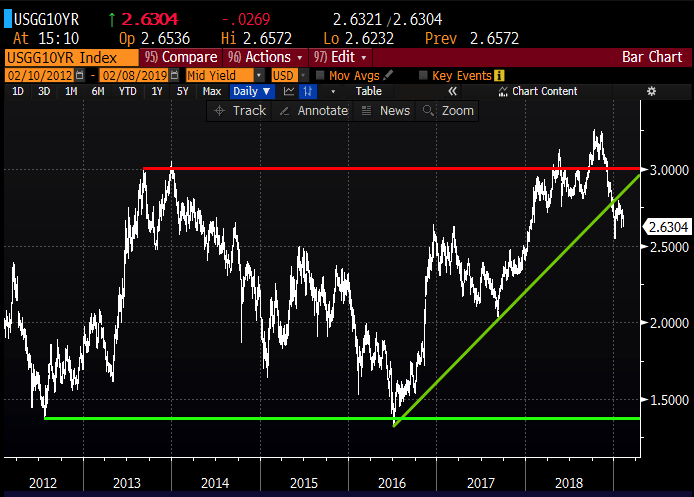 Lastly, as long as we are talking about generational moves, look at the thirty-year chart of the 10-year U.S. Treasury yield, it has been trending lower for a generation, maybe the recent break above was the most epic of failed breakouts? 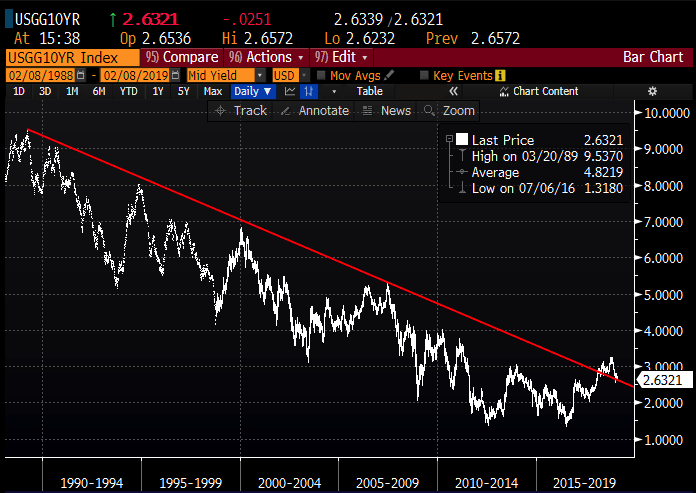 Back to CIti… over the next couple months, U.S. banks will be preparing for their annual stress tests, and any further volatility in global markets, concerns about trade disputes dampening already weak global growth, another U.S. govt shutdown, and forced mergers of  weak European banks, and we might see U.S. bank stocks lead on the way down back to the December lows.

Citi was one of the hardest hit U.S. banks in Dec, and it had one of the sharpest rallies back, nearly 33% to its one-month highs made last week. The stock was rejected though right below where one might have expected. $64-$65 appears to be formidable technical resistance: 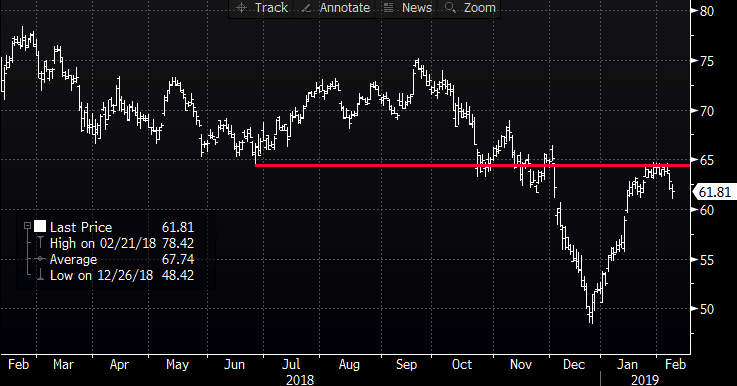 Now what? I think a similar stance to the one I took in late November makes a lot of sense, and picking on the one name perceived to have the most exposure to external factors makes sense, despite cheap valuation relative to peers (again, likely for good reason).

The next identifiable catalyst for Citi will be their Q1 results on April 15th. So what’s changed since Nov 30th, the last time I wanted to short CIti with defined risk? Well quite simply and very importantly, the Fed is out of the way as it relates to rate increases, which at one point in 2018, fed funds was pricing three quarter-point hikes in 2019. They are still reducing the size of their balance sheet, but even that the Fed has suggested they can stop at any moment. Beyond that, prior to this week, there was some optimism that the Govt would not shut down again and that we would make some sort of agreement on our trade dispute with China, pushing out more and higher tariffs. But reporting in the last couple days suggests that there might not be much progress on either, one reason for the weakness this week in equities, and for that matter treasury yields and oil.