On Friday my friend and market prognosticator extraordinaire, and founder of institutional research & strategy company Fundstrat Global Advisors, Tom Lee wrote an interesting contrarian report about one of the worst performing groups in the U.S. stock market, the homebuilders. Tom has graciously allowed me to repost the bullet points of Fundstrat’s call that homebuilders as a group, near 52-week lows could be set up as a great long entry given historically positive seasonal performance between late October and late April over the last nearly two decades (listen to Tom discuss it here): 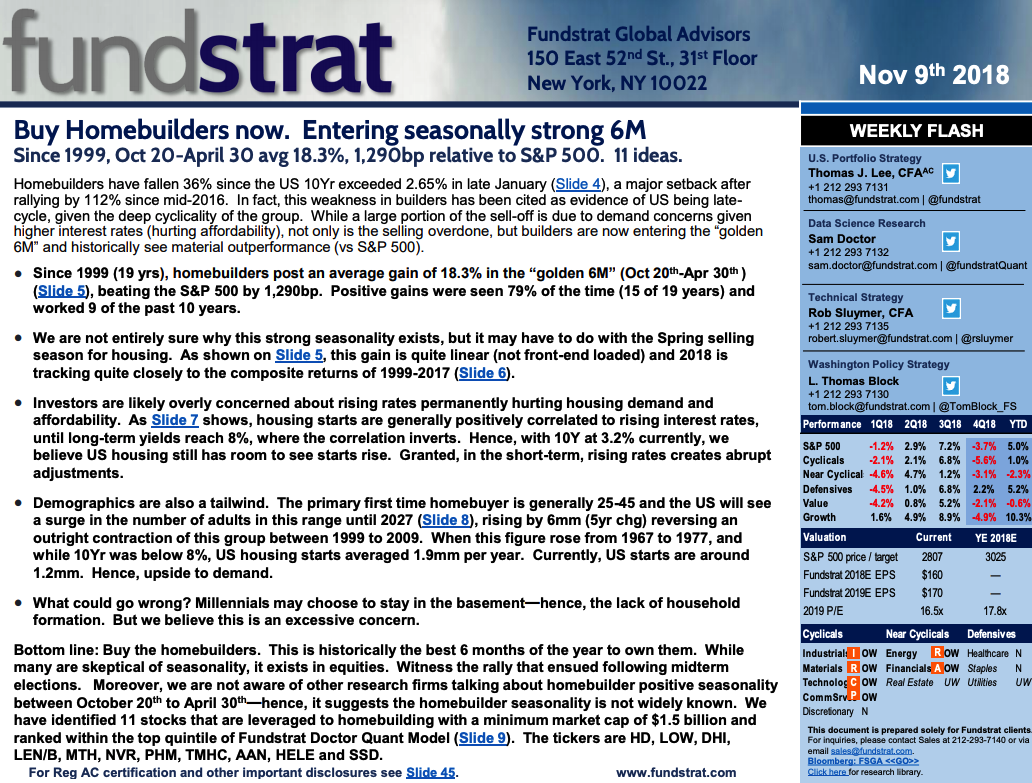 If I were inclined to make a bullish bet to the tune of 20% in this group over the next five months I might certainly look to take out the idiosyncratic risk of playing a single name and use and etf to express this view like the ITB, the iShares U.S. Home Construction etf, where the five largest holdings are the five largest U.S. homebuilders, make up 37% of the weight of the etf, followed by some home improvement stocks like The Home Depot (HD) and Lowe’s (LOW) and other smaller homebuilders and building supply cos, per Bloomberg:

Shares of the ITB are down 28% year to date, and down 34% from their 52-week and post-financial crisis highs made in late January and have now come back to what might be deemed as important technical support at the early 2017 breakout after a multi-year consolidation: 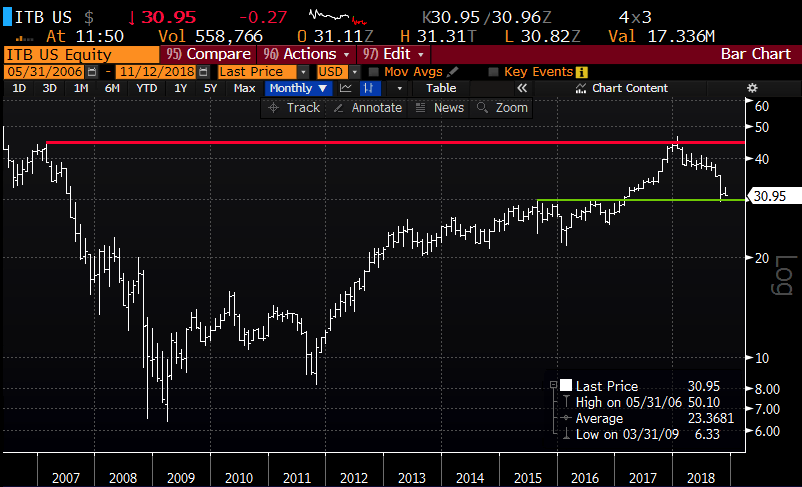 Despite what might appear to be a severely oversold condition, very poor sentiment and a questionable homebuying backdrop giving rising mortgage rates and issues with supply affordability, for those considering the seasonal trade detailed by Fundstrat, it might make sense to define with one’s risk with options. But here is the rub, while the underlying homebuilding stocks are cheap on valuation, short-dated options prices have spiked following weak results that sent many of the stock’s to 52-week lows, and obviously, ITB options have followed suit, with 30-day at the money implied volatility (the price of options) rising 50% in the last two months, despite being down 20% from the recent highs:

It’s worth noting that since the financial crisis short-dated options prices have gotten to the mid to high 30% range on almost every year during the recovery, usually bouncing off of about 20%:

What this means quite simply is that those vol spikes likely corresponded with sell-offs in the etf… but look at the chart above, it appears that in most years short-dated options prices have moderated in the period that Fundtrat suggests has been seasonally strong foe the stocks in the group. What that would mean to a trader is that as vol comes done, the sell-off is likely to have abated in the underlying, and the lower vol goes the higher the underlying goes or at least its decline has stopped.

Taking a look at the one-year etf chart a bit closer, $30 is clearly near-term technical support: 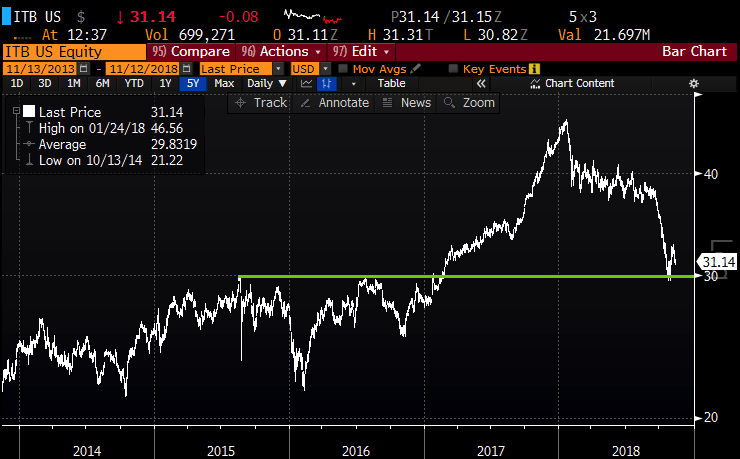 But here is the thing about options, using vol levels to help choose entry points for stocks can be helpful, but doing so with options can be a tough way to make a directional bet, you may get the direction right, but the timing and magnitude of the move wrong, and overpaying for options making directional bets can be a tough way to be right in the stock market. Which is one reason we like to use technicals to help inform our choice of strikes.

For instance, with the ITB at $31.11, the April 31 calls are offered at about $2.50, if you bought those looking to play for what Fundstrat says historically has been an 18% move on average since 1999 between Oct 20th and April 30th you would need the stock to at least go to $33.50, or about 7.7% higher than current levels. 18% higher from current levels is about $36.60, very near the technical support from the Spring/Summer, which would now serve as technical resistance: 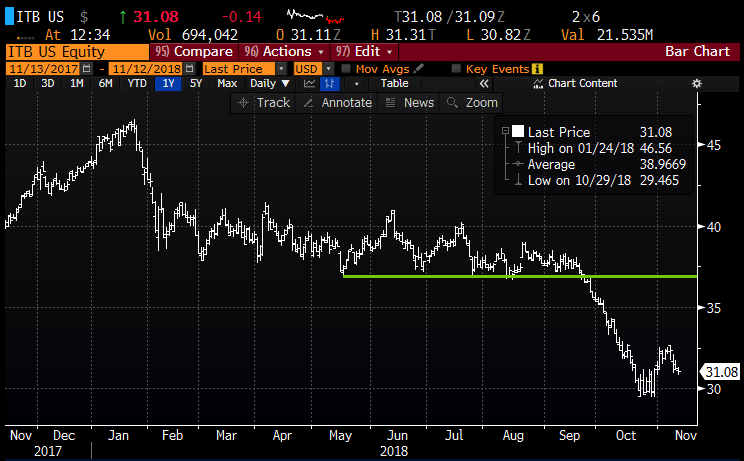 So what’s the trade? If I were inclined to play for a close to 20% pop in the ITB between now and April expiration I might consider a call spread, targetting Fundtrat’s work, which lines up with upside technical resistance, while also limiting risk above key technical support where the ITB etf might have an air pocket below if this is, in fact, the ‘big one”:

Rationale: this trade idea risks 6.5% of the etf price over the next 5 months targeting a 20% move higher in that time period. Risking 2 to possibly make up to 4. The options market is saying there is about a 42% chance this trade will be break-even on April expiration, and about 18% chance that the stock will at max profit potential at $37. So in plain English there is an 18% chance of a 19% gain in this trade. Not a fantastic risk-reward, but if you agree with Fundtrat’s multi-factor call, this is one way to do it with defined risk than a 42% chance of break-even on April expiration as you enter this trade is not bad at all.

To be clear, this is a contrarian trade, and the seasonality might still play out, but it might happen from much lower levels in the etf. This uncertainty might justify defining one’s risk with options despite high prices, but looking to moderate some decay by the use of a call spread.