In the past two weeks, I’ve written a post on retailers (Retail Therapy), homebuilders (Clarity Begins at Home) and on Wells Fargo (WFC), the large consumer lender (Wells on Notice). In all three instances, I highlighted what might be the adverse effects of rising interest rates near term on demand, and shocker, in all three instances I was cautious on the stocks.

This weekend there were a couple articles in major financial publications that caught my eye, and support my view.

First from the WSJ, Banks Brace for the Downside of Higher Rates:

But banks are preparing for the downside of higher rates too. The average rate on a 30-year fixed-rate mortgage is 4.71%, according to Freddie Mac data released Thursday, up from 3.95% at the beginning of the year. Already, some mortgage lenders have raised their rates to 5% or more as the 10-year Treasury yield keeps rising.

While that could spur some consumers to buy before rates potentially go higher, many would-be buyers already dealing with sky-high home prices are becoming wary of taking on a mortgage. So far this year, mortgage volume has fallen at Wells Fargo, JPMorgan Chase & Co.,Bank of America Corp. and other big lenders, according to research group Inside Mortgage Finance.

It is a hugely important question, because housing is still where the majority of Americans keep most of their wealth, and it has been a traditional bellwether for economic trends. Nationwide, sales and building permits are down. Several once soaring markets, including New York City, the San Francisco area, and Denver, have been softening. Construction activity has been slowing, too, which is a concern given the disproportionate role that home building plays in US economic growth.

No matter what the headline numbers say, 10 years after the financial crisis the US still does not have a healthy housing market, or — beneath all the debt and asset price increases — a truly healthy economy.

Indeed, the Fed’s recent decisions to raise interest rates are yet another reason behind the nascent housing decline because they increase the potential cost of home ownership.

Investors should be watching closely to see where home prices are by the November midterm elections, and whether consumer confidence remains as strong as it is today.

So in an effort to broaden this theme out a bit, or maybe put a bow on it, its worth noting that higher rates for longer will obviously negatively impact refinancing of existing homes, which could very likely weigh on retailers like The Home Depot’s (HD) sales outlook. Since making a new all-time high just above $215 on Sept 12th, shares of HD have sold off nearly 9%, just prior to the 10-year Treasury yields precipitous rise above 3% to Friday’s close of 3.23%, a 7-year high. 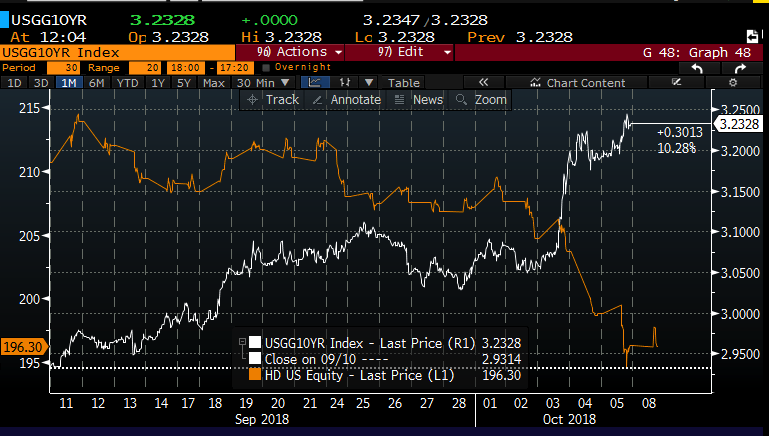 HD’s price action this year has been pretty interesting, it has essentially mirrored that of the S&P 500 (SPX) having topped out in late January but actually taking a few weeks longer to make a new all-time high (SPX did in late August, while HD did in early Sept). But HD’s sell-off has been a tad more dramatic from its highs, now down about 9% vs the SPX’s 2.5% drop in just the last few weeks since its most recent all-time high, 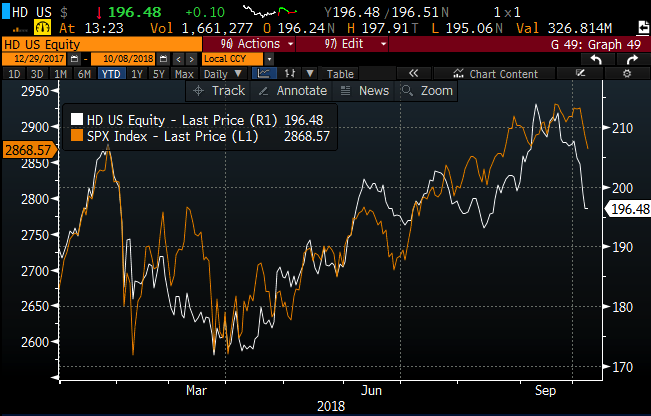 The two-year chart below shows the fairly obvious uptrend that has been in place since the 2016 election, what might be an epic double top, near-term support near $190, which also happens to be just below the stock’s 200-day moving average, and what could be an air-pocket below to the 2018 lows near $170: 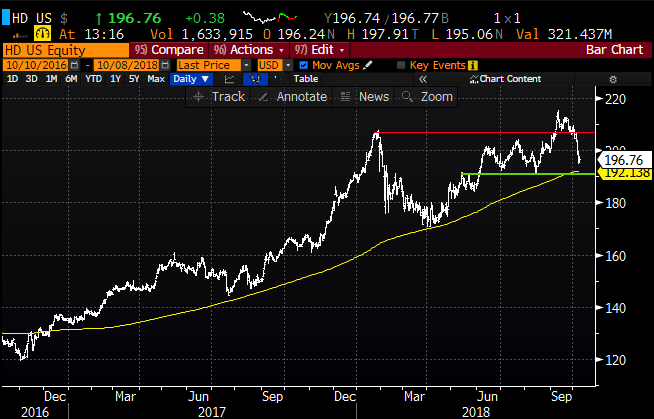 The next identifiable catalyst for HD will be their Q3 results on November 13th before the open. The stock is generally not a huge mover the day following earnings, about 2.5% average one day move over the last ten years, but with stocks moving around on rate concerns, the move in HD could come prior to results.

So what’s the trade? Let’s look at two strategies for long holders that look to take advantage of rising short-dated options prices given the stock’s recent bout of volatility targeting Nov expiration and one targeting breakdown below near-term support.

If I were long the stock, and of the mindset that the rapid rise in rates over the last month has caused weakness in stocks like HD, and that the rate of increases was to at the very least moderate, and possibly retrace a bit, I might consider adding a one by two call spread for zero cost.

Gains of the stock till 215, above 215 called away, but the effective call-away level would be 220, the width of the call spread. The 1×2 call spread serves as an overwrite to the existing 100 share position, plus an added $5 wide call spread funded by the overwrite.

Losses of the stock below current levels, no added risk by the 1×2 call spread, but profits capped.

If I were long and more worried about extreme short-term downside than a move back to or above the prior highs, I might consider a low-cost collar.

Profits of the stock up to 210 (less $1.60 premium paid), the stock called away at 210 or higher, but cal always cover the short call prior to expiration to keep the long stock position in place.

Rationale: this hedge allows for 6.5% gains to the upside, and more importantly protection down 3.5% and only costs less than 1% into a potentially volatile period with an event.

If I were looking to target a breakdown below $190, but after earnings on Nov 13th, I might look to help finance downside puts by selling shorter-dated ones of the strike… for instance…

If HD is above 190 then the short Oct put expires worthless and you are left long the Nov 190 put for $2.25. at which point depending on where the stock is, the long Nov put will have lost or gained value and you could turn into a vertical put spread by selling a lower strike put in Nov.

But a little disclaimer, this can be a tough strategy after such a sharp move, as it could feel like a bit of a press on the short side, although near-term not short that many deltas. If the stock were to quickly bounce above $200 then you likely are left long the wrong strike.